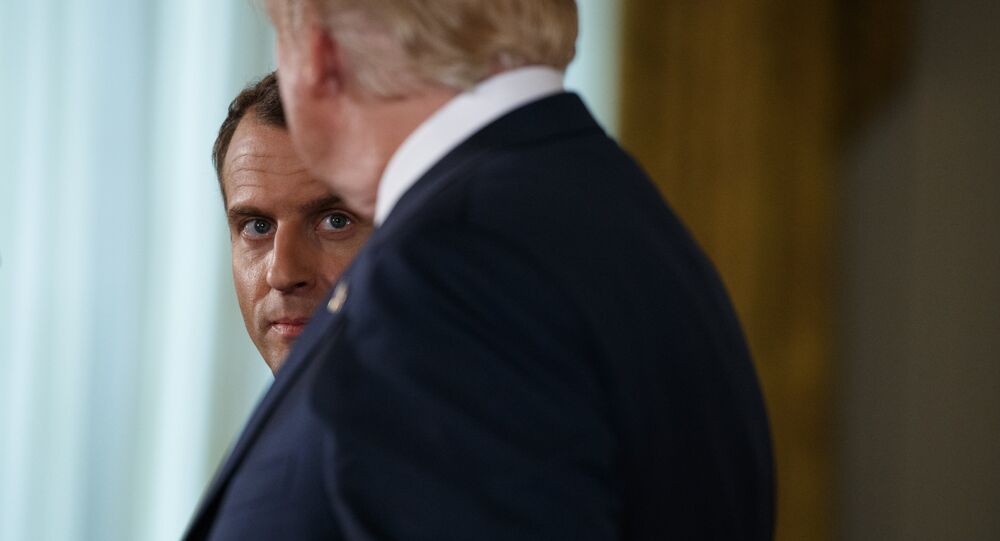 The testy slap-down by US President Donald Trump to the idea of a European army was telling. Any notion of the Europeans stepping away from American "protection" would be anathema to Washington.

That's because American power is not about "protecting" Europe. That's just the vainglorious, propaganda mythology. In reality, it's all about Washington maintaining a lucrative protection racket in Europe, imperial control over supposed "allies", and militarily targeting Russia as the main objective.

The idea for a European army was floated again last week by French President Emmanuel Macron. Macron has been particularly keen on the European Union forming its own military, independent from the US.

Speaking on a tour of World War I battlefields in northern France, Macron said: “We have to protect ourselves with respect to China, Russia and even the United States of America.”

In response, Trump immediately took Macron to task, saying his remarks were "insulting". In a subsequent meeting in Paris for WWI commemorations, the French leader appeared to backtrack under pressure, trying to assure his American counterpart that a European army would be "complementary" to the US-led NATO alliance.

Still, the proposal of Europe going its own way from the US has not been abandoned. This week, French Finance Minister Bruno Le Maire told German business publication Handelsblatt that Europe must "stand up to the Trump administration" and not be afraid to assert its own power as an "empire".

"Everybody knows it takes guts to stand in the way of Donald Trump's administration," said Le Maire in an interview. "The people of Europe have had enough of the babble from Brussels. They want to see action."

Echoing Macron's comments last week, the senior French cabinet minister said that Europe must become a "peaceful empire" in order to stand up to China and the US.

Le Maire also challenged Germany to back the French plans for creating an independent force — "political, financial and military" — from Washington. "We have talked about it for a long time. Now it's time for decisions."

These are certainly pushy words from the French leadership. But the idea of Europe taking on a more assertive, independent international role from the US has also been growing among Germany's political class in recent years. The residual shame over Nazi Germany's horrors seems to be gradually fading as Berlin strives for more global influence.

There are several factors in why the EU seems to be becoming more estranged from its erstwhile transatlantic partnership with the US. Under the Trump administration, tensions have intensified over his barracking about NATO expenditures; his browbeating over perceived "unfair" European trading practices; the threat of sanctions on Iran hitting EU multi-billion euro investments with Tehran; and the walking away from the Paris Climate Accord.

In this quarrelsome context, the notion of Europe forming its own military security organization takes on even greater appeal. France's Macron seems especially ambitious to rejuvenate European and French global standing. Having its own continental army augments that ambition.

Russian President Vladimir Putin has welcomed the proposal. Moscow views such a development as moving towards a more multipolar world and away from the unipolar would-be dominance of the US.

At a glance, one would think too that Washington might also endorse European defences being independently bolstered. After all, for years American politicians have been bitterly complaining that Europe is a "freeloader" on US military protection. Trump has taken the grievance to new heights, aggressively badgering European nations to stump up more spending on their military to "share the burden" more evenly with the US.

There is a conceited American myth that Washington is the "chivalrous protector" of Europe, as portrayed in countless Hollywood movies, such as Spielberg's ‘Saving Private Ryan'.

Since 1945, tens of thousands of US troops stationed in bases all over Europe are said to be there out of noble duty to defend allies, so goes the myth.

© Sputnik / Denis Bolotsky
NATO Chief Calls China, Russia Main Challengers in Technological Development
Such a conceited narrative is then used by Trump to castigate Europeans to spend more on defences and "share the burden".

However, notice how the American tune suddenly shifts if the Europeans actually begin to propose setting up their own defences. If the issue were all about "sharing" costs of defence more equitably, then logically Washington should welcome the move towards a European army.

But that is not the real issue. Washington would never accept Europe becoming independent in terms of military power, because military power through NATO is how the American ruling class exert their hegemonic control over Europe.

Recall that NATO was set up in 1949 in the aftermath of the Second World War with the expressed objective to, "Keep the Russians out, the Americans in and the Germans down". Note that while the civilian post of secretary general of NATO can be held by Europeans, the military organization is invariably commanded by an American armed forces general.

© AP Photo / Fabrizio Bensch/Pool
NATO Has No Intention to Deploy New Nuclear Missiles in Europe
NATO is America's "protection racket" in Europe. It has grown to a  29-member bloc which has expanded over recent years all the way to Russia's borders. This US-led military matrix sprawling over Europe gives Washington huge leverage over European policy and a vital projection of force at Moscow.

Moreover, European members of NATO are obliged to spend their military budgets largely on American weapons, including Patriot missiles and fighter jets. European nations are lined up to buy hundreds of the latest-generation and wildly overpriced American F-35 warplanes.

If Europe somehow created its own army to satisfy the vanity of politicians like Napoleonic Macron then Washington stands to lose tremendous strategic control over Europe and the latter's relations with Russia. It also stands to lose trillions of dollars flowing to the Pentagon's military-industrial complex that props up American capitalism.

Washington for all its rhetoric about "protecting allies" and "burden sharing" is not going to let that happen. European fanciful talk about setting up its own army would be viewed by US imperialism as an intolerable act of insolence. But the tensions over the issue do show one instructive thing: US relations with Europe are not the partnership. It's all about domination.