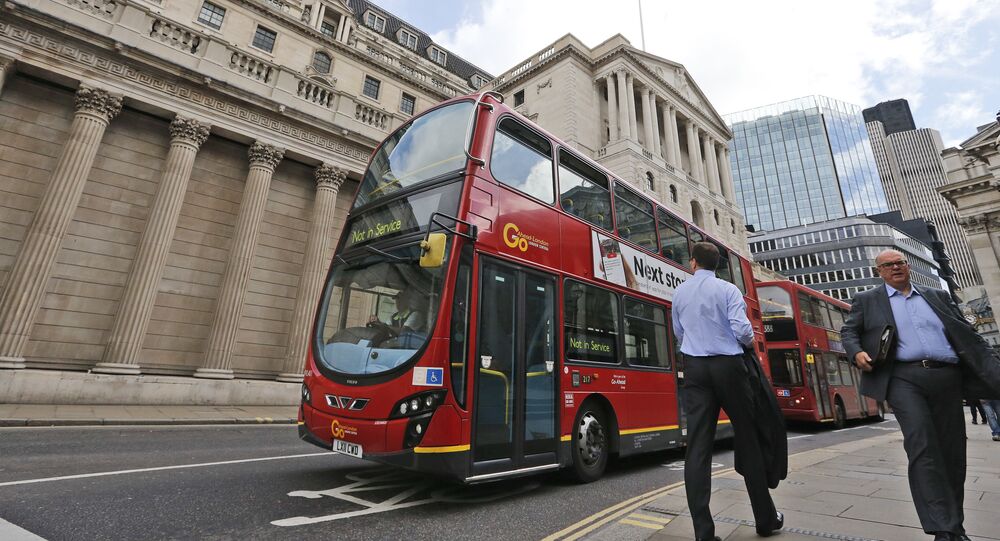 Elite interests want us to focus not on ‘bread and butter’ economic issues, but on fighting vituperative culture wars, which create much social division, but maintain the neo-liberal status quo.

Halloween never used to be that big an occasion when I was a child growing up in Britain in the 1970s, but that's certainly not the case now. It's not the only scary thing we've imported from across the Pond.

Look at how US-style identity politics and culture wars have gained ground in recent years.

Forty years ago the big political debates were economic. Keynes vs Friedman. Smith vs. Marx. Tony Benn and Sir Keith Joseph, arguing, but very politely, on the Bristol to Paddington train. ‘He said I was a romantic about shop stewards, and I said he was romantic about market forces', Mr Benn recorded in his diary.

© AP Photo / Bernat Armangue
Labour Party Delegates Wave Palestine Flags at Conference, Vote for Ban on UK Arms Sales to Israel
Today, the debate is about what words we can use to describe things. Being seen as either ‘politically correct'- or ‘sticking two fingers up at p.c' is deemed all important.

Even Brexit has become part of an increasingly rancorous liberal-left vs. alt-right culture war. Has anyone heard the nuanced, socialist case for Britain leaving the EU? You probably haven't because it doesn't fit the new paradigm imported from the US where everything nowadays is about culture and identity.

We can accurately talk about the George Sorosification of the liberal-left and the Steve Bannonisation of the Right in both the US and UK.

The pressure to join one side or the other and play the nationalist v globalist, liberal v conservative culture wars game is enormous. Nevertheless, it should be resisted.

Because if you do ‘play the game', you'll be serving the interests of capital. Don't be fooled by the rhetoric.

The disciples of Steve Bannon want us to believe they're standing up for ‘the masses' against  the likes of George Soros. But genuine populists prioritise public ownership, not obsessing about race and religion and promoting  ideas about a ‘clash of civilisations‘. In any, event the idea that Steve Bannon- like George Soros- is a tribune of the people is absurd. After all the man is a former Goldman Sachs investment banker and Hollywood producer, and you don't get much more 'insider' than that, do you?

The political battles we need to be fighting are the ones that Wall Street financiers and hedge fund billionaires don't want us to fight.

Ask yourself: how many British pensioners will have their homes adequately heated this winter, by the introduction of gender neutral toilet signage?

Dear @BarbicanCentre women's loos labelled "gender neutral" so full of men who ALSO hv a " urinal" to themselves. Totally ridiculous.

How many extra hip replacement operations will be carried out due to the removal of a statue of some un p.c. figure from the Victorian era?

How many homeless people will have a roof over their heads due to the renaming of 'Mansize' tissues?

And how many working-class families, struggling to make ends meet, will have more food on the table following a ban on the burka, as advocated by a number of right-wing politicians?

The answer to all these questions is a bit fat zero.

© REUTERS / Stefan Wermuth/Files
Labour's John McDonnell Demands to Know Why No Raid on Tory Donors Lycamobile
The more we focus on identity politics, culture wars and language policing, the less we focus on the ‘bread and butter' issues that really do matter. Which is of course what the ‘Politics of Mass Distraction' is all about. Remember the classic line from the Italian historical novel Il Gattopardo (The Leopard): 'Se vogliamo che tutto rimanga come è, bisogna che tutto cambi‘  ?

'If we want things to stay as they are, things will have to change.'

The things that ‘have to change' are the things that don't affect the economic status quo. This gives us the illusion of making ‘progress'. In fact, Sorosification and its mirror image, Bannonisation are both regressive. What we really want is what American sociologist Charles Derber has described as ‘universalising' politics.

As Steve Hall et al argue in 'The Rise of the Right', which I reviewed for Sputnik here, the left ‘must begin from the beginning again'.

If there‘s one practical, universalising policy which would make a real, positive difference to the lives of ordinary Britons-whatever their colour, race, gender or sexual orientation, it's the  re-nationalisation of the public services and utilities which have been privatised these last forty years or so. Revealingly, neither side of the UK culture wars is much interested in this. However, there are signs of hope. At this year's Labour Party Conference, Shadow Chancellor John McDonnell pledged that a ‘Public and Community Ownership Unit' in the Treasury would handle the planned return of water (in England), energy, rail and the Royal Mail to public ownership.

That return really can't come a day too soon.

© REUTERS / Luke MacGregor
'Appalling Cynicism': McDonnell Accuses Labour MPs of Using Anti-Semitism Row to Form New Party
The truth is that privatisation has delivered massive payouts to City insiders, but resulted in much higher prices and greatly reduced services to households and consumers. It's been one giant rip-off from start to finish- with the hike in the prices of postal services preceding and following the sell-off of the Royal Mail only the latest example. If anything, Labour's re-nationalisation programme doesn't go far enough. It should definitely include the buses, which are an absolute disgrace.

Earlier in the week I had to go to my local NHS hospital for a 'walk-in' — or rather a ‘hobble-in', X-Ray on my very painful foot. I was seen within minutes. But then I had to wait the best part of an hour in the freezing cold for an expensive, privatised bus. It's a waste of time looking at the ‘timetables' as services are simply cut without any warning or apology. To add insult to injury, Britain's transport operators (some of whom are subsidiaries of state owned companies of other countries!) receive extremely generous hands-outs from the taxpayer.

Yet despite the unreliable- and reduced services, the exorbitant fares and the cost of the current system, which I detailed in a previous article here, we hear nothing about Britain's bus woes from Inside the Tent media pundits. Like their US counterparts on CNN and Fox News, they are too busy fighting liberal-left/alt-right/conservative culture wars instead. No doubt they'll still be throwing metaphorical custard pies at each other as old people shiver in their under-heated homes this winter and the numbers dependent on food banks continues to soar.

But at least- looking on the bright side- we've seen through the whole charade.