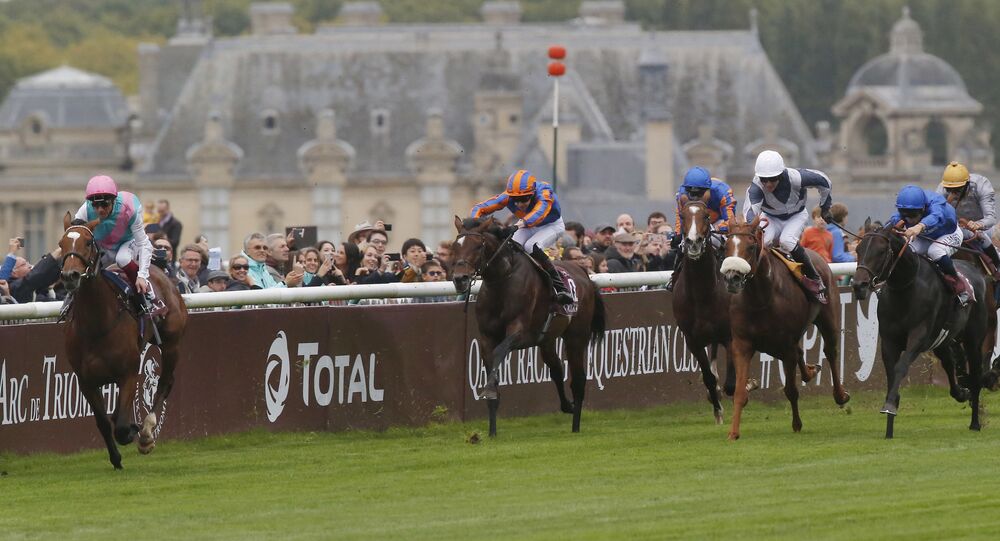 It's Arc Weekend in Paris, and Liverpool v Man City, but Who's Going to Win?

Last weekend Paris played host to the Ryder Cup, while this weekend the sporting attention in the French capital turns to horse-racing and in particular Europe's richest horse-race, the Qatar Prix de l'Arc de Triomphe, which takes place on Sunday at 4.05pm local time.

The 'greatest horse race in the world', worth a staggering £2,528,319 (yes, that's over £2.5 MILLION), to the winner, returns to a redeveloped Longchamp in the Bois de Boulogne after being held the last two years at beautiful Chantilly.

READ MORE: Despite Poor Start Europe Should Have the Edge Over the US in the Ryder Cup

The question is: how to find the winner? If Inspector Maigret, the famous fictional Parisian detective, were on the case, puffing away merrily on his pipe, he'd be telling his assistants at police HQ that age, draw, and sex are key factors to consider.

© Sputnik / Anton Denisov
The Champions League is Back, but Who’s Going to Win It?
The draw is also important at Longchamp, with a notable advantage to those drawn low. Only four horses have prevailed from a double-figure berth since 2001. There have been no fewer than four winners from stall 6 since 2004, and between them stalls 3,4,5 and 6 have provided 8 of the last 13 winners. There will be 19 runners on Sunday and the last three times that many have lined up, the winner has come from stalls 5,6 and 8. On 12 of the last 13 occasions, the race has been run on good or good to soft (the current going), at Longchamp, the race has been won by a horse drawn 1-7.

So bearing in mind those key stats, which are the horses with the best credentials? Last year's impressive winner Enable is the red-hot favourite, and clearly has much in her favour. Horses can win this in successive years, as Treve  (2013 and 2014,) has already proved this decade. Although Enable doesn't get a 10lbs age/sex allowance this time (she's now four), she still has a handy 3lbs allowance. Another point in her favour is that she has got the 'lucky' number 6 stall, but one stat she will have to overcome is that she's had only one run this season due to injury. No horse this century has won the Arc on only their second start of the campaign. Even so, she's the one they probably all have to beat. But if she doesn't make it, who can claim her crown?

© REUTERS / Fabian Bimmer
Man City at the Double? And Tips for York
The second favorite, at around 7-2,  is Sea of Class who gets the full age and sex allowances. William Haggas's filly is improving at the rate of knots and has been supplemented for this. She has a double figure draw, which is a negative, but two of the three winning draws above 10 in the race since 2001 have been stall 15. The main French hope is the Prix Foy winner Waldgeist, who looks likely to be there or thereabouts, but at much longer odds don't rule out a big run from   Neufbosc, who has some good course form, who could be overpriced bearing in mind he only finished a length and a quarter behind Kew Gardens, who's available at much shorter odds, over course and distance in July.  Last year's runner-up (at Chantilly), Cloth of Stars is drawn in 9 and could go well again, while French Derby winner Study of Man should benefit from the step up in trip and also ticks some key trend boxes, but isn't well drawn in 19. Talismanic needs to step up on form, and is a five-year-old, but conversely is well drawn in 8, and the same applies to the big outsiders Salouen (drawn 7), and Patascoy (drawn 2).  Hunting Horn is drawn 12, but he was a close second over C & D last time, and is another possible for the each-way short-list. You can see the full list of runners and riders here.

It's the last round of Premiership fixtures this weekend before another international break, and the big clash is between the top two, Liverpool and Man City at Anfield on Sunday. After a 'perfect' start Jurgen Klopp's men have had a dodgy ten days, losing at home to Chelsea in the League Cup, and away to Napoli in the Champions League. But their recent record against City is excellent- with three wins against them last season, including two at home, and victory would put them back on top of the league.

If Man Utd lose at home to  Newcastle, then manager Jose Mourinho could find his position untenable, but the good news for Utd fans is that their team is playing a side that look even more out of sorts than the Red Devils do,  with no league wins yet this season. Here are my Premiership scoreline predictions: