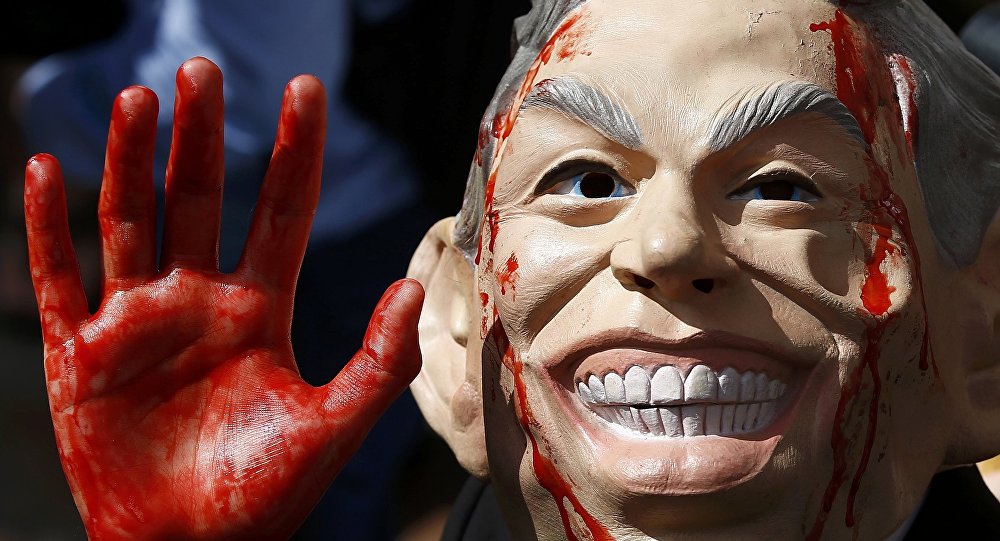 Brexit Worse Than the Iraq War? Only if You Forget the 1M Dead

It wasn’t just a crime - it was to quote the words of the Nuremberg Judgement- an example of ‘the supreme international crime’.

The US-led invasion of Iraq in 2003, sold to the public on the fraudulent claim that Saddam Hussein possessed Weapons of Mass Destruction, led to the deaths of around 1m people.

If that wasn’t bad enough, the war also spawned the genocidal terror outfit ISIS.  You’d think no one would want to downplay the impact of the war- or seek to make excuses for those who launched it. But I’m sad to report that some self-styled ‘liberals’ and ‘centrists’ in Britain are doing just that today.

On Saturday, members of the ‘Establishment Pundits Club’ were falling over themselves to laud a column by the former Conservative MP, Matthew Parris, in Rupert Murdoch's Times newspaper.

"Brexit is worse than Suez and the Iraq War" — at least Eden and Blair believed in those disasters: devastating by Matthew Parris on Theresa May's Brexit debacle: https://t.co/UuR6fX7a1Y pic.twitter.com/ab6GfkQ0dW

A column in which Parris declared, inter alia- that Brexit- which he  opposes, was worse than Suez and what he euphemistically described as the ‘adventure’ in Iraq. ‘Eden lied about Suez and his government concealed its purpose, but he believed in that purpose and believed it to be in the national interest’ Parris wrote, ‘Blair dissimulated about Iraq and his government used dark arts to clear its path. But he believed in the adventure and believed it to be in the national interest. Brexit is worse. The means are the same as with Suez and Iraq  but half of the cabinet and most of the parliamentary party don’t agree with the ends’.

Where does one begin?

The idea that implementing Brexit — for all the legitimate concerns people might have with it- is worse than lying the country into a military conflict which killed 1m is not just ridiculous. It is also obscene.

Even the worst case scenarios don’t predict that the UK leaving the European Union will lead to the deaths of 1m people. Or to car bombs going off on a daily basis. Or the establishment of a terrorist organisation that specialises in beheading people. The Brexit negotiations, for heaven’s sake, are in the main, trade negotiations. No one is going to get blown up because of them.

British writers who compare Brexit to the Iraq War – whether it’s on outcomes — or on the basis of the government’s ‘lying to the voters’, are engaging in ludicrous hyperbole, and are doing the Remain cause a great disservice. Perhaps if they lived in Baghdad for a few months amid all the carnage that Bush and Blair unleashed, they might get a better sense of balance.

The devastation continues — Every car bomb in #Baghdad over 10 years… pic.twitter.com/dPSGG4NRRR

What makes Parris’s latest piece all the more shocking is that he was- to his credit- one of the few members of the ‘Establishment Pundits Club’ to oppose the Iraq War back in 2003. It’s worth noting though that he did so within the ‘acceptable’ parameters ie by maintaining that it was a mistake.

Parris’s assertion that the decision-making before the Iraq war was somehow more honourable because Blair ‘believed’ in his ‘adventure’ while Theresa May doesn’t really believe in Brexit falls at the very first hurdle.

Iraq was a war of choice which had no public endorsement. Brexit was approved by a referendum- and the government is merely implementing- or trying to implement the democratic decision taken by voters on 23rd June 2016.

It doesn’t matter if Theresa May and her Ministers believe in Brexit or think it a bad idea: their job is to carry it out. Iraq was totally different. There was no question of the war being in Britain’s ‘national interest’. Saddam Hussein may have been a dictator but he posed no threat to the UK, or to UK citizens; on the contrary his secular Baathist government was a regional bulwark against al-Qaeda, against whom we were told we were fighting a ‘war on terror’.

The Iraq War was a deceitful neocon enterprise, based on false claims about the country possessing WMDs- and a UK government that was genuinely concerned with the ‘national interest’ would have forcefully opposed it. It’s worth bearing in mind the findings of the Chilcot report which said that there was no ‘imminent threat’ from Saddam Hussein in 2003.

Moreover, Tony Blair was specifically warned by the Joint Intelligence Committee that invading Iraq would greatly increase the terror threat to the west.

Yet still he went ahead.

© REUTERS / Kevin Coombs
High Court Blocks Prosecution Bid Against Former British PM Blair Over Iraq War
If there were such a thing as ‘international justice’ then the politicians,  ‘think-tankers’ and lobbyists who were responsible for the illegal invasion, would now be behind bars serving life sentences and breaking rocks in their spare time. Instead, they’ve been rehabilitiated and are promoted once more by the elite media as ‘voices of reason’. As the old Latin saying goes: ‘dulce bellum inextremis’: war is sweet to those who have never experienced it.

Anti-Trump liberals in the US are expressing their admiration for George W. Bush, the man who set fire to the Middle East. In the UK, Inside the Tent commentators express regret- not for the 1m Iraqis who have lost their lives- or for the mainly working-class British soldiers killed and injured in the battlefields of Mesopotamia- but for the damage the war did to the reputation of their ‘progressive’ hero, Tony Blair.

Disgraceful thing to say. I for one will not forgive this heartless outburst.

My son fell at Basra, hang your head in shame Sir.

They hate it that the public are not as ‘Mad About the Boy’ as they are.

There’s irritation whenever anyone has the temerity to remind these people of the death of 1m Iraqis.

READ MORE: Iraq: From War on Terror to Civil War?

But Iraq will always define Blair’s Premiership- and so it should be.

Brexit may turn out to be a great success, or an abject failure. Or something in-between. No one really knows. If it didn’t work out, after a reasonable time period, Britain could always apply to rejoin the EU.

But for the victims of the Tony Blair’s ‘adventure’ in Iraq, there is no second chance. That’s worth remembering the next time you see someone, writing 3,000 miles away from the car-bombs in Baghdad, making such an objectionable comparison.