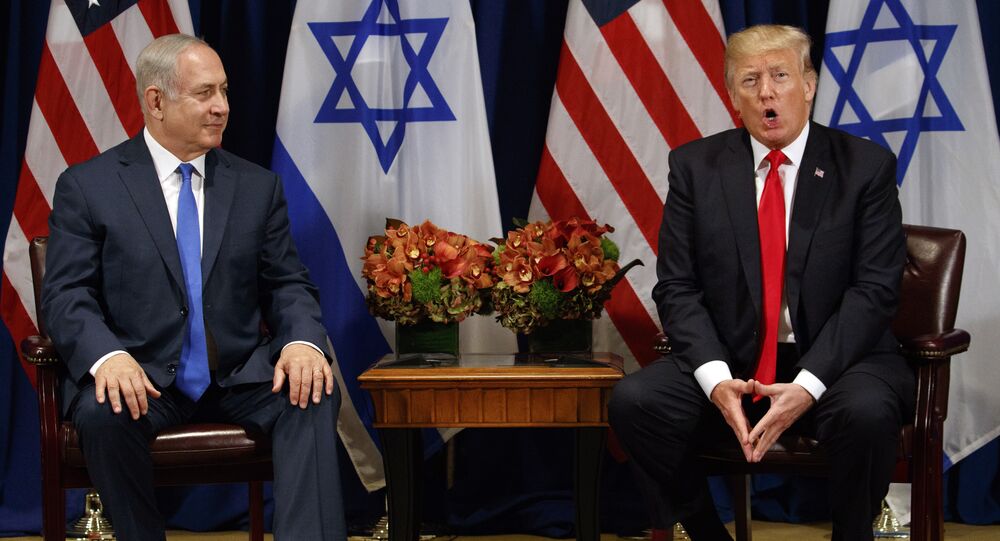 "Nothing to see here. Please disperse!" That classic scene from the film The Naked Gun - when cop Frank Drebin tells the assembled crowd there's not really much going on - while behind him a fireworks factory is exploding and people are fleeing in all directions - springs readily to mind when we consider recent developments in American politics.

We were told that the indictment of former National Security Advisor General Michael Flynn — who admitted he had lied about a phone call he made to the Russian Ambassador during the so-called 'transition period' — would prove conclusively that Donald Trump was in bed with the Russkies. 'Russiagate' would be proved once and for all.

But — embarrassingly for the US's Russophobic political and media establishment the collusion with a foreign power that the case has exposed is not collusion with Russia — but with Israel.

The biggest story of the year — is suddenly not very big any more. It's been quite hilarious to see pundits who were getting terribly excited about the 'smoking gun' that Flynn's indictment would reveal lose their interest in the story as it took a dramatic 'wrong' turn — and implicated the 'wrong' country. Embarrassingly, it's a country that almost the entire US media and political elite are strong supporters of.

Flynn's phone call was revelatory alright but not in the ways the Russophobes had hoped for.

The General first of all urged the Russian Ambassador not to retaliate for the new sanctions that the outgoing Obama administration had imposed on Russia. In the words of Max Blumenthal — "Flynn was caught trying to influence Russia, not the other way around." The Russians did not escalate the situation.

Flynn then proposed greater US-Russian co-operation in fighting ISIS and al-Qaeda in Syria. Again, what was so scandalous about that?

But what was certainly controversial: the equivalent of Naked Gun's exploding firework factory, was Flynn's lobbying of Russia to use its veto to block the passing of a UNSC Resolution condemning the growth of Israel's settlements.

Flynn made his request about the UN vote at the behest of Trump's son-in-law and top advisor Jared Kushner, who has strong links to Israel — links which investigative journalist Max Blumenthal documents here.

Russiagate has morphed into Israelgate. The New York Times reported on 1st December:

"Mr. Mueller's investigators have learned through witnesses and documents that Prime Minister Benjamin Netanyahu of Israel asked the Trump transition team to lobby other countries to help Israel, according to two people briefed on the inquiry. Investigators have learned that Mr. Flynn and Mr. Kushner took the lead in those efforts….Mr. Mueller's team has emails that show Mr. Flynn saying he would work to kill the vote, the people briefed on the matter said."

Furthermore, the Guardian reported, how on 23rd December 2016, the day after Flynn talked to the Russian Ambassador, an unnamed Israeli official had told CNN that his country did 'reach out' to President-elect Trump about the vote.

Trump did indeed speak out to condemn the UN vote.

The revelations should have made front page across the world. But guess what — they haven't. We can only imagine the furor if the 'reaching out' country had been Russia — and if Flynn had called other countries to kill a UN vote on Russia's behalf.

Given how accommodating he's been towards Israel — even before officially taking office — some are now asking the question: Did Israel work to get Donald Trump elected?

The truth is that in the 2016 Presidential election — as in previous elections — it couldn't really lose because of the strength of the pro-Israel lobby in both Republican and Democratic camps.

The New York Times tells us that Trump's announcement that the US would move its embassy to Jerusalem "was extremely popular with evangelicals and pro-Israel backers, including the casino magnate Sheldon Adelson, who donated $25 million to a political action committee supporting Mr. Trump during the presidential campaign." The paper also tells us that Adelson "expressed anger when Mr Trump signed the waiver to keep the embassy in Tel Aviv."

But if you think it's all a right-wing Republican plot, then consider too that Democrat Chuck Schumer, Senate minority leader, said he advised the President to declare Jerusalem the 'undivided' capital of Israel.

Moreover, Trump's beaten opponent in last year's Presidential race, Hillary Clinton, had been calling for Jerusalem to be recognized as Israel's undivided capital since as far back as 1999.

Then she had declared: "If I am chosen by New Yorkers to be their senator, or in whatever position I find myself in the years to come, you can be sure that I will be an active, committed advocate for a strong and secure Israel, able to live in peace with its neighbors, with the United States Embassy located in its capital, Jerusalem."

In fact, there is a strong argument for her saying that. Hillary — because of her more hawkish line on 'regime change' in Syria — would have been a 'better' President for Israel supporters than Trump, which could explain why so many leading neocons and committed Zionists supported her and opposed the Donald.

© CC0
Russian Trolls Are Taking Over the World! Or Perhaps Not...

Trump's  support of Israel is in many ways more honest than the same level of support it gets from Democrats who try to sugar-coat the pill with progressive platitudes about the 'rights of the Palestinians' and 'two' state solutions,' which don't mean anything.

Because of the strength of the pro-Israel lobby the US was never really an honest 'peace-broker' in the Middle East — as some, including Labour's Shadow Foreign Secretary Emily Thornberry, have claimed this week. The US has almost always favored the Israeli side.

Now, because of Trump and Kushner that support is more open for all to see.

'Israelgate' shouldn't really surprise us because attempts by the pro-Israel-lobby to influence US foreign policy in the country's favour have been going on for years. It happened before Trump and it'll happen after him.

And that's what makes the current McCarthyite hysteria about unproven 'Russian interference' in American politics so hypocritical — especially when you bear in mind that its often pro-Israel commentators of the so-called 'liberal-left' who are at the forefront of the relentless anti-Russia campaign.

Russian Trolls Are Taking Over the World! Or Perhaps Not...