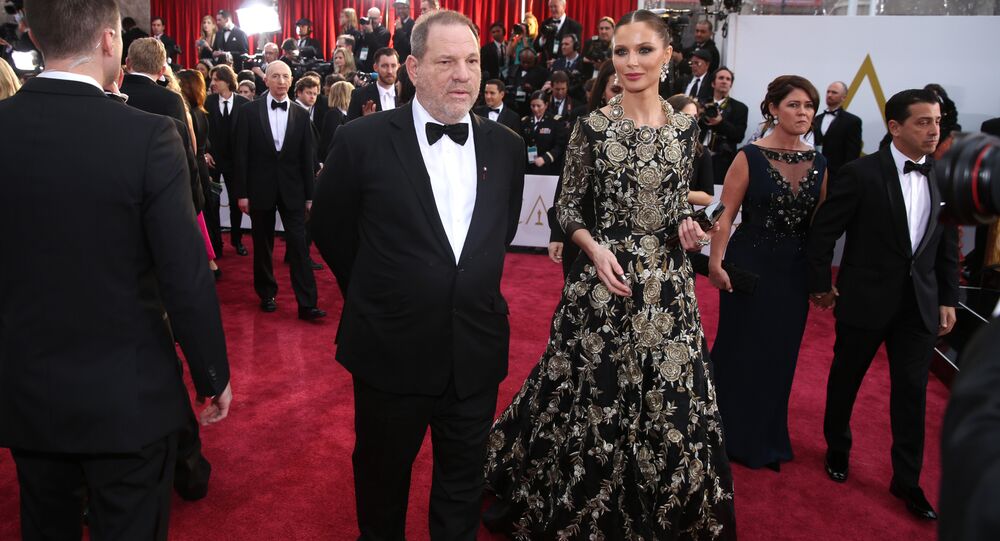 The only surprise concerning the exposure of Hollywood movie mogul Harvey Weinstein as a serial abuser of women is that anybody could possibly be surprised. We are, after all, talking about a town, industry and culture which not only produces monsters it goes out of its way to cultivate and worship them.

Sympathy for Mr. Weinstein is notably in exceedingly short supply among family members, former friends, associates, and fellow studio execs in Hollywood — not to mention high profile political figures within the US liberal political community whose "loyalty" and friendship he'd cultivated over the years with the judicious use of campaign donations. All of them have scrambled for cover, treating a man they once revered as a veritable sun king as something akin to radioactive waste overnight.

It is an astounding and vertiginous fall from grace to befall a man whom for decades was so synonymous with Hollywood and the movie industry he was considered infallible, one of the very few movie executives with the ability to make and ruin careers with a single phone call.

But lost in what has now become a feeding frenzy of condemnation — to the point where it is hard to escape the whiff of opportunism on the part of those who've been jumping on a bandwagon that has picked up warp speed during the course of the controversy — is that Weinstein's contemptible abuse of women, far from the exception or an aberration has long been the norm in Tinsel Town.

"Hollywood is a place where they'll pay you a thousand dollars for a kiss and fifty cents for your soul," Marilyn Monroe famously averred — and who can argue with a woman whose star once shone brighter than any other in that rarefied world, only for it to fall under the crushing weight of brutal exploitation, feeding inner demons that ultimately destroyed her?

In my 2013 book, Dreams That Die, I recount my own experience of living and working in Hollywood between 2000 and 2005. I arrived determined to establish a career as a screenwriter and would up spending over three years sleeping on the mattress on the floor of a tiny studio apartment just off Hollywood Boulevard, scraping a living as a nightclub doorman, extra in TV shows and movies, including on one movie where I was Ben Affleck's double/stand in, working and hoping to catch a break in my own chosen career.

It's the same existence lived by countless thousands in LA, young men and women who arrive from all over the US and beyond determined to "make it" and see their dream come true. The toll it takes — the loss of dignity that comes with subjecting yourself to abuse from those higher up the food chain — is impossible to properly quantify, but take a toll it most certainly does unless you are able to stop yourself drowning in the culture of vomit which is the reality that belies the image of fame, glamor, and untrammelled wealth commonly associated with this part of the world and industry.

If I had been under the naive belief that I could write movies that would make a difference it was soon knocked out of me by the manager I had. From his wrist dangled a Rolex bigger than the jalopy I used to roll up outside his office in every week to be told that my latest script was a "piece of shit" and that I needed to start writing movies that weren't so "anti-American."

Working on TV shows and movies as an extra you are provided with an understanding of how a caste system works. In my time I saw extras in tears as they were being escorted off the set of the sitcom Friends by security guards for turning up five minutes late after taking three buses to get there, begging to be allowed to stay because they needed the paltry fifty bucks (the daily rate back then for a non-union extra) to pay the rent. I saw extras so poor they stole food from the catering truck to take home, and I witnessed old men and women being yelled at by production assistants in their early twenties for missing their marks during a scene.

And, yes, the legions of young women were ripe for other kinds of abuse too.

This is not to assert that there are no decent people or people in positions of influence in Hollywood with integrity. There are. But they are outnumbered in my experience by the other kind.

Harvey Weinstein is the tip of a very large iceberg when it comes to abuse in the movie business. He is the rotten product of a rotten culture dominated by sociopaths, people who are given unlicensed power over other human beings — most of them desperate to forge careers in this most brutal and unforgiving of businesses, and thus ripe for spiritual, emotional, and psychological slaughter.

"Most of the successful people in Hollywood are failures as human beings."