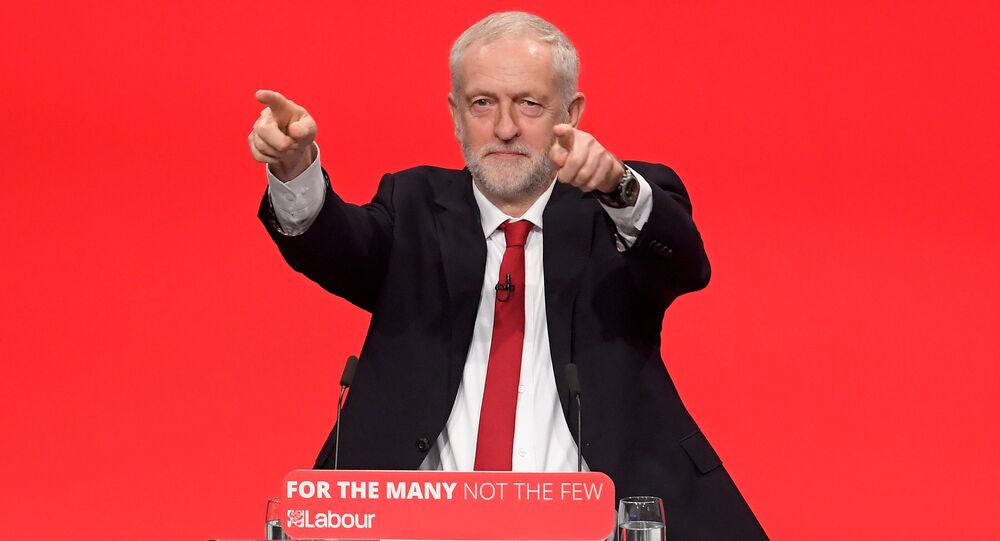 Jeremy Corbyn's inspirational speech at this week's Labour Party conference, in which he pledged to develop "a new model of economic management to replace the failed dogmas of neo-liberalism," was arguably the best address by a Labour leader to the party faithful since Harold Wilson's in 1975.

Back then, the four-times general election winner warned delegates about the dangers of Thatcherism.

Sadly, Wilson's predictions that the ever-narrowing gap between rich and poor would be reversed, came true.

Jeremy Corbyn's #Lab17 speech was the best from a Labour leader at conference since the days of Harold Wilson. Please RT if you agree

On Wednesday, September 27, Corbyn made it clear that if he does become Prime Minister, the era of Thatcherism — and its faux-progressive variant, Blairism, will be at an end.

The financial crash of 2008, brought about by the greed of the banksters and the reckless deregulation of the financial services sector ought to have seen neoliberalism consigned to the dustbin of history. Instead it led only to an even more extreme version of crony capitalism — one in which the burden of paying for the bankers' bailout was placed on the shoulders of ordinary people. The result — as Corbyn stated in Brighton — has been the "longest fall in people's pay since records began."

In 2016, figures showed that UK wages had dropped around 10% since the financial crisis — the worst in anywhere in Europe except Greece

At the same time, it was reported that the richest 1% now owned 24% of the nation's entire wealth. You don't have to be a 21st century Che Guevara or Rosa Luxemburg to acknowledge that the situation was grossly unfair and that radical change was needed.

Yet, incredibly, until Corbyn came along — to take the Labour leadership as a 500-1 shot in 2015 — there had been no serious challenge to the ruling neoliberal orthodoxies from the leading parties. Ed Miliband, the Labour leader from 2010-15, did edge away from Blairism, but it was too cautious a move to persuade enough voters to return to the Labour fold. The party could have won the 2015 election with a bolder program, but Labour's share of the vote only went up 1.4% from its poor showing in 2010 under Gordon Brown.

Contrast this with what's happened under Corbyn, the man who Establishment pundits assured us was leading Labour off a cliff. Labour party membership has surged from just over 200,000 at the time of the 2015 general election, to over 550,000 today. In this year's general election, Labour received 40% of the vote, recording its biggest increase in vote share since 1945.

Because it's ignored the advice of the know-it-all "moderates" — embedded in the neocon media — and adopted populist anti-neoliberal policies, its bucked the trend we've seen across the continent. Labour's fortunes are in stark contrast with those of the German SPD, who only this week slumped to their lowest share of the vote since World War Two.

ln his conference speech, Corbyn quite correctly stated that Labour was now the political mainstream and occupied the genuine center-ground of public opinion — a point I made in a recent Sputnik column.

While those hostile to Corbyn call Labour under his leadership "hard-left" or "revolutionary," the truth is that the party is simply putting forward sensible, practical solutions to the countries biggest problems — and advocating policies that were accepted by all the main parties as being common sense in the post-war era.

Jeremy Corbyn has just so grown into his role over the last 2 years. Great speech!

Take public ownership. Corbyn's support for this is presented by his critics as evidence that he is a dangerous, wild-eyed extremist hell-bent on turning Britain into North Korea. In fact, public ownership of the utilities was the norm in Britain until Thatcherism and was supported by post-war Tories too. The same goes for rent controls, which were introduced in the First World War and only abolished in full in 1988.

Corbyn's foreign policy also marks a break with the neocon extremism of the past thirty years. In his Thursday speech, the former Chair of Stop the War declared, "We should stand firm for peaceful solutions to international crises."

He quite correctly linked the increase in terrorism to neocon/liberal interventionist foreign policies.

"We also know that terrorism is thriving in a world our governments have helped to shape, with its failed states, military interventions and occupations where millions are forced to flee conflict or hunger. We have to do better and swap the knee-jerk response of another bombing campaign for long-term help to solve conflicts rather than fuel them," he told conference.

It's fair to say that Corbyn's speech brought the house down.

Labour activists present left the conference on a real high and with a renewed sense of purpose. I certainly can't recall any address by a Labour leader that's been as moving, or as thought-provoking, for over forty years. But of course not everyone is happy. Obviously Conservatives are going to attack Corbyn — that's their job. Corbyn's bitterest enemies though are the faux-left who are angry that Labour has ditched Blairism and gained votes for doing so.

These pro-war "progressives" initially said they were against Corbyn because he was leading the party to electoral oblivion.

Now they accuse him of leading a "cult."

It's clear that most of them would rather the Tories win than have a Labour party come to power on a program offering the prospect of real change.

Corbyn — make no mistake — is on a roll, but ironically it's his popularity which could delay his entry to Downing Street. Opinion polls since the election have shown a consistent lead for Labour as the party has built on the support they received in June.

The Conservatives know that to go to the country now would be suicidal. And even if the polls turned round and showed the Tories consistently ahead — could they really risk an election knowing what happened to them in June — when they were around 20 points ahead when the election was called?

That said, parliamentary maths means that it's going to be hard to see the Tories lasting the full five years. And if Theresa May is replaced by Boris Johnson, Jacob Rees-Mogg, Ruth Davidson or anyone else, the pressures to seek democratic legitimacy via a general election will be great.

Jeremy Corbyn may have to wait a while before he gets the keys to Number Ten, but in one sense, he's there already. Even without being PM he's already had a major impact on government policy. As he said in Brighton:

"Conference, your efforts in the election campaign stopped the Tories in their tracks. The election result has already delivered one Tory U-turn after another over some of their most damaging policies. The cruel dementia tax was scrapped within three days of being announced. Plans to bring back grammar schools have been ditched. The threat to the pensions' triple lock abandoned. Withdrawal of Winter Fuel payments dumped. The pledge to bring back fox hunting dropped. And their plan to end free school meals in primary schools has been binned… It is Labour that is now setting the agenda and winning the arguments for a new common sense about the direction our country should take."

Before Corbyn made his speech I was invited by the BBC to give my assessment of Labour under his leadership. I tweeted:

Is @jeremycorbyn a Prime Minister in waiting? I'll be on @BBCTees shortly to discuss…#Labour17

To which I received the reply from Roy Pearce:

He is the prime minister now.

Yesterday, Corbyn didn't sound like a Prime Minister in waiting. He sounded like the man who's already there.