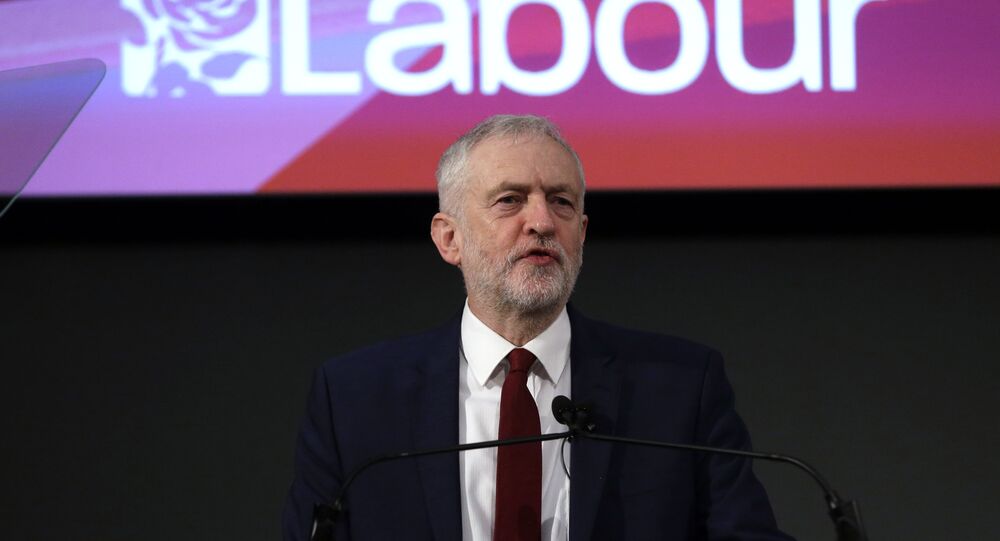 Britain's self-styled political "moderates" are getting very excited and it's not just because the latest bid to prosecute Tony Blair for war crimes has been blocked by the High Court.

The talk this summer in smart metropolitan circles is of a new "center" party being formed that would fight to keep Britain in the EU and "save the country" from the supposed lurch to the extremes of both the "hard-Brexiting" Tories and "hard-left" Labour.

Last week it was revealed that James Chapman, a former spin doctor for George Osborne and David Davis, and self-described "recovering Daily Mail political editor" was planning to launch a new "centrist" party called the "Democrats."

Just a load of "Ed Balls" and something to fill the papers with in the dead news days of August? "Chappers" says that prominent members of both main parties have been in touch — and the "Democrats" have announced a march in London on 9th September.

RT to support and inspire others to attend. See @jameschappers for more details.

We've also read countless reports on how disgruntled Blairites were planning to back a new "Party of All the Moderates." Back on June 23, Phil Collins (that's Blair's former speechwriter and not the pop star), proclaimed "Now is the moment to launch a new party," and drew parallels with the launch of the SDP back in 1981.

Earlier Collins argued "we need not just a Labour split, but a realignment of the center."  In the words of the other Phil Collins, there's certainly something in the air tonight — and I'm not just referring to the strong smell of fertilizer which emanates from the fields at this time of year.

A new 'Centre Party'? The Establishment's latest ruse to try and stop a Jeremy Corbyn-led Labour Party coming to power…..

The arguments for a new center party are based on a belief that there's a gap in the market. But is it really true?

If by 'center' we mean where majority mainstream public opinion is — as opposed to where elite opinion is — then surely we've already got a "center" party. It's called Labour.

Corbyn hasn't taken the party to a political Outer Mongolia, as Establishment commentators tell us on an almost daily basis, but actually moved it towards the real center ground. The center ground  of majority public opinion that is, not the phoney pro-war, pro-neoliberal center ground of the "Inside the Bastille" media, financial and political elites.

Take the re-nationalization of Britain's rip-off railways, easily the most expensive in Europe. This is invariably branded as a "a hard-left return to the 70s" by "centrist" pundits, but in fact it's a very popular policy endorsed by over 60% of the electorate.

© CC0 / Pixabay
Let's Get This Party Started! New UK 'Democrats' Suggested by Anti-Brexiteers
Labour's pledge to renationalize water in England has even more public backing — a Sunday Express poll in 2012 put support for it at 71%.

Listen to the punditocracy and you'd think only "Stalinists" want these populist economic policies, in fact they're supported by most of the country — including people living in Tory shires.

Labour's less hawkish line on foreign policy under Corbyn also chimes with an electoral sick and tired of British involvement in Middle East wars and US-sponsored "regime change" operations. "Liberal interventionism" may still be popular in elite circles, and among the mutually-adoring neocon Twitterati, but again, it's not a vote-winner with ordinary folk, who care more about heating bills than toppling Assad in Syria.

It's worth noting that when Labour was still "New Labour" and occupying the phoney elite center ground in 2010, it only obtained 29% of the vote. But since it's moved towards the genuine center ground, it has reaped the benefit — polling 40% in June, its biggest increase in the share of the vote since 1945.

Labour's poll surge, as I wrote here, had Establishment pundits — who were predicting electoral Armageddon for the party — in a right-old flap.

These "experts" couldn't believe that the electorate would vote for a party whose policies they — but not the general public — regarded as "loony-left." But despite the rude awakening they got on June 8, most "mainstream" pundits still push the line that Labour, under Corbyn, is too extreme. Even Labour's official support for Brexit is taken as evidence of the party ditching "moderation." Again though, Labour's stance, namely to respect the referendum vote of June 23, 2016, while campaigning for the best possible Brexit for ordinary working people, is a genuine center ground position.

With 48% voting to stay in the EU, it would clearly be wrong to say that the concerns of Remainers don't matter and shouldn't be listened to. At the same time it would even more unfair to say to the 52% who voted "Out" that their votes were going to be ignored — or that a second referendum was needed.

Brexit is a national emergency. Parliament must be recalled so we can avoid further calamity #TheDemocrats #WeMarchOn

Even if you take the line that Brexit will be the biggest disaster for Britain since the Black Death arrived in 1348, and that consequently we should be throwing a jumbo-sized spanner in the works, it's still hard to see the pressing need for a brand new "center" party to oppose it. The Liberal Democrats, after all, "passionately believe" Britain is better off in Europe. They have pledged to give the British people a "final say" on whether we accept the government's Brexit deal or stay in Europe. For passionate Europhiles, why bother to start a new party, when you can put on a yellow tie and link arms with The Cable Guy and his crew?

Brexit is happening end of story. That's what the British people voted for.

All in all, its hard not to see the calls for a new "center" party as a desperate rear-guard action from those unhappy with the dramatic political upheavals of the last few years, which have seen Labour ditch Blairism, the Bullingdon Boys Cameron and Osborne lose power, the British public vote to end our 40-odd year membership of the EU, and the exciting rise of grassroots "Power to the People!" organizations like Momentum.

James Chapman, (whose commitment to the cause you can't help admiring), tweets: "We lecture other countries but truth is our political and media establishment is rotten," but the "Democrats," by putting their faith in "Parliamentary democracy" and banning referendums would essentially be endorsing Establishment-friendly, anti-populist, Westminster-bubble old-style politics. That's even allowing for their support for proportional representation.

But you’re asking the same & current members to join you? see the problem?

While promoting themselves as progressive agents of change, the new "centrists" are actually quite reactionary.

Centrism has only one ideological principle.
To replace Socialism as the tame alternative to Right Wing politics.
That's what it's for.

Their aim seems to be to turn the clock back to the sort of politics we had somewhere around 2006.  But the real center ground now is elsewhere, and the bad news for those seeking a political realignment is that a man with a beard, wearing a white short-sleeved shirt, emerald green shorts, black socks and a rucksack slung over his shoulder, has already pitched his tent on it.

Will June (or July) Bring the End of May?