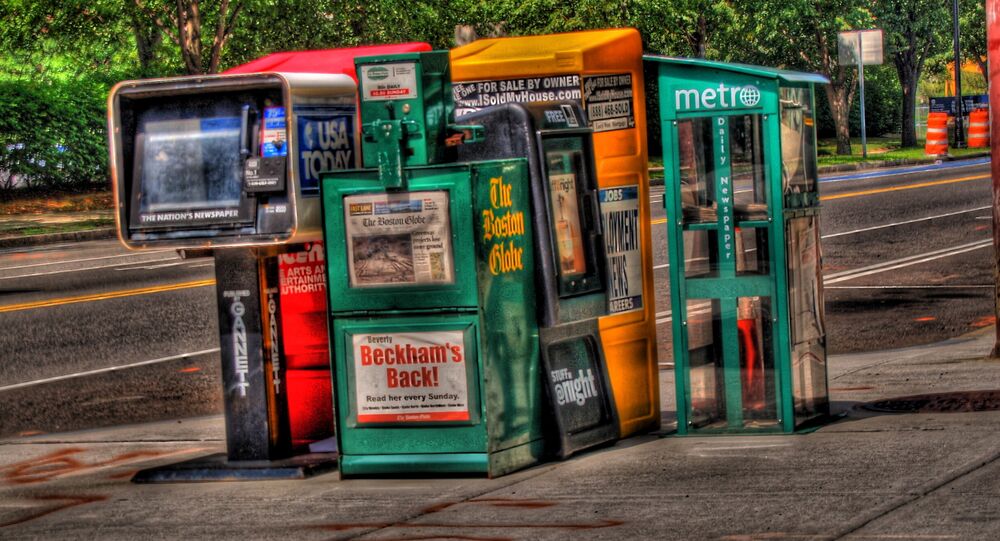 Presstitutes at Their Work

The Western media has only two tools. One is the outrageous lie. This overused tool no longer works, except on dumbshit Americans.

© Sputnik / Vladimir Pesnya
Germans No Longer Believe Anti-Russian Propaganda - German Publicist
The pinpoint accuracy of the Russian cruise missiles and air attacks has the Pentagon shaking in its boots. But according to the Western presstitutes the Russian missiles fell out of the sky over Iran and never made it to their ISIL targets.

According to the presstitute reports, the Russia air attacks have only killed civilians and blew up a hospital.

The presstitutes fool only themselves and dumbshit Americans.

The other tool used by presstitutes is to discuss a problem with no reference to its causes. Yesterday I heard a long discussion on NPR, a corporate and Israeli owned propaganda organ, about the migrant problem in Europe. Yes, migrants, not refugees.

These migrants have appeared out of nowhere. They have decided to seek a better life in Europe, where capitalism, which provides jobs, freedom, democracy, and women’s rights, guarantees a fulfilling life. Only the West provides a fulfilling life, because it doesn’t yet bomb itself.

© Flickr / Sergio Alvarez
Reporters Across Europe Blasted Over Biased Journalism
The hords overrunning Europe just suddenly decided to go there. It has nothing to do with Washington’s 14 years of destruction of seven countries, enabled by the dumbship Europeans themselves, who provided cover for the war crimes under such monikers as the “coalition of the willing,” a “NATO operation,” “bringing freedom and democracy.”

From the Western presstitute media you would never know that the millions fleeing into Europe are fleeing American and European bombs that have indiscriminately slaughtered and dislocated millions of Muslim peoples.

© Flickr / Ville Miettinen
Western Democracy Is An Endangered Species On Its Way To Extinction
Not even the tiny remnant of conservative magazines, the ones that the neocon nazis have not taken over or exterminated, can find the courage to connect the refugees with US policy in the Middle East.

For example, Srdja Trifkovic writing in the October issue of Chronicles: A Magazine of American Culture, sees the refugees as “the third Muslim invasion of Europe.”  For Trifkovic, the refugees are invaders who will bring about the collapse of the remnant of Western Christian Civilization.

Trifkovic never mentions that the Europeans brought the millions of Muslim refugees upon themselves, because their corrupt political bosses are Washington’s well-paid vassals and enabled Washington’s wars for hegemony that displaced millions of Muslims. For Trifkovic and every other conservative, only Muslims can do wrong. As Trifkovic understands it, the wrong that the West does is not defending itself against Muslims.

Trifkovic believes that Europe will soon live under Sharia law. He wonders if America will “have the wherewithal to carry the torch.”

© AP Photo / Richard Drew
Where is Neo When We Need Him
A majority of Americans live in a fake world created by propaganda. They are disconnected from reality. I have in front of me a local North Georgia newspaper dated October that reports that “a Partiot Day Memorlal Service was held at the Dawson County Fire Headquarters on September 11 to remember the terrorist attacks that shook America 14 years ago.” Various local dignitaries called on the attendees to remember “all of those who have died not only on that day, but since that day in the fight to keep America free.”

The dignitaries did not say how murdering and dislocating millons of Muslims in seven countries keeps us free. No doubt, the quesion has never occurred to them. America runs on rote plattitudes.

The presidents of Russia and China watch with amazement the immoral stupidity that has become America’s defining characteristic. At some point the Russians and Chinese will realize that no matter how patient they are, the West is lost and cannot be redeemed.

When the West collapses from its own evil, peace will return to the world.