Coming to the rescue amid a partial government shutdown, US President Donald Trump took to Twitter Tuesday to tweet (and soon delete) that he supplied recent NCAA Football Champions, the Clemson Tigers, with over “1000 hamberders” to celebrate their title. 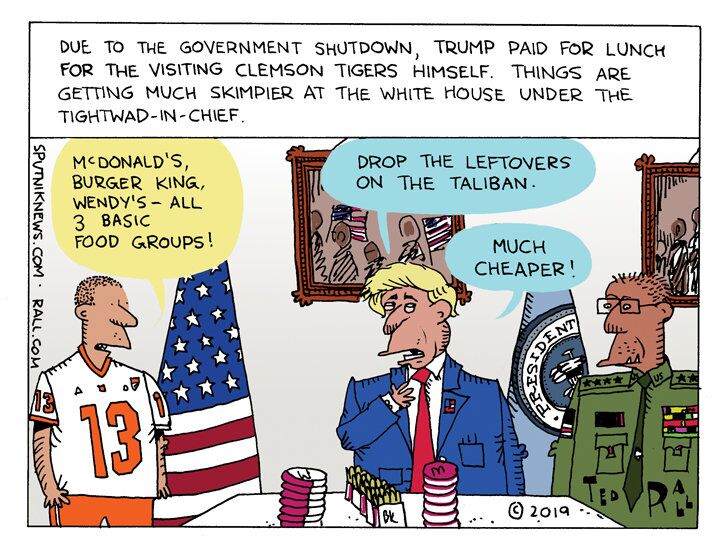 With not a single food warmer in sight, The White House tweeted a trio of photos Monday showing off a fast-food feast purchased directly by the US commander-in-chief.

Though some players, such as Matt Bockhorst, rolled with the gut punches in and outside of the White House, the same could not be said for all athletes present. One player in particular can be overheard remarking "I thought it was a joke," as he selects a (probably) cold cheeseburger from the artery-clogging shmorgishborg.

:18 in on @DarrenMHaynes video a Clemson player says "I thought it was a joke" while eating the White House fast food buffet pic.twitter.com/4VhweRd5e3

Like children accepting hard candy from their grandma's purse filled with used handkerchiefs, the players appeared to begrudgingly agree to ingest the mediocre meal.

Coming to the rescue, Quavo, one-third of rap group Migos, offered to "show POTUS how champs are supposed to be treated" by giving the Clemson football players VIP access to his record label's headquarters.