Major US broadcasters will forgo regular programming Tuesday night to air US President Donald Trump’s Oval Office address concerning the potential next steps to be taken by Washington concerning the proposed $5 billion wall on the US’ southern border. 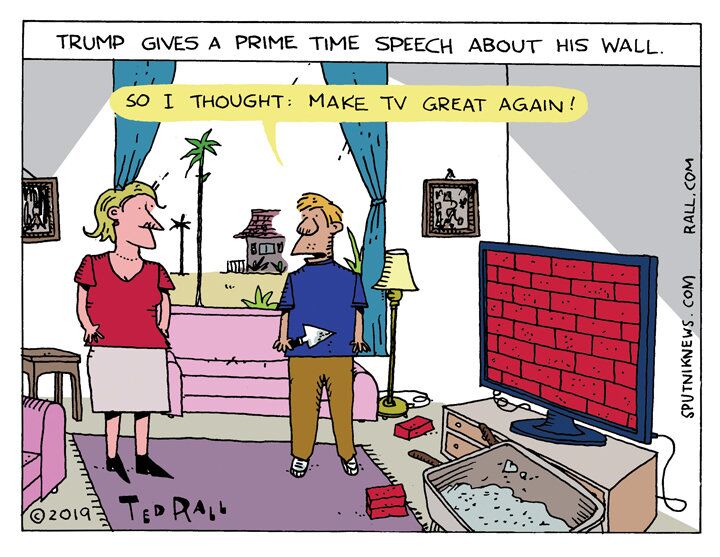 Speaking to reporters at the White House Monday, Trump claimed he "can relate" to the estimated 800,000 federal employees currently working without knowledge of when their next paycheck will come in, due to the partial government shutdown. Seconds later, the US president would go on to claim many of those federal workers completely support the push for a border wall.

While 45's Oval Office speech is set for Tuesday night, the past couple days have not been too promising for the Trump administration when it comes media presence.

Following pushback from Trump's assertion that former US presidents confided in him that they should have previously constructed a border wall, Vice President Mike Pence sat down with NBC's Hallie Jackson. When asked about the president's remarks (which were denied by all relevant parties' representatives), Pence seemingly equated Trump's claim of private presidential conversations with "clips of previous presidents talking about the importance of border security."

Speaking of border security, White House Press Secretary Sarah Sanders also gave a cringeworthy performance in an interview with Fox News' Chris Wallace on Sunday. After incorrectly stating the country's southern border was the "most vulnerable" point for terrorist entry, Sanders was immediately fact-checked by Wallace, who had "studied up" and provided contrary evidence, courtesy of the US Department of State.

With showings such as these, it is anyone's guess as to which direction the US president will go Tuesday night. In any case, 45's remarks will be more difficult to tune out than usual, considering the stakes and media coverage.