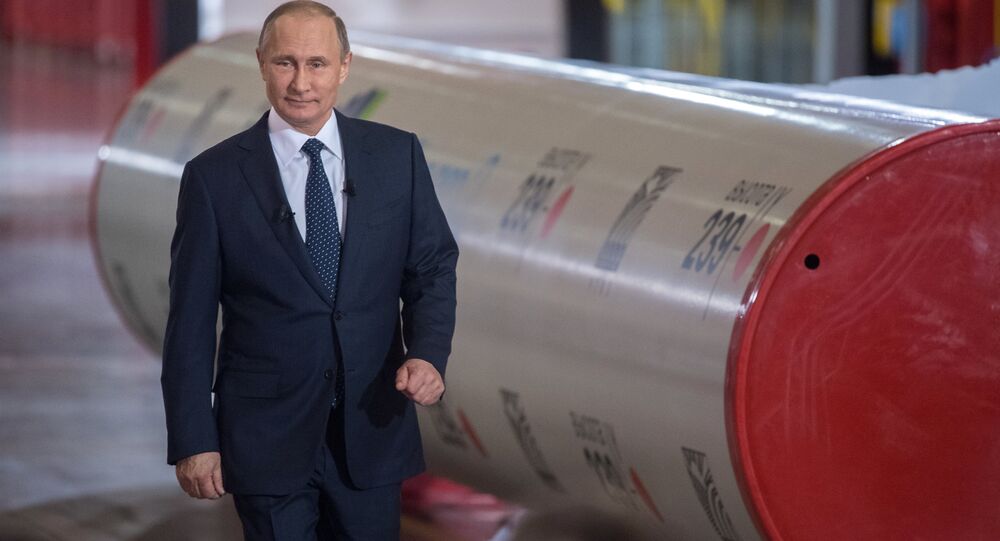 Last week, a State Department spokesperson indicated that Washington was continuing its review of potential “sanctionable activity” by companies involved in the construction of the Russian-Western European energy infrastructure megaproject. President Biden has called Nord Stream 2 a “bad deal for Europe”.

A 40-member-strong group of Republican senators has sent President Joe Biden a letter asking him to slap additional sanctions on Nord Stream 2, saying the project violates US laws and warning that time was running out to stop construction.

“With construction on the project currently taking place, there is publicly available information on vessels and companies engaging in sanctionable activities. The failure of the Administration to identify and impose new sanctions signals its willingness to allow President Putin to gain a stranglehold over Europe’s gas supplies and increase [Russia’s] geopolitical leverage,” the letter says.

The lawmakers point out that the so-called “Protecting Europe’s Energy Security Act” already mandates for sanctions to be imposed, and warn that “time is of the essence” to halt construction activities. “The Administration cannot turn a blind eye to those who violate our laws,” the letter urges.

Lawmakers also express disappointment with the report submitted by the White House last month identifying the Russian-flagged pipelayer Fortuna and its owner as the only violator of US sanctions, pointing out that the vessel and the company that owns it had already been slapped with sanctions by the Trump administration, with little apparent impact on its activities building the pipeline.

“It is now time to act. It is critical that the United States enforce our laws and hold those entities accountable for assisting Russia in building this dangerous pipeline,” the letter concludes.

The appeal’s signatories included most of the bigwig GOP members of the Senate, including Tom Cotton, Marco Rubio, Lindsey Graham, Susan Collins, and Mitt Romney.

© REUTERS / MAXIM SHEMETOV
The logo of the Nord Stream 2 gas pipeline project is seen on a pipe at the Chelyabinsk pipe rolling plant in Chelyabinsk, Russia, February 26, 2020.

The United States has already slapped Nord Stream 2 with two rounds of sanctions, with the so-called Protecting Europe’s Energy Security Act rolled into the National Defence Authorization Act of 2019, and more restrictions passed on 1 January 2021.

The first round of sanctions prompted AllSeas, a Switzerland-based construction contractor, to pull out of the project, citing the threat of “crushing and potentially fatal” sanctions against it. This led to a freeze in construction with less than 150 km of the 1,230 km project left to complete as Russia scrambled ships to the Baltic Sea to prepare to finish work.

Construction was restarted late last year and resumed after a short break in February, with pipelayers presently working on a stretch of the pipeline in Denmark’s exclusive economic zone, and US sanctions against Russian vessels appear to have had little impact thus far. The new restrictions have prompted several insurance, engineering and certification firms to pull out of the project, however.

The 9.5 billion euro project is being financed by Russia’s Gazprom, Germany’s Uniper and Wintershall, France’s Engie, Austria’s OMV and the Dutch-UK concern Royal Dutch Shell. Once completed, it will be able to pump up to an additional 55 billion cubic meters of gas per year from Russia to Germany via the bottom of the Baltic Sea, doubling the capacity of the existing Nord Stream network.

© Sputnik / Nord Stream 2
Germans Must Make Gov't Pursue Nord Stream Project to Ensure Economic Security, Lawmaker Says
Germany, Nord Stream 2’s main European benefactor, has repeatedly rejected the prospect of new extraterritorial sanctions against the project, calling US efforts in this direction an “encroachment on European sovereignty,” and warning that it is closely coordinating the issue with its European Union partners.

In January, former Chancellor and Nord Stream AG board chairman Gerhard Schroeder told German media that Berlin cannot allow Washington to dictate its energy policy, or allow it to threaten a project which he said would ensure German energy security for “generations” to come.

“If American policy is going to determine how we carry out our energy policy, where will this lead? The US cannot dictate to us – without having its own interests in mind – on what gas we use. Of course, they want to sell their own fracking gas to Germany. However, it is not environmentally friendly, is expensive and of poorer quality than pipeline gas,” he said.