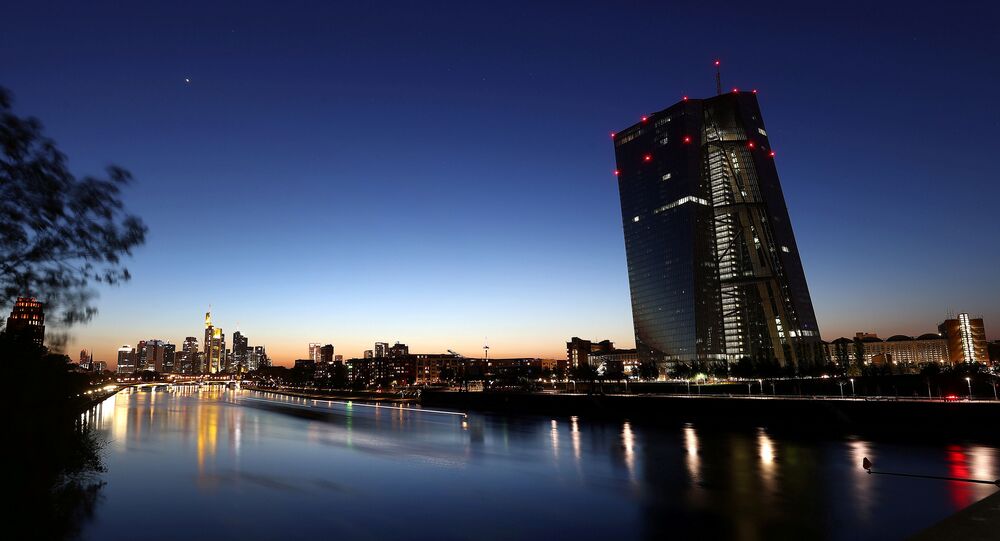 BRUSSELS (Sputnik), Luc Rivet - Germany's highest court, the Constitutional Court in Karlsruhe, accused in a landmark ruling on Tuesday the European Central Bank (ECB) of massively supporting some countries in the eurozone more than others by more massive buying of bonds emitted by these countries within the so-called Quantitative easing program.

This massive bond-buying is a stimulus package for EU member states' economies — the so-called Quantitative easing or QE measure. The non-standard monetary policy was first used from 2015 to 2018 by former ECB head Mario Draghi to support economic growth across the euro area and envisaged the purchase of government bonds and other securities worth about 2.6 trillion euros ($2.8 trillion). This program was reactivated last November amid pressure on the eurozone over Brexit and trade conflicts.

According to the German Constitutional Court, the ECB does not respect its fundamental charter, which stipulates that it can only purchase bonds proportionately to the size of each member state’s economy. In particular, the top court's ruling does not concern Greece or Cyprus, as near monetary collapse in the countries put them in a specific category, but Italy, Spain, France and some other countries.

So far, the ECB program has been helping to prevent market turmoil in indebted Italy, which has been hard hit by the coronavirus outbreak. However, doubts expressed by the German court may complicate the ECB’s efforts to support euro.

"Quantitative easing" is an unprecedented monetary policy used by the ECB to kick start the lagging economy in the 15 countries of the eurozone. The scheme was also used by the US Federal Reserve, the Bank of England and the Bank of Japan since the 2000s. In particular, under the scheme, central banks purchase longer-term securities from the open market in a bid to add new money to the economy and decrease interest rates.

Until 2015, the eurozone had never used such a tool, as the Maastricht Treaty expressly prohibited monetary financing of member states. It was one of the conditions set by Germany to abandon Deutsche mark in favour of the euro. Quantitative easing is only acceptable, in the eyes of European justice, if it is an exceptional instrument enabling the ECB to reach its inflation target of 2 percent in the medium term or to save the economy.

The German top court has long investigated the ECB’s "whatever it takes" approach to support the euro, so it is not related to the current coronavirus aid issue and the so-called coronabonds aimed to revive economies of European countries amid the pandemic. In particular, the German court regrets the lack of transparency of the ECB purchases of state bonds and said that they were not proportionate to the size of the country’s economy in the EU and eurozone. As a result, it gave the ECB three months to prove that its key stimulus program was justified and appropriate.

In addition, the court criticizes the Bundesbank, the German central bank, which is the heaviest member of the Executive Board of the ECB, for participating in the scheme to help stabilize the single currency and eurozone member states. Under the constitutional court's ruling, the Bundesbank should not participate in the program unless the ECB reaches a new decision on the program that demonstrates it respected the "principle of proportionality."

According to the court, Italy is one of the countries that are the most reliant on ECB bond purchases, because of the severe economic impact of the coronavirus pandemic. Italy has the highest public debt per inhabitant in Europe and a stagnating economy. Among other countries are Spain, Portugal and France.

If the explanations of the ECB expected in the next three months do not satisfy the German Constitutional Court, the Bundesbank could have to pull out of the ECB, which would be a terrible blow to the eurozone, and would probably mean the end of the euro as a currency.

Crisis of Bundesbank and ECB in Germany

Tuesday's verdict of the German Constitutional Court put an end to numerous lawsuits by German critics of the ECB’s tool to support the euro, including the economist and co-founder of the Alternative for Germany (AfD), Bernd Lucke, who was a member of the European Parliament from 2014 to 2019. The AfD is among plaintiffs.

"It took nearly five years of trial, but the Federal Constitutional Court ruling is clear: the ECB's bond purchase programs are largely incompatible with the German basic law. This confirms our legal view: the ECB has been acting for years beyond its competence. It is in contradiction with the German constitution and incompatible with EU contract law," Peter Boehringer, the budget spokesman for the AfD in the Bundestag, told Sputnik.

According to the spokesman, the top court also criticizes the federal government and the Bundestag for failing to fulfill their constitutional mandate, which is to ensure that action of the Bundesbank and the ECB were lawful.

"According to the Federal Constitutional Court, the Bundesbank is now prohibited from continuing to participate in the ECB's bond purchase programs. The purchase of government bonds obviously serves economic and fiscal goals. But the ECB's mandate is limited to pure monetary policy. Any attempt to provide a reason for the bond purchases in this instance is doomed to fail. The ECB purchases were not proportionate as they should have been," Boehringer added.

Based on this judgment, the AfD group is now demanding the termination and reversal of bond purchases within the Public Sector Purchase Program (PSPP) launched in 2015, for which a reason for the proportionality at the time cannot be provided. It is also demanding the termination of the ECB's new bond purchase program (PEPP) for the same reason, as well as a clearer wording of Article 123 of the Treaty on the Functioning of the European Union on the ban on monetary government funding in order to limit the scope for interpretation.

This is an explosive issue that could completely paralyze the ECB Quantitative Easing program. According to a German civil servant at the European Commission, who prefers to remain anonymous, if such a decision was made by a supreme court in the republic of Ireland or Portugal, it would not have the same impact.

"Here, it is the highest court in the largest contributor to the Euro, heaviest in the eurozone, that wants rules to be strictly applied and worse, that could decide for a reversal, a refunding of the bond purchases. A real headache for Christine Lagarde!" the civil servant said.

For years, inflation has been at a level deemed "extremely low" by the former President of the European Central Bank, Mario Draghi. The ECB wants to keep the inflation rate below 2 percent but close to this maximum threshold. There is a fear that Europe would settle in deflation, namely the general and lasting fall in prices, which will spread to wages, and further weaken the economic growth. Therefore, the ECB continues to buy state bonds.

Deflation is more serious than inflation, because it is more difficult to fight and get out of, except by using the printing press on a massive scale. As of now, the eurozone is not in deflation. Prices are falling mainly due to the drop in oil prices, which is good news for the euro area. But there is danger of deflation, especially in southern Europe.

Germany does not like printing money, as, according to Berlin, it fuels financial bubbles, and it discourages structural reforms in the states of southern Europe by depreciating the euro and facilitating debt. Germany having the strongest economy in Europe does not really fear inflation or deflation, so it does not support Quantitative Easing program.

Meanwhile, such countries as Italy, Spain, Portugal or Ireland would be the biggest winners of a new bout of QE. Italy and Spain would benefit from a more abundant and less expensive supply of credit, whereas today, they face a credit crunch. They will also benefit from the depreciation of the euro caused by this additional money supply, to export more. Nevertheless, Germany would also gain from a fall in the euro, as its growth is increasingly dependent on exports to emerging countries.

Europe is at Fundamental Crossroads

"It is always the same thing: the ECB does not respect the treaties and takes decisions which are unacceptable in law in the member states, in order to save the overwhelming imbecility that is the common currency, the euro, without a common economic and fiscal base," Gave said.

According to the economist, what the European Commission and the ECB want to do — to save the euro at all costs — clashes with the rule of law in each country.