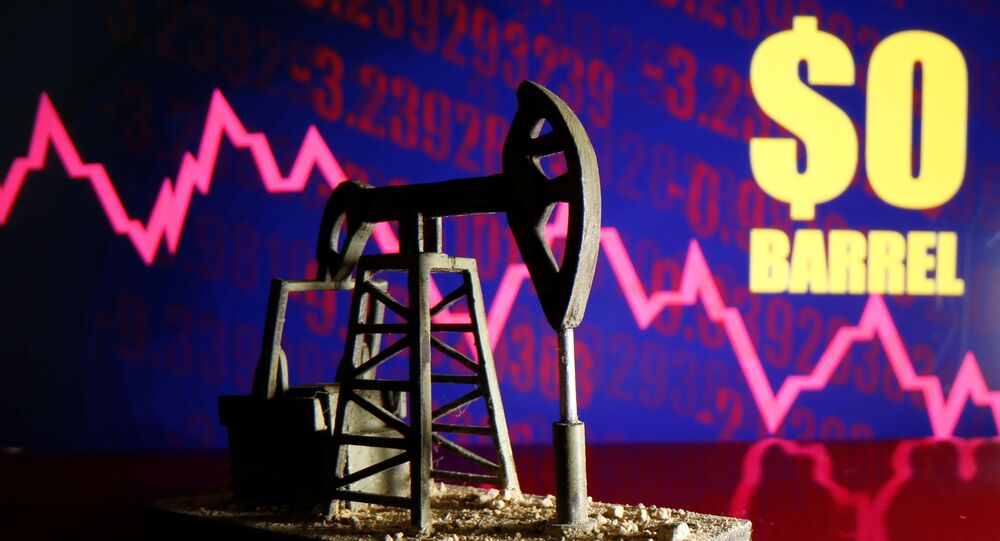 On Monday, the price of WTI crude for delivery in May nosedived to a negative value for the first time in history, reaching about minus $40 per barrel on the New York Mercantile Exchange (NYMEX).

Former BP boss John Browne on Tuesday stated that US crude prices will stay low for a certain time after they plunged to below $0 for the first time ever on 20 April.

“The prices will be very low and I think they will remain low and very volatile for some considerable time. There is still a lot of oil being produced that is going into storage and not being used”, he told the BBC.

Browne asserted that the current situation is “very reminiscent of a time in the mid-1980s when exactly the same situation happened - too much supply, too little demand and prices of oil stayed low for 17 years”.

He said that the current price glut was a US issue that occurred due to a lack of storage, adding, though, that global crude demand is falling while production is still high.

Browne suggested that the demand for hydrocarbons “will continue to be weak”, something that he claimed will “be filled primarily by those who have no choice but to produce oil - so the state oil companies of the world”.

The remarks came as the price of West Texas Intermediate (WTI) crude for delivery in May returned to a positive value earlier on Tuesday, and is now trading at $2.21 per barrel on the New York Mercantile Exchange (NYMEX), according to trading data.

This was preceded by WTI crude prices plummeting to minus $37.63 a barrel on Monday for the first time in history as traders tried to get rid of their positions at any cost on the last day of trading.

"The U.S. Crude future for May delivery suffered the biggest fall ever and finished with a negative price of  $37, which is a painful reflection of the severe overcapacity of the U.S. oil producers and refineries. The drop in demand for oil in America is so dramatic because of the lockdown, that there is not enough storage space to accomodate the oil supply. Demand is expected to pick up in May, when several U.S. states will start removing the lockdown measures. I expect that oil prices will remain very subdued until then," says Yannis Koutsomitis, a political and economic analyst from Belgium.

Mamdouh Salameh, an oil economist and Professor of Energy Economics at the ESCP Europe Business School, believes that aside from the collapse of the global demand for oil, US shale oil producers face problems of "mushrooming debts almost approaching $1 trillion, inability to export their oil in the current situation and also lack of storage of their own.

"Hiring storage could cost them more than the current price of WTI They have to offer their oil even free of charge to get rid of it rather than incur the cost of storing it", he opines.

The price collapse took place against the backdrop of the ongoing coronavirus pandemic that had led to a slowdown in economic activity across the world, which in turn resulted in plunging global oil demand.

"The problem for the oil market is that COVID-19 has delivered a massive short-term hit to crude demand and oversupply conditions are at a breaking point as global storage capacity is almost tapped.  [Monday's] crash will provide a wake-up call for many investors who were waiting for a gradual grind higher with oil prices in the second half of the year. This is sadly the story that will mean the end for many of the smaller oil drillers in the US. Bankruptcy and strain on credit markets will provide a massive negative deterrent for risk appetite across the broader markets", Edward Moya, senior market analyst at OANDA in New York, concludes.

Last week, Saudi Arabia, Russia, and other petroleum-exporting nations agreed to slash their oil production by 9.7 million barrels per day through June, in a bid to stabilise the COVID-19-hit oil market.