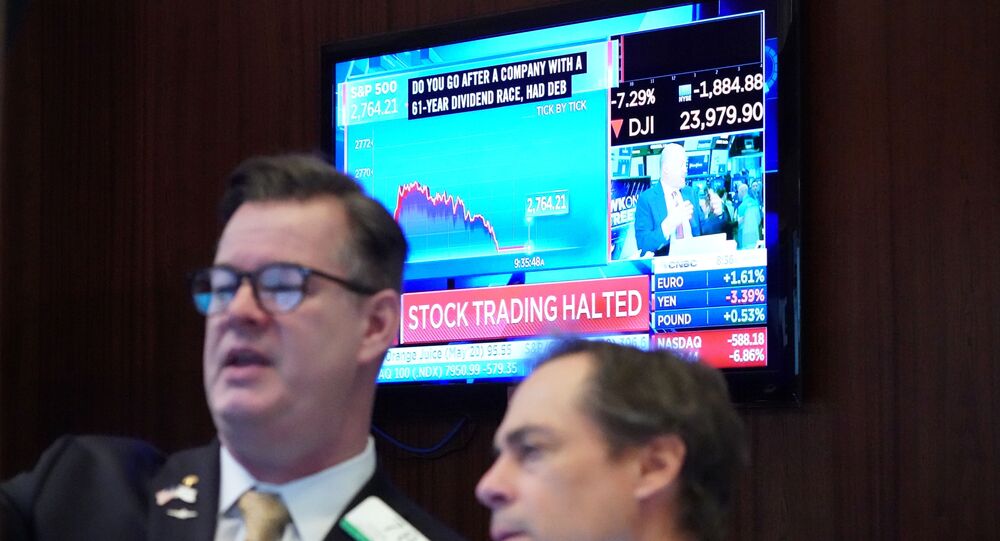 The New York Stock Exchange (NYSE) finished Monday with its worst loss since December 2008, with the Dow Jones declining by more than 2,000 points. The collapse was spurred by an anticipated economic downturn caused by the spreading COVID-19 coronavirus and its associated quarantines, travel restrictions and decreased trade.

When trading began Monday morning, it immediately triggered a rush to sell, sending stocks tumbling so rapidly that within an hour, automatic safeguards put in place to prevent a 1929-style crash triggered, temporarily halting trading after a 7% loss in market value. Stocks didn’t sink much more over the course of the day, even though one item of bad economic news after another flowed in.

According to the New York Times, the last few weeks of stock losses have returned the markets to roughly where they were in June 2019.

The Organization of Petroleum Exporting Countries (OPEC) slashed oil prices on Monday, anticipating a major decline in oil purchases as global trade and travel see increasing restrictions put in place by governments attempting to control the spread of the novel coronavirus that began in Wuhan, China, late last year. By the end of trading on Monday, US oil futures were down by 25%, with Brent crude losing 23.9% and West Texas Intermediate losing 25.05% of their value.

“Crude has become a bigger problem for markets than the coronavirus,” Adam Crisafulli, founder of market news outlet Vital Knowledge, told CNBC over the weekend. “It will be virtually impossible for the [S&P 500] to sustainably bounce if Brent continues to crater.”

Sharp sales declines followed a weekend full of news of the coronavirus, which has already killed nearly 4,000 people around the world, being identified in a growing number of US cities, including the largest city, New York, and the capital, Washington, DC.

Extremely low predicted yields on US savings bonds further hurt trading, with the yield on the benchmark 10-year Treasury note falling below 0.5% for the first time in history and the 30-year rate falling below 1%.

Center for Economic and Policy Research co-founder Dean Baker told Radio Sputnik’s Loud and Clear Monday that “the stock market doesn’t tell you much of anything … it doesn’t have much direct impact on the economy.”

“This is going to be a very major hit to the economy, and how long, how hard: totally unclear. This could last for months; it could last longer. What is the administration going to do to get it under control? I mean, the first thing you have to say is, they have to acknowledge the seriousness,” he said, noting it seems Trump’s main concern “is to try to minimize the coronavirus so that he can act like everything’s fine.”

“Oil was already in oversupply in lots of respects, in the sense that you had producers - the US shale producers being the most obvious … you combine that with a sharp fall in demand due to the coronavirus … and certainly from the standpoint of the producers, OPEC and Russia, they would look to have a corresponding reduction in supply,” Baker told hosts Brian Becker and John Kiriakou. “Apparently those have failed.”

Baker noted that Saudi Arabia is essentially the only oil producer capable of still making money if oil prices drop as low as $30 per barrel, meaning that, contrary to White House boasting, US shale oil producers will not rush in to “take up the market share” caused by a decline in Saudi or Russian production.

"These attempts by state actors to manipulate and shock oil markets reinforce the importance of the role of the United States as a reliable energy supplier to partners and allies around the world," US Energy Department spokeswoman Shaylyn Hynes said in a statement Monday evening.

US President Donald Trump has seemingly tried to assuage panic over the spreading virus with an “all is well” message. On Sunday, he tweeted the White House had a “perfectly coordinated and fine-tuned plan,” and early Monday morning, he blamed “The Fake News Media and their partner, the Democrat Party” for “doing everything within its semi-considerable power (it used to be greater!) to inflame the CoronaVirus situation.”

As markets plunged Monday morning, he tried to deflect blame for the losses to a supposed feud between Russia and Saudi Arabia over oil prices:

​Later that day, Trump tweeted that the number of coronavirus deaths pales in comparison to the total from influenza, noting that “Nothing is shut down, life & the economy go on.” He has also promised not to cancel his upcoming mass political rallies.

​However, in a bid to stem the collapse, Trump met with top economic and financial officials Monday afternoon to discuss economic stimulus measures the US government might undertake to buttress flagging confidence in the market. Trump has also organized a separate meeting with Wall Street executives on Wednesday, Politico reported.

On Friday, Trump signed a bill providing $8.3 billion for coronavirus-related measures, including research and preparation.

World Health Organization (WHO) Director-General Tedros Adhanom Ghebreyesus said on Monday, "Now that the virus has a foothold in so many countries, the threat of a pandemic has become very real,” but noting that “it would be the first pandemic in history that could be controlled."

There are more than 113,000 confirmed cases around the world of COVID-19 and more than 62,000 people who were infected with the disease have since recovered.