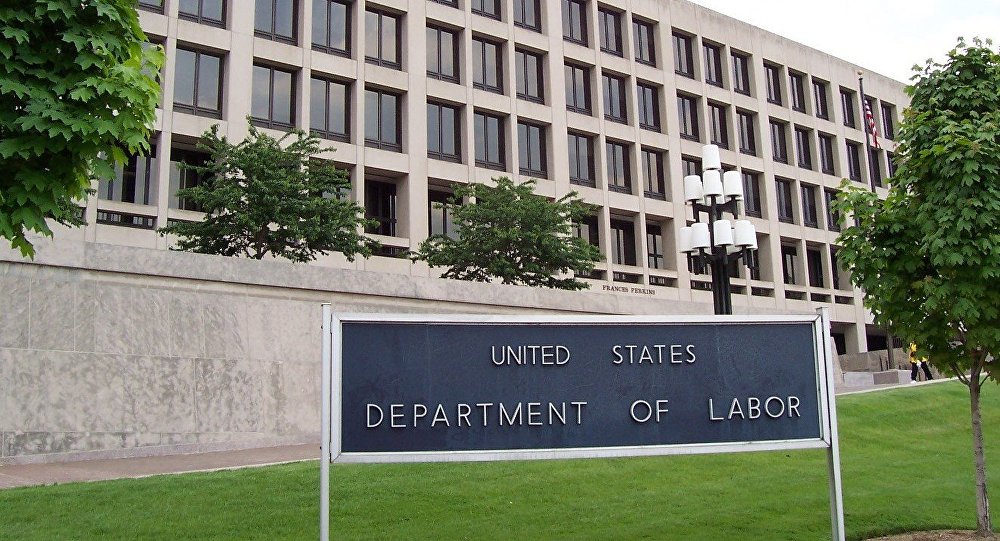 US unemployment is gradually declining and hiring is on the rise, translating into a modest pickup in salaries and wages – albeit some experts say last month’s gains are still insufficient to support a greater acceleration in the broader economy.

Kristian Rouz — The pace of US job creation gained momentum last month as a result of quicker GDP growth in the second quarter and labor shortages across several sectors of the economy. Lower unemployment and higher demand for skilled workers pushed average wage gains up nationwide, however, the redistribution of these gains were uneven, with some industries lagging behind.

According to a new report from the Labor Department, the US economy is running out of available workforce, with the unemployment rate falling to its lowest since 2001 and wage growth hitting its fastest since 2009. The report suggested that the US is likely bracing for a spike in inflation and yet another hike in Fed interest rates.

© AFP 2019 / BRENDAN SMIALOWSKI
Federal Reserve Officials Hint at Change in Methodology, Policy-Setting
Unemployment dropped to 3.85 percent in August, compared to 3.87 percent the previous month, the Labor Department said. Meanwhile, the labor participation rate dropped to 62.7 percent last month from 62.9 percent in July — suggesting that a significant share of the working-age population is still not seeking employment.

Economists say the ongoing decline in unemployment rate was inspired by the $1.5-trillion tax cuts implemented by the GOP and President Donald Trump last December. Additionally, economic deregulation and an increase in corporate profits allowed private-sector companies to ramp up their workforce investment, producing modest gains in wages.

US salaries and wages rose 2.9 percent year-on-year in August.

"With the tax cuts and spending increases creating a sugar high, there is little reason to expect labor demand to moderate over the rest of this year or even in the first half of next," Joel Naroff of Holland, Penn.-based Naroff Economic Advisors said.

© AP Photo / Manuel Balce Ceneta
US to Restart NAFTA Talks With Canada Next Week
However, August figures are seen as hardly driving a substantial increase in disposable incomes of American households. US wage growth hasn't exceeded 3 percent since the Great Recession, whilst the rising consumer prices, elevated costs of credit and healthcare — as well as broader inflation — could effectively offset these gains.

Despite the upbeat figures, there is still some concern lingering over the path of economic rebound in the US. According to Shadowstats, its broadest measure of US unemployment decreased to 21.2 percent in August from 21.3 percent the previous month — the figures reflect those formally outside of the labor participation pool, yet supposedly seeking employment in one form or another.

Meanwhile, the US economy added 201,000 non-farm jobs last month, posting a 95th consecutive month of gains — the longest period of expansion on the record.

"The job market is hot. Employers are aggressively competing to hold on to their existing workers and to find new ones. Small businesses are struggling the most in this competition, as they increasingly can't fill open positions," Mark Zandi of Moody's Analytics said.

© CC0
Tech Giants Testify to Congress as ‘Five Eyes’ Demands Access to Encrypted Data
The Labor Department also reported gains in health care and transportation sector employment — albeit the highest demand for workers has been recorded in the oil-producing states of Texas, North Dakota and New Mexico.

Analysts have expressed concern at the still modest gains in worker compensation despite the accelerating GDP, rising inflation and a tighter labor market. Hourly pay only gained 2.7 percent year-on-year — whilst historically, the figure was up to 4 percent at unemployment levels this low.

The Trump administration said salaries and wages have risen quicker this year than the official data show; however, some experts doubt it.

"Wages aren't yet rising fast enough to scare the Fed, but (there is) the expectation that further gains are in the pipeline, given the lag from falling unemployment," Ian Shepherdson of Pantheon Macroeconomics said. "Unemployment was unchanged in August, but the monthly data are very erratic and the trend is still falling."

READ MORE: 'Trump Sees Trade as Game in Which a Country Wins and a Country Loses' — Prof

All this suggests that the US economy is very gradually shifting gears towards a quicker and a more balanced expansion. As of now, structural discrepancies and unequal growth across various sectors of the economy are still weighing on the supply-side expansion, holding back any visible gains in household incomes and consumer demand — the key drivers of US GDP growth.