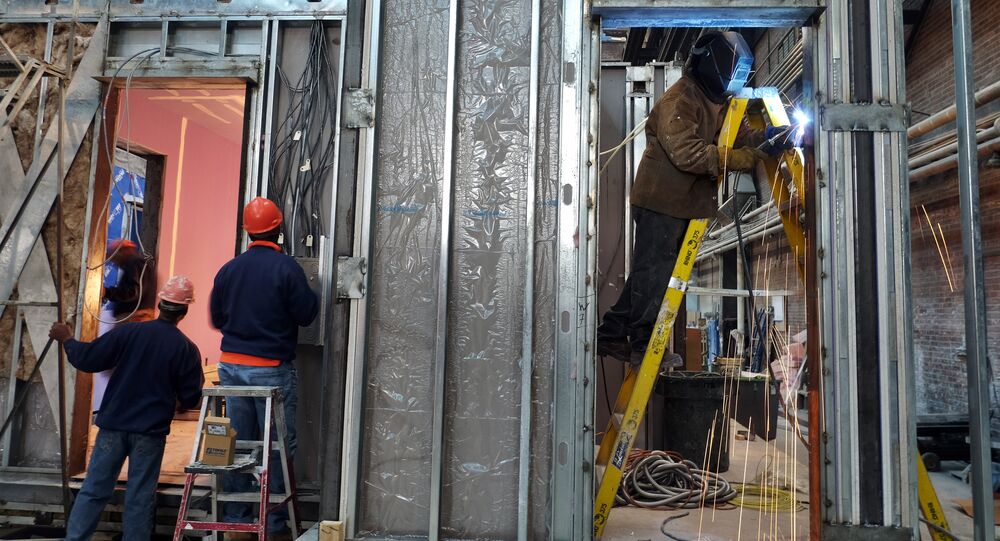 US Labor Shortage Critical as Companies Struggle to Lure Workers In

Making lots of jobs was one of the pillars of Donald Trump’s presidential campaign. He appears to have delivered, with 6 million jobs opening in the last year-and-a-half. But why are there still 6 million unemployed?

The US is about to face an unprecedented employment crisis "of epidemic proportions," a report by CNBC says, as US employers are struggling to get their staff filled now.

As Sputnik reported recently, US companies are having a hard time hiring people now. US businesses relied on a foreign workforce for years — be it moving factories offshore or hiring migrants on domestic soil — now have a hard time convincing US citizens to work under the same conditions, with some companies even resorting to hiring ex-cons and inmates.

© AP Photo / Mary Altaffer
Why Work Anymore? US Faces Workforce Shortages Amid Dismal Participation Rate
With approximately 6.7 million job openings, US companies lack not only qualified workers, but also unqualified ones, CNBC noted. At the same time, there are some 6 million people the Bureau of Labor Statistics lists as unemployed. One would think those two numbers should collapse themselves automatically, right? Wrong.

In June, some 177,000 people were hired, the report says. That may sound a lot, but that's less than what the market expected. Four months in a row have reported this figure being below 200,000, while the four previous ones were above it. There is still a huge demand for both truck drivers and Silicon Valley-grade tech specialists.

And the problem, it seems, is actually quite simple: companies must abandon their immigrant-level dismal salaries and start paying better. Still, employers have been slow to do this so far. Jim Baird, chief investment officer at Plante Moran Financial Advisors, seems to agree with the solution.

"Pressure is building for employers, and both hard data and anecdotal reports indicate that wage pressures are building," he said, according to CNBC. "With the economy still humming, employers are able to justify stronger wage increases to retain or attract talent, but it's becoming a more challenging proposition."

However, companies have largely remained inert on the issue.

"Even as employers struggle to hire workers, wages remain stagnant. Average hourly pay has held flat for the past year after adjusting for inflation," CBS reports, citing US Labor Department statistics.

With their wages not increasing, workers started switching jobs at an astounding rate, with approximately 3.4 million quitting their jobs in April alone in search of better-paid positions.

© CC0
Gay Men Have Higher Salaries Than Straight Men in US - Study
Some businesses that are more flexible and aware of the job market situation have started catering to their employees to keep them in the staff "in a way they might not have considered in years past," CBS says.

For example, Derek Volk, president of Volk Packaging of Maine, told the Wall Street Journal he recently let a worker push back her start time due to a daycare issue involving her dog.

"A few years ago, that would have been a ridiculous ask, but now you have to be flexible," he told the newspaper.

Of course, as always with the economy on a national scale, things are not that simple. A simultaneous raise in wages across the nation could mean an increase in prices or even boost inflation, making money worth less than before.

"How much might rising labor costs chew into corporate profits? How much will be passed through to customers in the form of higher prices? That remains to be seen," Baird said. "Rising labor costs will boost take home pay, but we're also all likely to see the effect in rising prices for goods and services."

© AP Photo / Richard Drew
Federal Reserve Helped US Top Banks to Avoid Stress Tests Failure - Reports
With inflation rising, the Federal Reserve will step in an take action, raising interest rates. The market remains skeptical about this happening in 2018, but data show that traders give it a 51 percent chance of happening. There have also been discussions that the Fed will increase rates several times to continue the unwinding of quantitative easing monetary policies.

The economy has "bumped against the proverbial labor wall," says David Rosenberg, chief economist and strategist at Gluskin Sheff. "Inflation pressures will intensify and the Fed will be forced to act more aggressively, just as has been the case in the past. There is no Presidential Tweet that will stop Mother Nature from taking its course."