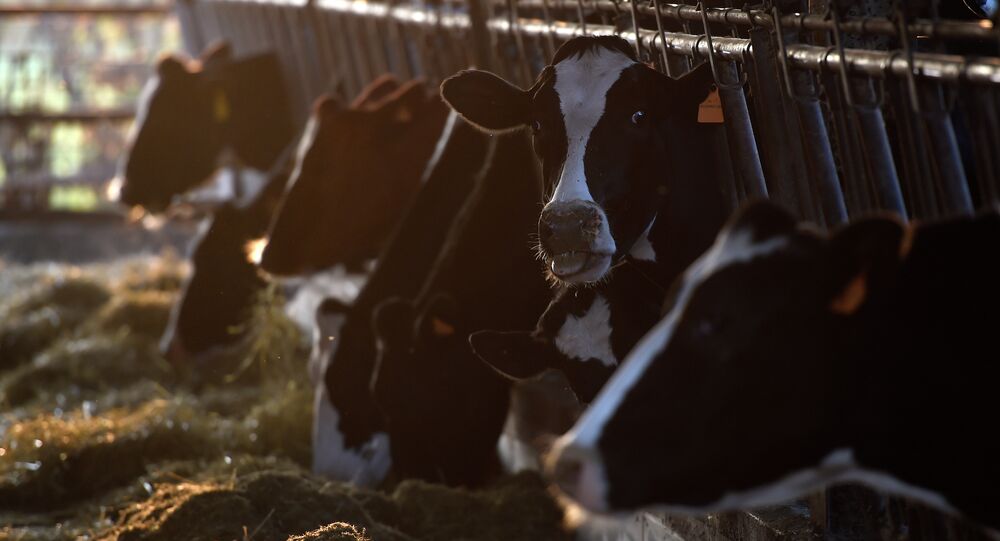 During the G7 summit in Quebec, US President Donald Trump proposed the creation of a tariff-free trade zone between member nations, particularly using Canada as an example, and that ruffled a few feathers.

As Sputnik reported earlier, US President Donald Trump suggested the creation of a tariff-free trade zone between G7 member nations.

"No tariffs, no barriers — that's the way it should be. And no subsidies. […] That would be the ultimate thing, whether or not it works, but I did suggest it," Trump said in a news conference in Quebec on Saturday prior to his departure for Singapore.

"In other words, let's say Canada, where […] the United States pays tremendous tariffs on dairy as an example — 270 percent — nobody knows that […] we don't want to pay anything. Why should we pay? Ultimately that's what you want — you want a tariff-free [zone], you want no barriers, and you want no subsidies because you have some cases where countries are subsidizing industries and that's not fair."

© REUTERS / Leah Millis
US Representatives Told by Trump to Not Endorse G7 'False Statements' Communique
According to the CBC, Canada does impose a 270 percent tariff on milk, a 245 percent tariff on cheese and a 298 percent tariff on butter, as a means of keeping imported products out of the dairy-rich country.

Canada, like almost every other nation, tightly controls homegrown products — in this case dairy products — to assure that its farmers are paid fairly. The so-called protectionism has earned Ottawa the nickname of "Soviet Canuckistan," courtesy of the US arch-conservative pundit and Republican presidential adviser, Pat Buchanan.

​"Canadian and US dairy industries are fundamentally different. While Canadians enjoy stable prices and supply, the US market is vulnerable to unexpected surplus of product, driving prices down for farmers and disrupting the market for consumers," Dairy Farmers of Canada president Pierre Lampron noted, cited by CBC.

As The Guardian puts it, "Canadian cows are sacred," and some opine that Canadian farmers influence Canadian politics so deeply that Prime Minister Trudeau would likely drop any trading agreement that endangers the popular and profitable Canada dairy industry.

Happy #WorldMilkDay! Here’s a shout out to Alberta's (and Canada's) hard-working dairy farmers! June is also Dairy Month, and we're all going to #RaiseAGlass and enjoy many cold glasses of milk this month.#DairyMonth #supportlocalfood #CdnAg #AbAg pic.twitter.com/GIi1Pz9ATe

​Canada's "system works so incredibly well," pointed out Bruce Muirhead, associate vice-president and professor of history at the University of Waterloo.

"The big thing about supply management is that it doesn't cost the government a cent. Consumers pay the full cost of production."

"It's just too sensitive for Canadians," Kevin Carmichael, a senior fellow at the Centre for International Governance Innovation in Waterloo, recently told CNBC news.

whitehouse.gov
Trump Throws Allies Curveball, Proposes G7 'Zero Tariff, Zero Subsidies' Trade Zone
The US, being export-oriented, has found itself in a bind, as competitive exports have become the only way for American factory dairy facilities to be profitable. The price for milk and dairy products is kept artificially below cost through Washington subsidies and so US farmers massively over-produce.

Without a corresponding demand, the unregulated and subsidized US factory-farm corporations will not be profitable, and will face reorganization at the hands of shareholders and the courts.

Last year, US farmers shockingly destroyed almost 100 million gallons of unsold milk, The Guardian reported. If that's not bad enough, there has been a wave of farmer suicides recently that has rung a national alarm, referred to by the New York Times as "the widespread hopelessness afflicting the industry."

In Avon, where @SenSchumer talking about NAFTA’s impact on dairy farmers. pic.twitter.com/dtC6pItXrH

​When it comes to numbers and money, The Guardian reports that the entire issue is worth some $600 million, a tiny figure when measured against a 2017 US trade deficit of $566 billion.

Why does Trump consider it worth discussing? Is there a Trump property or golf course that stands to benefit from destroying Canada's protectionist dairy policies?

"Let me be clear: These tariffs are totally unacceptable," Trudeau said at a press conference while announcing response measures including new retaliatory tariffs against US goods worth $12.8 billion, cited by Business Insider.

The consistent profitability of the $660 million US dairy industry represents a fraction of the almost $13 billion retaliatory response posed by Trudeau, but how the game will be played out over the following months is anyone's guess.