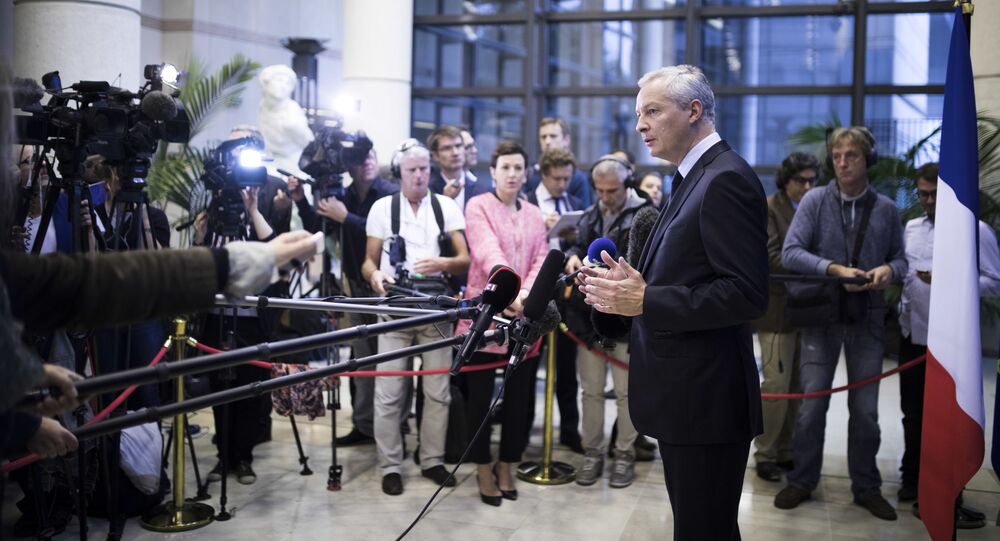 Earlier, the chief of the EU Commission, Jean-Claude Juncker, stated that Brussels planned to apply a 1996 law that would prohibit European companies from complying with any sanctions the US would reintroduce against Tehran.

The French finance minister Bruno Le Maire has stated that authorities were exploring the ways, which would allow the EU to be able to compensate European companies that could face US sanctions over the Iranian nuclear agreement.

"Do we accept that the United States is the economic gendarme of the planet? The European response must be clearly no," the French minister told Europe 1, adding that "the reinforcement of the 1996 regulation would allow us to bear the eventual price of sanctions paid by companies, and which could be paid by the EU."

Le Maire also suggested establishing an independent financial system that would put an end to Europe's dependence from the US credit and banking systems.

© AP Photo / Thibault Camus
France Wants to Defend EU Firms From US Sanctions on Iran - French Minister
These statements echo the words of the EU Commission President Jean-Claude Juncker, who noted on Thursday, that the EU intends to apply a 1996 law in order to prohibit European business from complying with newly re-imposed anti-Iranian sanctions, also saying that the European leaders to allow "the European Investment Bank to facilitate European companies' investment in Iran."

Earlier this month the US President Donald Trump stated that his country had withdrawn from the Joint Comprehensive Plan of Action (JCPOA), also known as the Iran nuclear deal. He also vowed to reinstate the sanctions against Iran that were lifted as part of the agreement, urging other countries to follow his lead.

READ MORE: Sanctions on Iran: ‘EU was Not Prepared to Tackle Such a Situation'- Researcher

Addressing Trump's announcement, the leaders of France, Germany, and the United Kingdom expressed their regret over Trump's decision in a joint statement, stressing their countries' commitment to the deal.