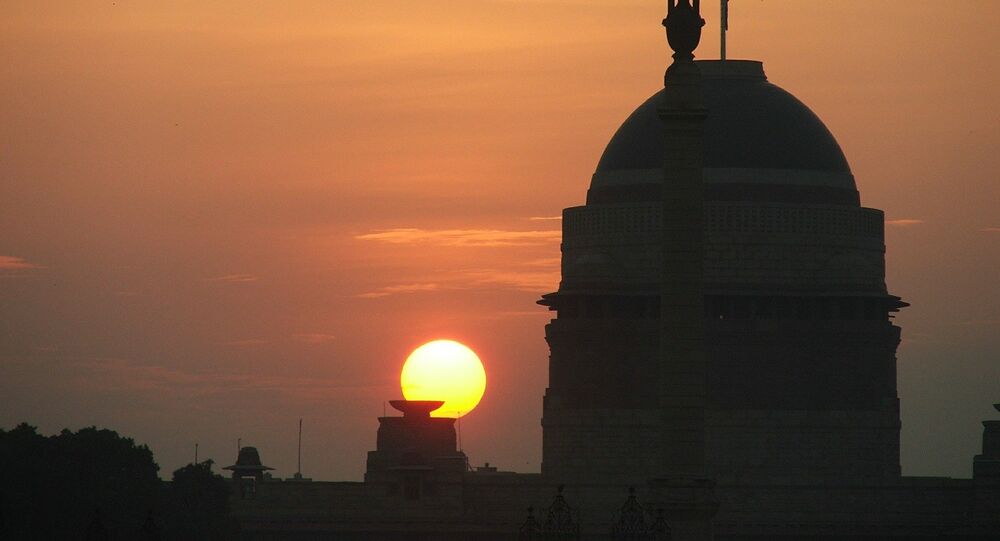 A study conducted by Hugo Erken, Raphie Hayat and Marijn Heijmerikx of Rabobank International indicates that US trade and monetary policy will also have a substantial effect on the Indian economy and could hurt India’s dream plan to boost infrastructure spending.

New Delhi (Sputnik): Days after India announced it will not take sides in the ongoing tariff war between the US and China, a detailed study claimed that in any case, India could fall victim to adverse trade policies of the US and/or China that have the potential to wipe out 2.3% of the country's GDP by 2022.

The Rabobank study predicts grim challenges for the Narendra Modi government which aims to push economic growth to at least 8% per annum in the next five years to replace Germany as the fourth largest economy of the world.

"Besides a possible trade war, a faster than the expected tightening of US monetary policy will hurt India, namely via capital outflows," the study says.

© AP Photo / Andy Wong
China Prepares Emergency Response Plan Amid Trade Showdown With US
To get an idea of the implications of a possible trade war on the Indian economy, the economists assessed three possible scenarios: 1) China targets Indian exports, 2) the US targets Indian exports and 3) India retaliates to US protectionism.

The study says that the Trump administration wants support from its allies in tightening the trade screws on China. If India decides to align with the US on the issue, New Delhi would face higher tariff (up to 20%) on its exports to China which would shave off up to 0.4ppt of Indian GDP in 2018 due to shrink in $11 billion exports.

"If India chooses not to side with the US in targeting China, and the US penalizes India with a 20% levy on Indian exports, our calculations show that the damage on GDP could total 0.9% up to 2022. The higher impact is due to the fact that the US is a more important trading partner for India than China. In a third scenario, India retaliates the protectionist measures of the US by targeting US exports by an equal tariff of 20%. In this case, the Indian economy could face total losses as large as 2.3% up to 2022," the study paper reads.

READ MORE: 'US, China Trade Tiff a Posturing; Will Not Take Sides' — India

Indian Prime Minister Narendra Modi has set a goal to eliminate problems like poverty, stunting through massive infrastructure build up by 2022. The target is prominently focused on the construction of road, rail and waterways to push inclusive growth in the economy.

An acceleration of the Fed tightening cycle would result in India losing USD 22bn in missed capital inflows up to 2022 #raboresearch https://t.co/O81Db9XEoR

But, Rabobank study predicted grim challenges before the Narendra Modi government as per the present global situation. "Besides, a possible trade war, a faster than the expected tightening of US monetary policy will hurt India, namely via capital outflows," it says.

The study estimate that the tightening of the monetary policy by the US Federal Reserve will result in India losing $22bn in lost capital inflows up to 2022.

"Our model also indicates that in case political risk rises in India and the INR depreciates sharply, missed capital flows will amount to $32bn by 2022," it warned.

All in all, these developments will create major speed bumps on India's road to economic prosperity, the report concludes.