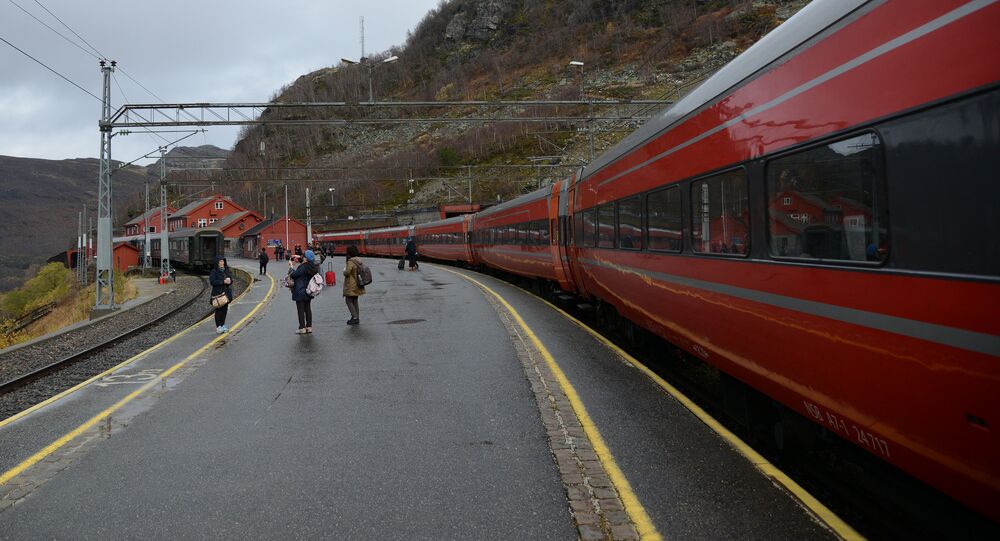 Despite offering a convenient alternative to hundreds of thousands of passengers currently flying between Stockholm and Oslo, China's proposal of a high-speed railway reducing the traveling time to just below three hours have polarized the Nordic countries.

As Beijing's investments in the EU keep soaring, China's proposal of a high-speed railway link has enflamed a hot debate in Scandinavia.

A delegation from the China Association for Promoting International Economic & Technical Cooperation visited Oslo to discuss the potential railway project, offering both financing and the expertise to expand the initial offering, Alf Johansen of the Värmland-Østfold Border Committee told Swedish Radio.

"It is in Norway's, Sweden's and China's interest to build a profitable, safe, environmentally friendly and fast high-speed rail between Oslo and Stockholm. This will contribute to better cooperation in the Nordic region and a faster development of the region, Huang Xin, the leader of the Chinese delegation, told the Norwegian Dagsavisen daily.

One of the potential projects involves rebuilding and refining existing rail lines at a cost of over 50 billion SEK ($6.3 billion). A second possibility would see an entirely new high-speed railway built at a cost of around SEK 170 billion kronor ($22 billion), both effectively cutting the traveling time from over five hours to less than three. The service is touted as an especially convenient alternative for the roughly 1.5 million travelers per year who currently choose to fly between the Nordic capitals.

© AP Photo / Fabian Bimmer
Elation as Yet Another Part of Sweden's Volvo Group Goes Chinese
While Johansen argued that the project was a lucrative one, with potential profits arriving after just a few years, Swedish reactions have been more wary. Sweden is currently embroiled in a hot debate about increasing Chinese investments, particularly revolving around the proposed giant container harbor in Lysekil, which its detractors claim is an environmental and security risk.

In his opinion piece, unequivocally titled "Don't let China build a Swedish-Norwegian railway," Aftonbladet's leading columnist Daniel Swedin pointed out that China's investment in the EU increased by a whopping 76 percent in 2016 alone, following which the EU Commission called on member states to stop selling ports, telecom companies and energy production to China.

"There is no one who has opposed it, as far as we have noted. On the contrary, our transport minister has publicly stated that it is open for those who wish to make such an investment," Johansen told Swedish Radio.

Even Pyry Niemi, the chairman of the Nordic Council's Committee on Growth and Development, supported the project, voicing faith in the cheaper variant to improve the existing connections.

Having opened its first high-speed railway just over a decade ago, China now possesses the world's longest high-speed network.

#China is building the world’s largest #BulletTrain network. The #map shows the impressive work that is in progress. Via @TheEconomist Source: https://t.co/pw6rBo2sB0 pic.twitter.com/hsOVjGCyih

​A high-speed railway would be in line with China's plans dubbed the "New Silk Road." The goal of the One Belt One Road project is to link 60 countries in Asia and Europe using new highways and railway connections. A broad cooperation between China and 16 European nations is currently part of this. China is already upgrading the railroad between Budapest and Belgrade.

"When fully developed, it will allow a direct train connection from Bergen to Moscow and Beijing," Johansen said, voicing his enthusiasm.

Sweden, which has the world's 21st-longest railway network spanning 13,000 kilometers, has been experiencing growing delays and disruption problems due to disrepair. In 2016, Swedish trains were found to be the worst in Europe and among the worst internationally when it comes to punctuality, with only 66 percent arriving within five minutes of their scheduled time, the Svenska Dagbladet newspaper reported.

​By contrast, the Norwegian railway system comprises only over 4,000 km of track, as the nation is more sparsely-populated and is more mountainous.

Crossing the Arctic Circle to the Midnight Sun? We invite you on a rail journey through tranquil landscapes: https://t.co/rYcma4K6nm #ecofriendly #railways #sustainabletravel pic.twitter.com/73bJ3aRuy7