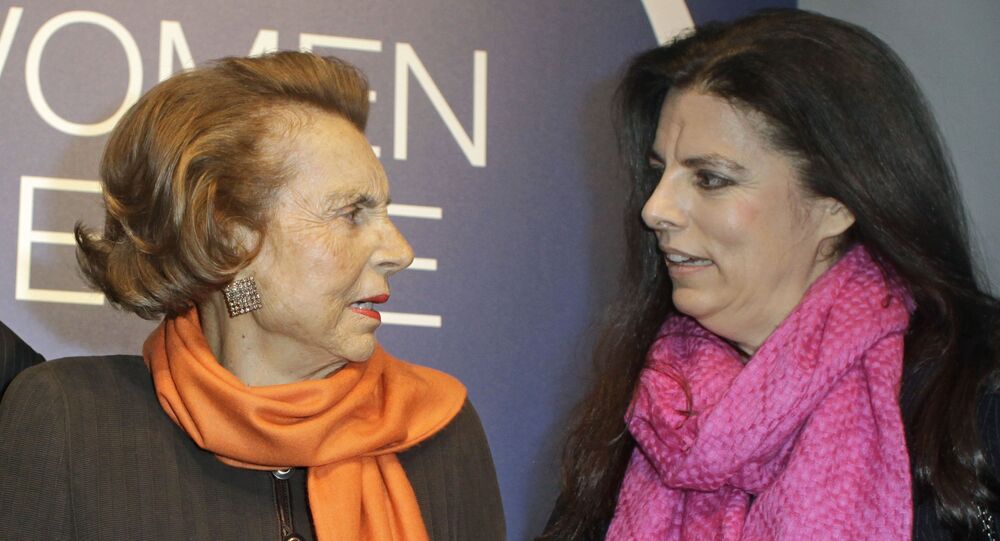 L'Oreal Daughter Set to Inherit $44Bln From Mother After Row

Liliane Bettencourt, a French cosmetics heiress who was said to be worth US$44 billion, has died aged 94. Sputnik looks back at the bitter inheritance row with her daughter, which made "l'affaire Bettencourt" the talk of Paris a decade ago.

L'Oreal heiress Liliane Bettencourt, 94, died on Thursday night, September 21, and is thought to have left her US$44 billion fortune to her daughter Francoise who tried to get her declared mentally incompetent a decade ago.

Liliane Bettencourt inherited her stake in the company in 1957 and remained on the company's board until 2012.

“Intelligence is the ability to see the sets and the views of others" RIP Liliane Bettencourt [worlds richest woman & @Loreal heiress] pic.twitter.com/eBPJVTDoq1

By the time of her death, Bettencourt was estimated by Forbes and the Bloomberg Billionaire Index to be the world's richest woman, with a net worth of US$44 billion.

But her later years were marred by a bitter legal dispute with her daughter, Francoise Bettencourt-Meyers, who claimed she was senile and not mentally competent to handle her own affairs.

After her husband, Andre, died in 2007, Francoise claimed that a celebrity photographer Francois-Marie Banier had been fraudulently exploiting his mother's vulnerability.

Banier, who denied the charges, had befriended Bettencourt, who was 25 years his senior, and received more than US$1 billion worth of cash, artworks and other gifts.

Bettencourt hit back at her daughter.

"My life is my life," she said in one French TV interview.

The pair never spoke to each other again, but Francoise is set to inherit the title of the world's richest woman.

Banier was found guilty of exploiting Bettencourt but was given a suspended prison sentence.

The "Bettencourt Affair" garnered even greater publicity when a French President became drawn into the dispute.

Bettencourt's butler secretly recorded her conversations, some of which mentioned some of President Nicolas Sarkozy's top aides.

Prosecutors launched an investigation into whether Sarkozy received illegal campaign contributions from Bettencourt.

The investigation unearthed no real evidence but the affair still damaged Sarkozy, who failed to win re-election in 2012 and did not even manage to get his party's nomination for this year's presidential election.

The company marched on, despite two world wars, to become one of the world's biggest cosmetics empires, swallowing up other brands like Lancome and Garnier.

Today a great lady of #fashion passed
Our thought is addressed to L'Oréal and Madame Liliane #Bettencourthttps://t.co/ayAdQLcLjb thanks her pic.twitter.com/IUsxEb7Xj6

In 1950, Liliane Schueller married Andre Bettencourt, a politician who dallied with fascism in his youth and was France's foreign minister for two weeks in 1972.

"We all had a deep admiration for Liliane Bettencourt, who always looked after L'Oreal — the company and its employees, and was dedicated to its success and development," said L'Oreal's president, Jean-Paul Agon, in a statement.