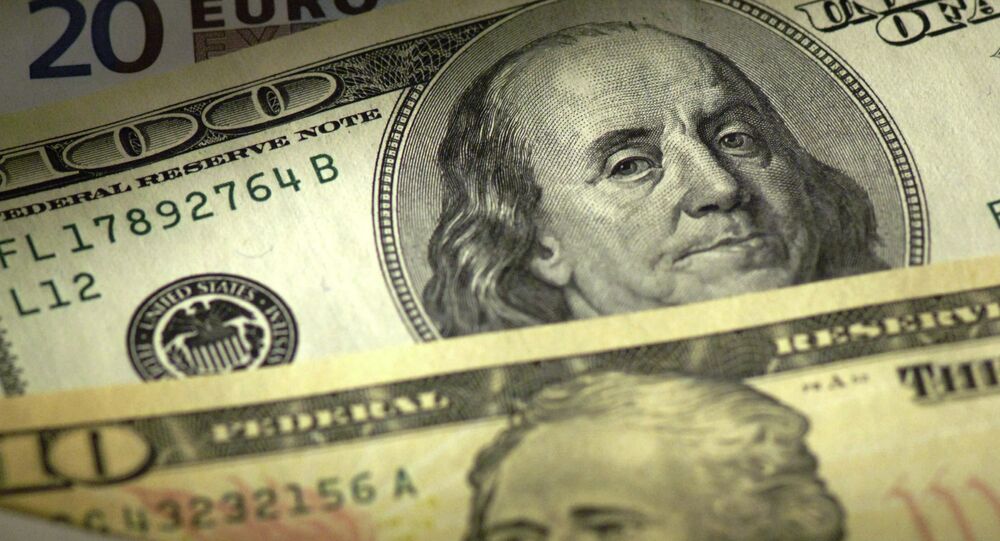 As investors realise the economic reforms proposed by President Donald Trump will take longer to coordinate and implement due to partisan politics in Washington, the Main Street small businesses are yet again facing the pressure of disinvestment.

Kristian Rouz – US small capitalisation enterprises, listed primarily on the Russell 2000 Index, have lost some $3.5 bln of investment capital during the past week due to the uncertainty surrounding the timing and feasibility of President Donald Trump’s economic reform.

© Photo : Pixabay
Money, Money, Money: Proposed Law Would Change US Currency, Create Dollar Coin
Small caps enjoyed a buoyant influx of money after Trump with his Main Street business-friendly rhetoric was elected in November: between November and April, the Russell 2000 advanced by 19 percent, having reached the “tech bubble” level prices per share.

Now this small cap bubble is seemingly starting to crumble.

Many analysts and market participants, encouraged by Trump’s commitment to help the non-financial sector and small businesses, put bullish bets on small caps amidst the overall resurgence in domestic US investment entailing Trump’s election. Last week, however, US small caps saw the largest capital outflow since 2007, mainly due to the elevated political uncertainty surrounding Trump’s 2018 budget proposal.

Market participants are now questioning Trump’s ability to overcome the challenges of partisan politics on the Capitol Hill, and, for the time being, are trying to decrease their exposure to potential political shocks.

“In our view, this last bout of optimism is likely to signal the end of the Trump Put, as friction arises over the funding of the bill (tax reform),” Bank of America Merrill Lynch analysts wrote in a note in late April, adding that the White House-proposed economic reform will likely be smaller in scale than initially thought. Besides, small caps had become too expensive, and the rising Federal Reserve’s interest rates and a dearer credit do not make small caps more attractive.

The third week of May has proven to be the turning point for small caps, crashing after having hit their all-time highest the previous month. There is sense of disenchantment spreading on Main Street, as more business owners and small caps investors have reasonable doubts of whether Trump is able to enforce his agenda that would benefit small businesses.

“There’s some nervousness out there and people are staying in the most liquid stocks,” Andrew Brenner of National Alliance Capital Markets said. “I think we’re getting ready for a much more significant correction.”

© Photo : Pixabay
Confidence in US Economy Dips to Post-Election Low
Further declines in US small caps are therefore expected, potentially bringing back the disinvestment concerns, which had dominated the US economic sentiment throughout most of the last year. These developments in the small caps segments support the view that the US economy is still living in the Obama-era reality, and most of Trump-related optimism has been speculative thus far.

The White House, therefore, would benefit from a sooner enforcement of their economic plans, or else the Trump-related enthusiasm among US businesses will fade quickly, affecting US business sentiment and bringing overall investment levels down.

“The market is getting ready to sell off. Not just yet, but it is getting near,” Brenner said. “Facebook, Amazon, Google, Microsoft, Apple, those are the ones that have bounced back strongly. It’s left the Russell in the dust.”

© REUTERS / Carlos Barria
US Citizens Support Trump's Tax Plan, Oppose Corporate Cuts - Poll
With large US corporations extending gains amidst the small-cap struggle, Trump’s rhetoric of economic empowerment of the American people, not big business, is gradually becoming irrelevant. This is hardly the President’s fault, but his unexpected election in November rendered many market participants hysterically optimistic. Now that the economic reality is rolling back to its pre-election situation, Trump is likely to become subject of criticism.

This week, however, the Russell 2000 Index has recovered by 0.3 percent, after the White House on Tuesday introduced the 2018 federal budget, which will cut taxes.

“We still expect stronger growth, rising inflation and eventually tighter policy to drive market prices over the medium term, however, in the near-term there is good reason to question whether or not we will actually see the widely anticipated ‘Trumponomics’-related fiscal stimulus and the reflation trade that drove risk appetite for much of [1Q17],” Citigroup analysts wrote in a note.

The uncertainty surrounding the adoption of the bill keeps the small cap index subdued and exposed to further losses should any budget related complications emerge in Congress.

In case the Trump-proposed budget passes the Congress, investors might roar back with renewed optimism, and US small caps will gain a major boost. However, this boom-bust dynamics and immense volatility in the Russell 2000 Index is not good for the Main Street small businesses – more modest gains in a stable environment would have been far more beneficial.

US Economy Cools to Slowest in Three Years as Consumption Underperforms