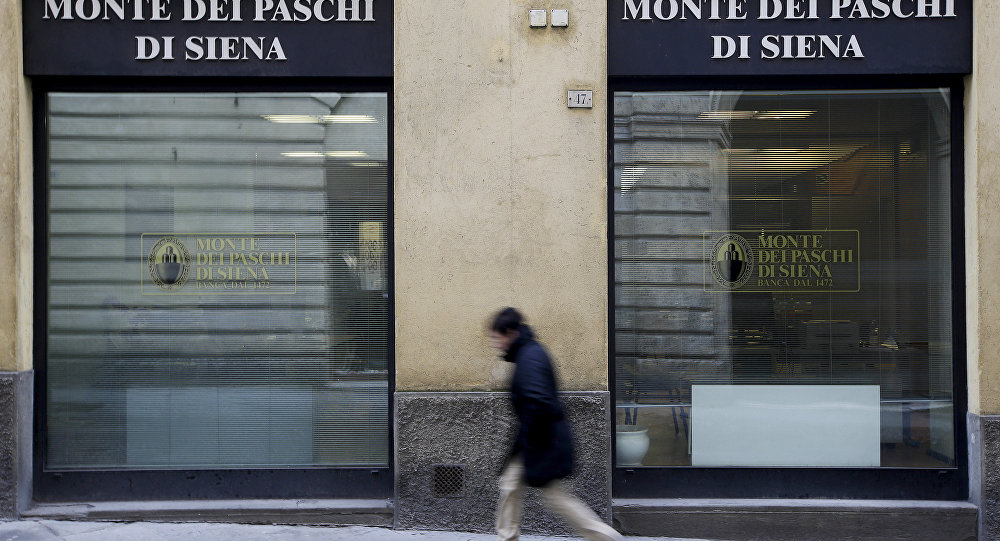 The Italian banking system, which has been overloaded by bad loans and severely undercapitalised, is on the verge of a systemic meltdown; however, the European Central Bank (ECB) refused to ‘extend and pretend’ anymore, paving way to possible nationalisations, rife populism and, ultimately, Itexit.

Kristian Rouz – After the European Central Bank (ECB) declined to assist in the recapitalisation of the crisis-hit bank Monte dei Paschi last week, the realignment in the Italian banking sector intensified on Monday.

© AFP 2019 / Filippo MONTEFORTE
Rocky Forecast for Italy After Ratings Firm Downgrades Economy
Amid the increased deal-making, propped up by concerns of Italy possibly leaving the European Union after the new cabinet is formed, Italy’s two prominent banks have taken action to increase their capitalisation in the wake of financial sector turmoil likely to come.

A Milan-based bank, UniCredit SpA, sold its subsidiary Pioneer Investments for $2.3 bln, after last week having sold its stake in a Polish bank in an effort to raise capital. Another major Italian lender, Monte Paschi, requested investor support for a larger-scale debt-to-equity swap. If approved, the deal will result in a slight depreciation of Italian banking stocks. If not, a state bailout or imminent banking collapse are further options.

The world’s oldest bank, the Italian Banca Monte dei Paschi di Siena SpA, had been in trouble for months, but it is the constitutional referendum earlier this month that made the bank’s situation nearly critical by fuelling the fears of Itexit and higher financial market volatility. Monte Paschi needs an urgent recapitalisation by 5 bln euros ($5.3 bln) in order to avoid a meltdown stemming from the dismal economic reality and low lending profitability in Italy in the recent years.

“The recap of Banca MPS on the market remains extremely difficult to realize in the current context and in such a short period of time,” Luigi Tramontana of Banca Akros said. “The alternative would be the nationalisation of the bank and burden sharing by hybrid and subordinated bondholders.”

UniCredit, on its part, with its ongoing selloff in assets, has managed to maintain investor confidence in this tumultuous period. News of the increase in capitalisation have pushed UniCredit’s stock up by 3.8pc on Monday, and a forecasted net capital gain of 2.2 bln euros next year will allow the bank to position itself as more sustainable, increasing its competitiveness in the Italian market.

© REUTERS / Alessandro Bianchi
Renzi Resignation Boosts Italy’s Economic Risks Amid Political Tumult in Europe – Fitch
With Monte Paschi, the situation is more dramatic, and state support in direct or indirect form will be unlikely to avoid. Consensus expectations in the market are that the MPS recapitalisation will require financing from the Italian government, whil all bondholders will share the burden of lower ROI on MPS equity.

Even though the Italian banking sector does not seem to be in a desperate state at this point, further political instability and prolonged Itexit speculation might make it worse. Besides, after the ECB expanded its stimulus package for the Eurozone’s economy, the regulator refused to bail out Monte Paschi last week, without providing any commentary.

The Italian populist Five Start Movement, the ultimate Itexits adepts, were quick to provide feedback and however.

“MPS can only be saved by state aid in order to avoid bail-in rules [that hurt] small savers, as happened a year ago,” Members of the European Parliament from the Five Star Movement said in a collective statement on their leader Beppe Grillo’s blog. “This is not the time to fear the European Union and a possible infraction procedure. The consequences of a disordered bail-in would be disastrous to say the least, almost apocalyptic if one considers the size of MPS.”

© AFP 2019 / ANDREAS SOLARO
Italy on Course to Break EU Rules Over Gloomy Economy Forecast
That said, a partial or full nationalisation of MPS would significantly diminish the competitiveness of the Italian economy, already ranking among the lowest in terms of GDP per person in Europe.

The ECB has repeatedly refused please to help Monte Paschi, but this time around the regulator declined to play ‘extend and pretend’. Should Monte Paschi fail to convince its investors approve the 5 bln-euro debt-to-equity swap, an inevitable nationalisation or collapse would further embolden the Five Star Movement, bringing the Itexit closer.