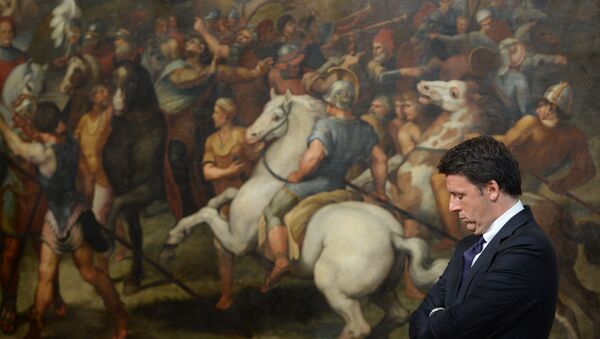 © AFP 2021 / Filippo MONTEFORTE
Subscribe
Credit ratings agency, Moody's has cut Italy's economic outlook from stable to negative, due to "slow and halting progress on economic and fiscal reform," while the country's banks continue to hang in the balance.

The insecurity in Italy follows a failed referendum on constitutional reforms and the resignation of Prime Minister Matteo Renzi. Some critics called the reforms "undemocratic," fearing Italy's central government would obtain too much power.

Those in favor of the changes, however, hoped it would bring economic and political stability.

Mr. Renzi sought constitutional changes he hoped would help fix Italy's economy. They included reducing the number of seats in the Senate and taking back control from Italy's 20 regional governments and centralizing power.

The euro fell sharply against the dollar until Mr. Renzi resigned, and with it the confidence that Italy would remain a member of the Eurozone and not succumb to a financial crisis not seen since Greece.

#Quote of the day from Italian Prime Minister Matteo Renzi, on announcing his resignation: pic.twitter.com/jHue4ImVzL

​"Italy's growth remains subdued and its growth prospects poor, and longer-term challenges to the government's fiscal strength persist," a statement from Moody's said.

"In Moody's view, the popular rejection of constitutional reform in Sunday's referendum poses a further threat to the achievement of these reforms, raising the risk of accelerating a weakening of Italy's credit profile."

Unemployment in Italy among its young people stands at around 40 percent with the country's four banks, Banca Etruria, Cassa di Risparmio di Ferrara, Banca della Marche and CariChieti all had to be bailed out by the government in 2015.

​But questions remain whether Europe will be willing to back a bailout of Italy's banks or what the rejection of Matteo Renzi's reforms will mean for the Mediterranean country, leaning ever closer towards anti-establishment, anti-euro and populist political parties.