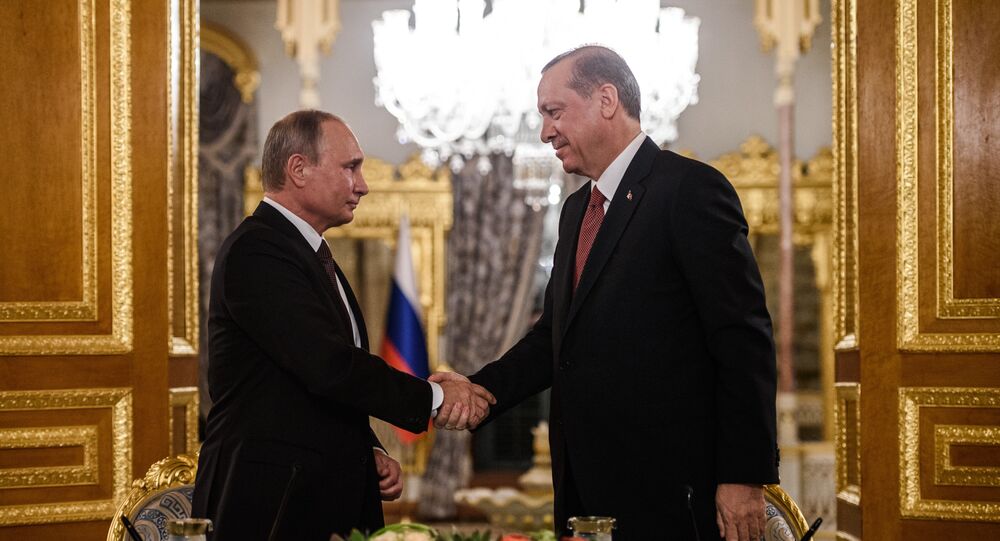 Russia and Turkey will build the Turkish Stream gas pipeline. The new pipeline will allow Russian gas to be delivered to Europe bypassing Ukraine. The deal came as a setback for Washington which has long opposed the initiative.

The energy ministers of the two countries signed an intergovernmental agreement on the construction of a new pipeline at the World Energy Congress in Istanbul.

Russia's Gazprom and Turkey's Botas signed a memorandum of understanding for the construction of Turkish Stream in December 2014. The new pipeline is planned to have a capacity of 63 billion cubic meters. It will run via the Black Sea from Russia to Turkey and continue to a hub on the Turkish-Greek border.

© Photo : turkstream.info
Russia's Gazprom, Turkey's Botas Can Involve Third Parties in Turkish Stream Pipeline
Turkish Stream is sometimes considered a successor to the South Stream pipeline which was suspended due to tensions over the Ukrainian crisis.

Gazprom CEO Alexei Miller said that two pipes of Turkish Stream will be built. The first leg is expected to be completed by 2019.

The new pipeline, along with Nord Stream 2, will allow Russian natural gas to be delivered to Europe, bypassing Ukraine, an article in Deutsche Wirtschafts Nachrichten read. Turkish Stream will also turn Turkey into a regional "gas and energy hub."

This will end up in deep economic integration between Russia, Turkey and the European Union.

"As a result, Russia’s share in the European gas market will increase. This is a setback for Washington," the article read.

In recent years, the US has tried to undermine the project. Washington wants to rival Russia in Europe with American shale gas. The US planned to use Kiev to control supplies of Russian gas to Europe, but the situation has now changed.

© AFP 2020 / ADEM ALTAN
This is Why Europe Cannot Decrease its 'Addiction' to Russian Gas Supplies
Hungary and Greece are already working with Russia on Turkish Stream.

"An interesting fact. Both Hungary and Greece have been outsiders in the European Union over the recent months. The fact that the two countries are involved in the Russian pipeline project may accelerate centrifugal forces within the bloc," the author wrote.

Turkish Stream will also weaken the positions of Poland which is well-known for its anti-Russia and pro-American policy. Recently, a Polish regulator blocked the construction of the Nord Stream 2 pipeline. When Turkish Stream is built, Poland will not be considered as an alternative route for Russian gas supplies to Europe, according to the article.