The Federal Reserve is leaving rates unchanged until after the election, even though concerns over the economy overheating and other fundamentals have long suggested a hike in rates is necessary.

Kristian Rouz – After the Federal Open Market Committee (FOMC) two-day policy meeting ended, the regulator announced that rates will remain unchanged for the time being, with a hike still possible this year. 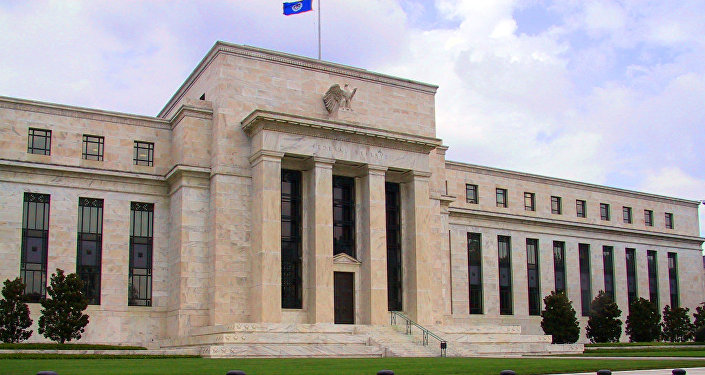 © Photo : Wikipedia/Dan Smith
US Federal Reserve to Focus Supervision on Big Banks After Wells Fargo Abuses
Amid mounting pressure to increase borrowing costs stemming from the concern of asset bubbles possibly forming as a consequence of the prolonged period of ultra-loose monetary conditions, Fed Chair Janet Yellen reiterated the regulator’s commitment to data monitoring, and as inflation and growth are still underperforming, the case for a hike, although strengthened, is still not compelling enough for a major policy decision.

Amid the internal division in opinions and assessments of the economy and the necessity of policy action, the FOMC left rates unchanged after their September policy meeting. Even though the stock market has far outperformed the real economy, growing at about 1pc year-on-year, the still weak gains in core prices index prevented the Fed from increasing borrowing costs.

“Near-term risks to the economic outlook appear roughly balanced,” the FOMC said in a statement as the two-day meeting in Washington concluded on Wednesday. “The Committee judges that the case for an increase in the federal funds rate has strengthened but decided, for the time being, to wait for further evidence of continued progress toward its objectives.” 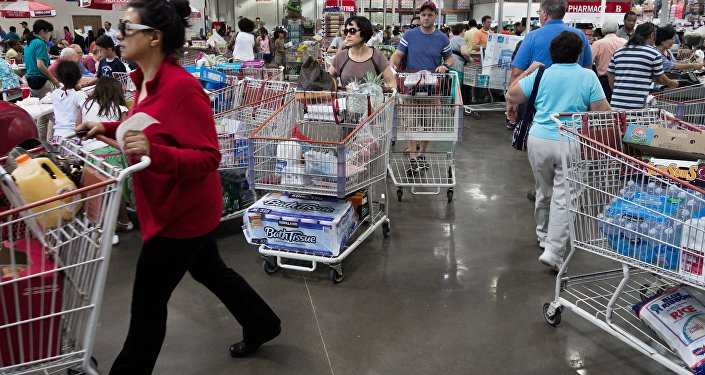 © AFP 2019 / PAUL J. RICHARDS
US Consumer Spending Beats Estimates, Unsupportive to GDP and Inflation
Inflation is still below the 2 percent target, even though the labor market is near full employment at roughly 5 percent. There are two possible reasons for such a paradox, the first being stickiness in wages and salaries preventing substantial gains in personal and household consumption that drive prices. Second, the labor market figures might not adequately reflect the employment situation, with labor participation rate at its lowest since the 1960s, whilst underemployment and irregular jobs being increasingly prominent.

The dollar’s strength is another consideration, rendering imports cheaper and undermining domestic US inflation.

The Fed are also experiencing an internal divide, with at least three regional Fed bank Presidents, Esther George, Loretta Mester and Eric Rosengren, having explicitly stated a September hike was an urgent necessity. A concern over asset bubbles forming in the economy might be their main motivation.

Yellen, however, addressed the bubble issue only briefly.

“Of course we are worried that bubbles will form in the economy and we routinely monitor asset valuations … and commercial real estate valuations are high,” Yellen said. “we have issued supervisory guidance to make sure underwriting is strong on these loans and … to make sure that (larger banks) hold sufficient capital. And of course, I think the soundness and state of the banking system has improved substantially, but of course we are focused on such things.”

At this point, the majority of market participants and observers are expecting a Fed hike in December, after the election, and the speculation is brewing the Fed’s policy decision-making is motivated by political considerations. Previously, the GOP presidential nominee alleged the Fed protracts on rate hike to pose the outgoing Obama administration in a better light in the public eye.

Back in August 2015, Trump warned of the low interest rates fueling possible asset bubbles, having expressed a favorable view of Paul Volcker, the Fed Chair in late 1970s-early 1980s, who famously hiked Fed rates up to 20 percent in mid-1981.

Yellen responded after the September meeting, having remarked that “in order to insulate monetary policy from short-term political pressures and I can say, emphatically that partisan politics plays no role in our decisions about the appropriate stance of monetary policy.”

Still, with any policy moves unlikely until after the upcoming US election, the regulator is left in an ambiguous position, amid the rising concern of monetary policy efficiency and Fed credibility.