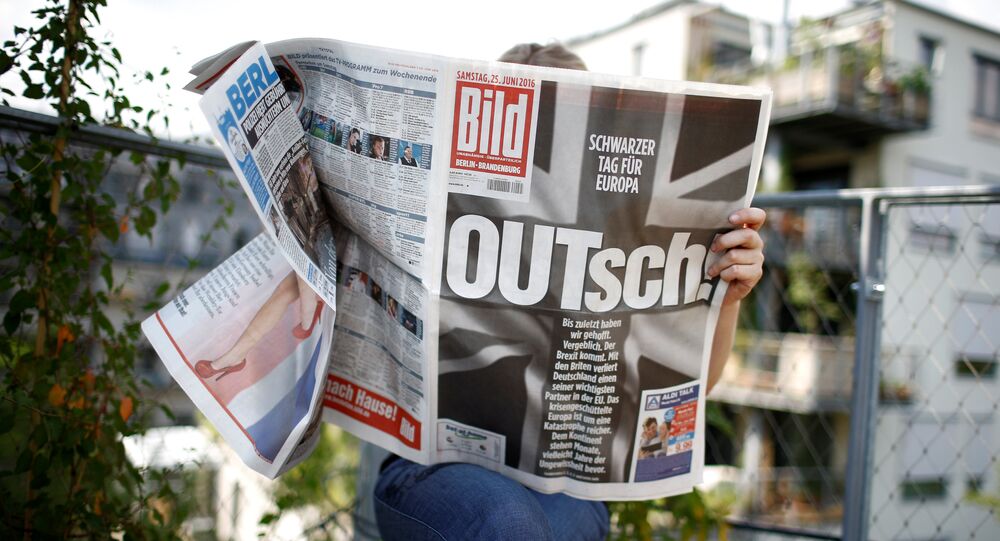 Brexit has taken its toll on economies on both sides of the English Channel, with anxiety affecting exports and manufacturing in Germany, coupled with limited gains in the Eurozone.

Kristian Rouz – Amid post-Brexit uncertainty, which has already stirred controversy over the UK’s economic prospects in the mid-to-long-term, market participants and observers are gradually losing confidence of the state of affairs on the other end of the deal.

© REUTERS / Jon Nazca
Brexit to Insignificantly Slow Growth of German Economy
Germany, continental Europe’s economic powerhouse and the driving force behind the European integration project, is facing downward economic pressures due to the insufficiency of the European Central Bank’s (ECB) monetary policy response, international headwinds, and challenges to the export market for its manufactured goods. However, the bloc's overall economic capacity remains resilient.

According to a report by the research institute ZEW, economic expectations in Germany dropped by a larger-than-expected 2.5 points to 55.1 points. Readings above 50 still indicate expansion in this case; however, the prospects of the Eurozone as a whole look brighter than those in Germany, with the Eurozone gaining 0.8 points in a separate estimate, yielding a reading of 5.4 points (where numbers above zero indicate positive expectations).

Confidence in the Eurozone, however, is still weak amid negative investor sentiment in France and Italy, which are struggling to balance their respective economies amid slow growth and a technical recession. In Germany, the ZEW Index reading was below 50, at 49.8, in July – immediately after Brexit, with recession fears rife at that point. Nonetheless, the Brexit shocks turned out to be of less immediate significance on both shores of the North Sea.

"The fact that ZEW investor sentiment was unchanged in September despite easing fears about the effects of Brexit adds to signs that underlying growth in the German economy is set to slow," Jennifer McKeown of Capital Economics said. "It is worrying that sentiment has not recovered as worries about the effects of Brexit have eased and the ZEW suggests that the soft tone of recent Ifo surveys may be giving a better steer on economic developments than the more upbeat German PMIs."

Subsequently, the ECB might enact a broader stimulus package, cutting interest rates deeper into negative territory and widening their bond-buying program, however, there is a broad concern in the markets that monetary policies might have reached the limits of their capacity for stimulus.

© REUTERS / Wolfgang Rattay
Worse to Worse: ECB Preparing for Brexit Scenario as Banks Crumble
German officials are, however, opposed to a further expansion of ECB stimulus, as Northern Europe has a long-standing reputation of having an unfavorable view of debt-fueled growth models. Even though Italy and France are facing substantial challenges, the German opposition to further stimulus might result in the ECB failing to take action, and a possible subsequent separation of Italy from the bloc.

"Instead of new and always more extreme measures, we need a little patience," ECB Executive Board member Sabine Lautenschlaeger said. "We will therefore need to be patient for a while before being able to make a final assessment of the purchase program… I see no reason at the moment to change the key design elements of the purchase program."

The German economy, despite mounting investor concern, continues to expand, as evidenced by  steadily advancing payrolls and hiring. With exports still benefitting from the weaker euro, robust domestic consumption is driving the German GDP.

"A slightly disappointing headline, given the modest increase in equity prices over the survey period, and risks are tilted to the downside next month, given the very recent rise in volatility," Claus Vistesen of Pantheon Macroeconomics said. "Overall, the survey is telling a story of investor skepticism despite the solid rebound in German and EZ equity indices since the end of June."

The contradictory macroeconomic reports coming from continental Europe suggest a greater degree of uncertainty over the medium-term. German exports to non-EU countries have been underperforming recently, but the overall situation is still rather favorable. However, the pace of economic expansion is insufficient, meaning the Eurozone will require new sources of growth in the mid-to-long-term.