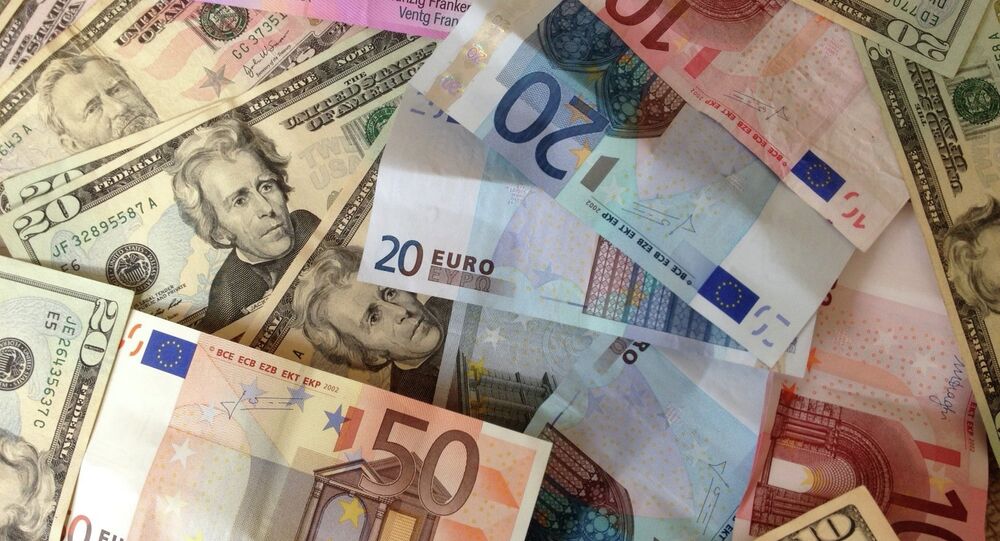 Declining profits of corporate sectors in the US and Europe, expected in the January-March period, might indicate a broader economic turmoil advancing, and whilst investors are seeking short-term revenues in emerging markets and rebounding commodities, a subsequent global meltdown could excel the horrors of 2008.

Kristian Rouz — Earnings season is starting in the US and across the EU, with the first portions of data providing a murky outlook on economic conditions, effectively rendering investors jumpy over the stock market's performance. Subsequently, oil prices rose above $43/bbl, providing a minor boost to energy sectors on both side of the Atlantic, yet the disinvestment in North America's shale projects resulting in shale oil output hitting its two-year lowest was the main reason behind advances in crude prices. While emerging markets might rebound slightly in the short-term amidst the rising concern in Ney York and London, an anticipated full-blown economic downturn in the US is likely to result in a global recession eventually.

© AP Photo / Jin Lee
The Brink of Recession? $29 Trln in Corporate Debt Weighs as Earnings Fade
European enterprises commenced reporting their earnings for the January through March quarter, posting disappointing sales figures and weak overall profits as global demand has slowed dramatically, whilst their competitiveness in international trade was severely bettered by the past year's wave of devaluations across emerging markets. Even though the euro depreciated as well, it failed to propel the global consumption of European goods and services to comfortable levels.

The French luxury brand LVMH posted lackluster profits data, whilst most Italian banks reported excessive volumes of uncollectable accounts hitting their earnings. Even the Italian government's plan to establish a $5 bln fund aimed at resolving the debt issue, along with a yet another round of loan restructuring has failed to make the overall situation any better.

In raw materials and primary processing, the metals enterprise Alcoa posted a decline in profits as well.

"LVMH's numbers were not that good, and the problem with the Italian bank fund is that it is not big enough and it risks compromising the banks that are already in a much better shape," Francois Savary of investment company Prime Partners in Geneva said.

United States Q1 earnings season is about to start amidst gloomy expectations. Investors are expecting a massive decline in earnings, potentially exceeding the losses of the past quarter. The largest declines are anticipated in energy sector and raw materials, stemming from the persistently low prices for crude oil and commodities. However, more recently, US financial enterprises have become increasingly vulnerable due to weaker activity and a decline in their scale of international operation. US manufacturing, albeit rebounding from a minor recession within the sector, is not in its best shape as well: capital-intensive industries have taken a blow from the dollar's strength and, again, slowing international demand.

"For Q1 2016, the estimated earnings decline is —9.1%," John Butters of FactSet said. "If the index reports a decline in earnings for Q1, it will mark the first time the index has seen four consecutive quarters of year-over-year declines in earnings since Q4 2008 through Q3 2009."

According to FactSet estimates, US corporate earnings will decline across all sectors except telecoms (anticipated gains of 13.2%), consumer discretionary (+10.0%), and healthcare (+2.5%). Utilities, consumer staples, tech, and the four aforementioned sectors are project to post declines, dealing the broader S&P 500-listed corporate sector a blow of 9.1% of its value in losses.

Indeed, US oil production is struggling amidst disinvestment, stirred by low oil prices. According to US Energy Information Administration (EIA) estimates, US oil output will have fallen to 4.84 mln bpd by May, to its lowest since July 2014. Shale oil output reached its pinnacle in March 2015 at 5.5 mln bpd, and has by now shrunk to 5.0 mln bpd.

"Oil prices holding above $40 a barrel overnight has got the dollar on the back foot, more than anything else, so we have the yen and the dollar at the bottom, and everything else at the top," Kit Juckes of Societe Generale in London said.

The dollar has been retreating for several weeks amidst concerns of a recession in the US and the Federal Reserve's cautious policy stance. The dollar's decline pushed commodity prices higher, prompting a minor revival in emerging markets as oil prices stabilized above $40/bbl. Eventually, the Russian rouble, the Swedish krona, and the Australian dollar topped the list of best-performing currencies, reflecting a short-term influx of capital in emerging markets.

Whilst emerging market economies, heavily indebted in dollars, might be feeling some relief, the economic stall in Japan and the Eurozone, as well as the dramatic US slowdown, threatening to exacerbate into a recession, would have a devastating effect to the global economy reminiscent of the 2008 meltdown.