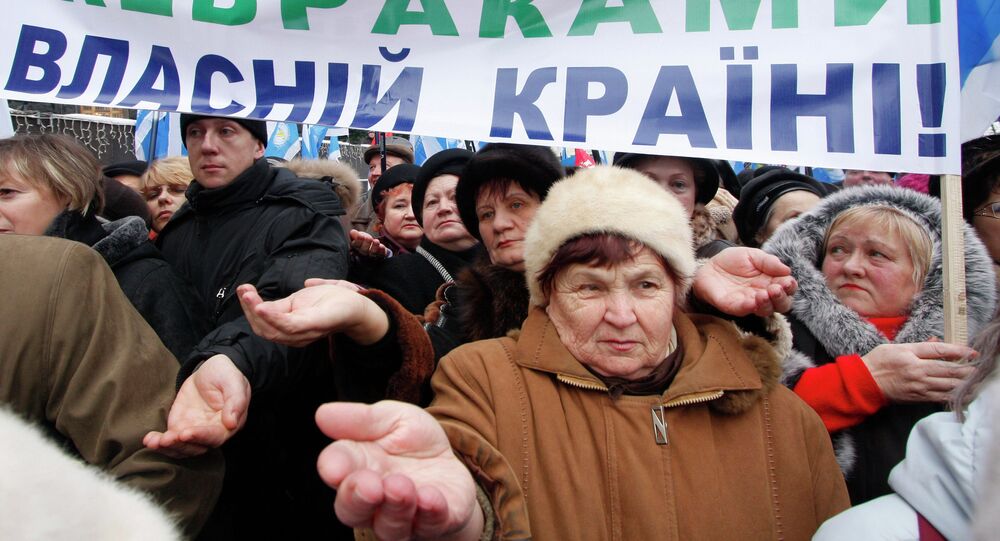 Over the past 24 years, Ukraine’s real GDP has decreased by 35 percent, which is absolutely the worst in the world, according to World Bank data, Ukrainian newspaper Zerkalo Nedeli (ZN) reported.

As Ukraine is celebrating its independence day, economists should be worried, as the country's economy has fallen to the point of no return.

Amusingly, back in 1987 Ukraine's GDP was only 4 times smaller than that of China. In early 2015, it was already 80 times smaller, and the reason behind it was not solely due to China's economic growth over the past two decades, ZN said.

© Sputnik / Alexandr Demyanchuk
Where’s My Money? Half of Ukraine’s GDP Lost Due to Underground Economy
One can somehow comprehend how and why the Central African Republic and Zimbabwe appeared on the list, but the fact that even these two countries are ahead of Ukraine should frighten Kiev politicians.

This horrible turn of events isn't the result of a Civil War in Donbass. The process started much earlier, when Ukraine lost a large part of its domestic production. During the first decade of its independence, Ukraine lost almost 60 percent of its GDP, which was twice as much as the United States did during the Great Depression in the 1930s, ZN said.

The main reason behind the collapse of the Ukrainian economy is technological degradation, as a result of which the country ended up being dependent on the export of natural resources and the fluctuation of the dollar and the euro.