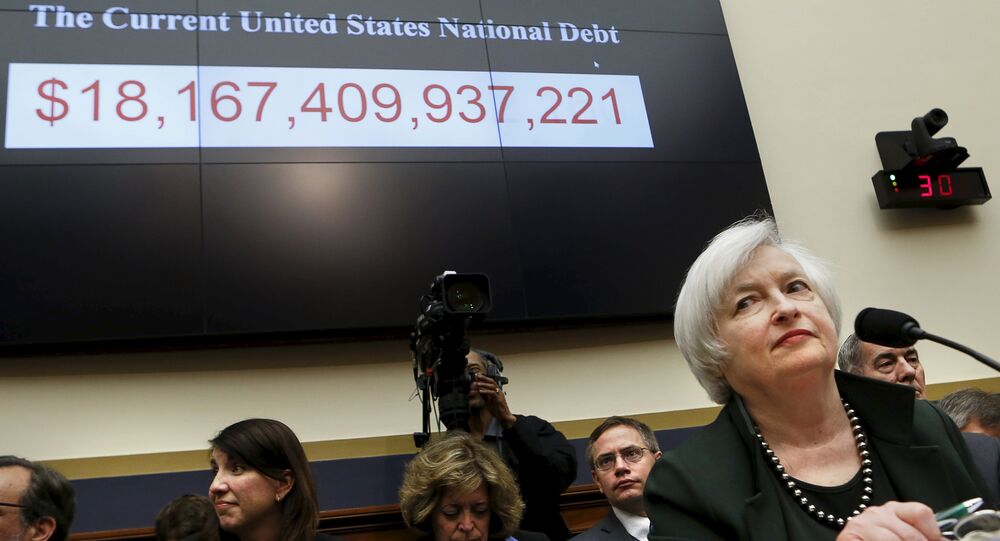 On Friday, the US Fed admitted to have mistakenly released its rate hike projections, surprisingly modest and suggesting the regulator is aware of a less optimistic situation in the US and global economy.

Kristian Rouz — On Friday, the US Federal Reserve accidentally released its confidential staff-only projections for this year's planned increase in US borrowing costs, which turned out to be much more modest than previously speculated. The leak, besides stirring concern on Capitol Hill over the information security of the regulator's internal communications, also had a short-lived market effect, with yields on US Treasuries briefly dropping.

The US Fed said on Friday its confidential Federal Open Market Committee (FOMC) meeting of 16-17 June were published by mistake on 29 June. Such documents are usually disclosed to the public five years after the original date of event, along with the FOMC meetings transcripts.

© Flickr / AFGE
Bernie Sanders Says It's Time to Do Something About Minimum Wage
The rate hike projections as outlined in the leaked document are seen at 0.35% in federal borrowing costs somewhere in Q4, up from the current 0-0.25%. Despite the Fed insisting the figures do not represent the policy makers' viewpoint, the disclosure if effectively putting into question the September hike itself. The scale of the hike is also far below the anticipated rise in benchmark interest rate to some 0.625% by the year's end.

That said, the Fed, being aware of the mediocre growth in the US economy, and the sluggish global economic expansion, might be planning only a very symbolic tightening in its monetary policies, wary of its imminent negative effects of a hike for the US economy.

The leak does not present enough information on whether the rise in borrowing costs to 0.35% will represent only a quarterly rate increase, or there are actually two successive hikes planned by the year's end. While the lending rate of 0.35% is a possibility for Q3, a second hike is possible in December.

The Fed leak triggered a short-lived rally in US Treasuries value, with yield on the two-year security fallen 0.02% to 0.66% on Friday, only to rebound later during the day to 0.68%.

© REUTERS / Gary Cameron/Files
US Biggest Banks to Hold More Capital to Protect Against Collapse
Such papers as the one leaked are usually compiled by the US Fed staff economists prior to policy meetings based on the across-the-board evaluation of the US and global economic environment. Commodities prices, durable goods market, inflation estimates, GDP projections, labour market and various sectors of the real economy are all taken into account. That said, such a modest increase in the lending rate suggests the Fed staff is not very optimistic of the US and global economic outlook, at least, till the end of this year.

As there is still little clarity regarding US economic performance in the coming months and the Fed's subsequent actions, the Fed leak does not change much in the market situation. Less clarity means higher demand for safer assets, and that is where the Treasuries bulls are reaping benefits. The US dollar is also on a winning streak until the Fed announces their exact date of a rise in borrowing costs.