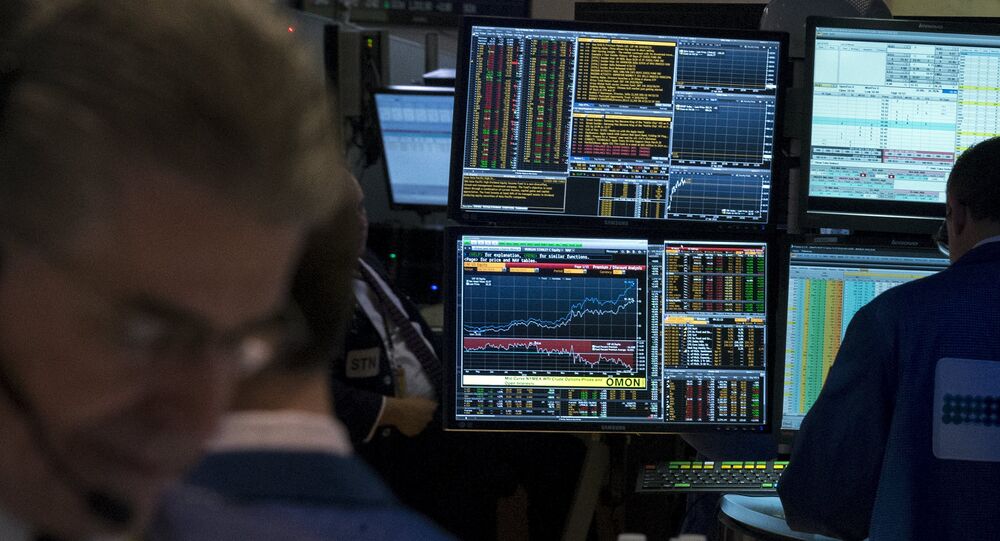 Amidst the anticipation of monetary tightening blurring, the US stock market has continued its winning streak, extending its all-time highs, a hint at a possible 1929 situation.

Kristian Rouz – Monday’s trading on Wall Street ended in a buoyant rally with financials gaining on the rebound in the fixed-income market, and tech shares advancing driven by speculation of a coming buyback in Apple shares.

© REUTERS / Yuri Gripas
US 'Fortune 500' Companies Unwilling to Invest in American Society - Obama
Investors and traders are still wary of betting on either a bull or bear market due to the US Fed’s policy outlook still being hazy, however, as an interest hike is likely not happening before September, the abundance of cheap money is a main driving force behind stocks.

The US stock market posted fresh historic highs on Monday after Carl Icahn commented on a possible Apple Inc. stock buyback. Higher bond yields attracted investment money in fixed-income, creating a unique situation of a rebound in bonds valuation, while yield remaining still high. Banks and other financials capitalized on the occasion, and the US dollar also rose.

"It's becoming more of the collective thought that the Fed can wait, because you really don't see any blistering growth," Kurt Brunner of the Philadelphia-based Swarthmore Group said.

The Nasdaq Composite Index also gained, up 0.6%. Trading volumes were slim with some 5.4 bln equities bought and sold, 16% below the 3-mothe average measure.

The rally in US stocks is also supported by the recent weakness in macro data, with America’s multinational enterprises having improved profit outlooks amidst a weaker dollar. The common sentient that the Fed would wait longer before hiking its base interest rate is also a supportive factor for the markets. At the same time, volatility in US stocks increased amidst higher fixed-income yields, rendering risky operations and assets more profitable for the time being, and markets participants seem to be ready to take on such a risk thus far.

© Flickr / nikzane
US Growth Stalls at 0.2% in Q1, Weighing on Stock Futures
The greenback, however, rallied against its major peers during Monday’s trading. A stronger dollar is a bad sign following a string of weak data. Corporate profits might be hurt, and imports becoming more appealing to consumers. US inflation is weak though, meaning consumers market is rather comatose.

President of Chicago Federal Reserve Bank Charles Evans, known as one of the Fed’s most dovish policy-makers, spoke out on Monday, suggesting a hike is interest should not advent until early 2016. However, he said, such a hike could still occur as early as in June, only adding to the widespread uncertainty regarding America’s monetary policies.

America’s stock and fixed-income markets are now in the midst of a volatile situation, bearing significant risks of a dramatic collapse. The ratio of companies’ market value by their assets’ replacement cost is at its highest than during the ‘dotcom crash’ of the year 2000 and the ‘black Tuesday’ of 24 October 1929.

The Largest US enterprises are less reliant on physical assets at this point than any time before, extracting most of their profits out of brands, trademarks, technology and other intellectual property. In other words, huge part of the US economy is a virtual reality with money made out of thin air, and it is more so these days than anytime in the US history. The full value of the US enterprises’ non-physical assets is unknown, which is a disturbing fact itself.

Market participants are now abstaining from betting explicitly bearish or bullish. One the one hand, the abundance of money in the market and rather strong corporate performance suggest more buying bets, however, a lot of policy uncertainty, a possibility of the stocks being overvalued are holding down the bull market. The sentiment is there is not enough real economy backing for the ‘not cheap’ US shares.

Crude oil slid with Brent selling at $66.27/bbl, and US futures settling at $59.43/bbl. Factors behind the decline in oil price are a stronger dollar and reports of Saudi Arabia having posted its highest oil exports in about a decade.