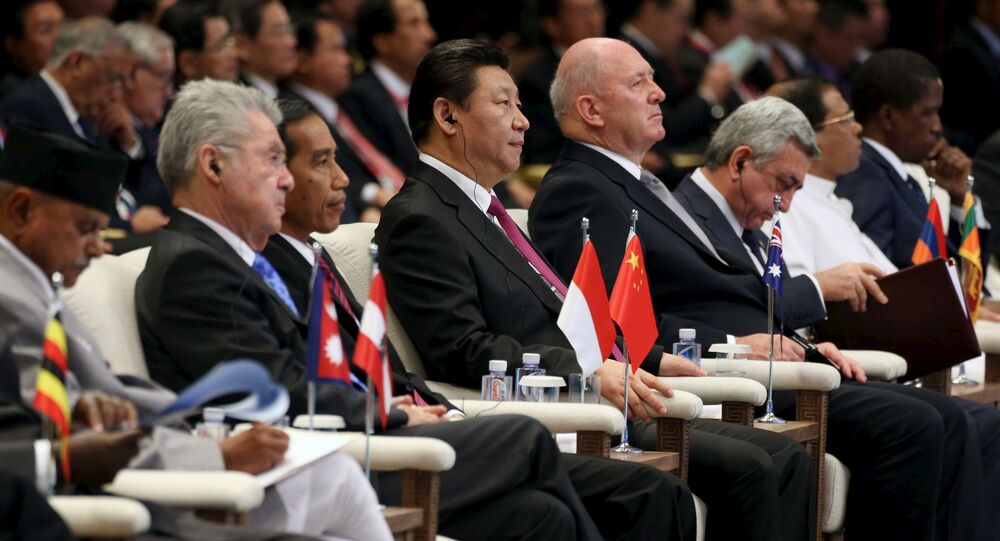 The growth was shown first of all by the companies linked to the new China's Road Silk economic project, especially the companies dealing with the construction of the infrastructure and investment, according to Ma Baoli, a financial analyst with Beijing Securities Net.

© Sputnik / Mikhail Mettsel
Heads of Russia, China to Discuss Silk Road Economic Belt in May
MOSCOW (Sputnik) — Both of the main Chinese stock exchanges in Shanghai and Shenzhen recorded growth on Monday, as indexes approached levels unseen since the beginning of the 2008 global economic downturn, following the release of fresh details regarding the proposed Silk Road Economic Belt over the weekend.

"The growth was shown first of all by the companies linked to the new Silk Road project, especially the companies dealing with the construction of the infrastructure and investment. After the plan was unveiled, a number of clients who wanted to open an account increased," Ma Baoli, a financial analyst with Beijing Securities Net, told Sputnik Monday.

© Sputnik / Sergey Guneev
Boosting Bilateral Ties: Russia Vows to Join Chinese-led Development Bank
The Silk Road Economic Belt will to be complimented by the 21st-Century Maritime Silk Road, connecting China with Europe via the Indian Ocean, while facilitating trade and cooperation with the South Pacific region.

Over 60 countries along the routes have shown interest in taking part in the development of the Belt and the Road, according to Chinese President Xi Jinping.

The Chinese President also said that he hoped the annual trade between China and other Silk Road countries would exceed $2.5 trillion within a decade.

The Silk Road Economic Belt was high on the agenda of the Boao Forum For Asia, which concluded on the Chinese island of Hainan last week.

Russia was represented by First Deputy Prime Minister Igor Shuvalov, who said Russia would cooperate with China and other countries on the construction of the Silk Road Economic Belt.

According to the deputy prime minister, talks on the project will be held May and June, during the St. Petersburg International Economic Forum.

Shuvalov added that the project will undoubtedly create new investment opportunities for Russia.

The Silk Road Economic Belt comprises multiple energy and infrastructure projects, including the construction of new railroads, highways and industrial parks, in the coming years.

liondw
China's Maritime 'Silk Road' Praised by Overseas Experts, Backed by More Than 50 States
The Silk Road was initiated by Chinese President Xi Jinping in 2013 to boost cooperation between China and Central Asia. Hundred of Silk Road-related projects are due to be implemented in several regional states, including Kazakhstan, Kyrgyzstan, Tajikistan and Pakistan.

In October 2014, 21 Asian countries, including China, India and Kazakhstan signed an agreement to establish the AIIB with a registered capital of up to $100 billion. They were later joined by a number of Europe's largest economies, including Germany, France and the United Kingdom.