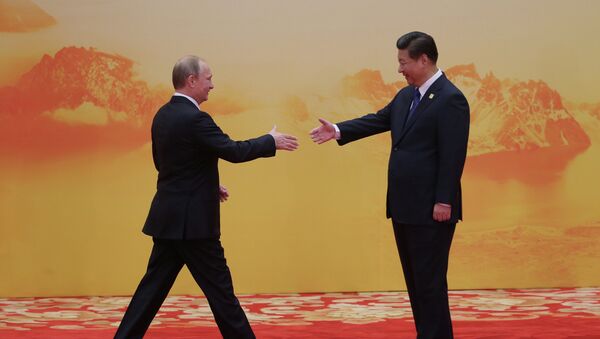 © Sputnik / Mikhail Mettsel
/
Go to the photo bank
Subscribe
Russian First Deputy Prime Minister Igor Shuvalov said that the prospects of Russia-China cooperation in the implementation of the Silk Road Economic Belt project will be discussed by the heads of the two countries during a visit of Chinese President Xi Jinping to Moscow in May.

MOSCOW (Sputnik) – The prospects of Russia-China cooperation in the implementation of the Silk Road Economic Belt project will be discussed by the heads of the two countries during a visit of Chinese President Xi Jinping to Moscow in May, Russian First Deputy Prime Minister Igor Shuvalov has announced.

"We announced this [plan] today and said that we will cooperate with China and other countries on the construction of the Silk Road Economic Belt," Shuvalov said in a Saturday interview with the Russian Rossiya 24 TV channel, adding that the project will undoubtedly create new investment opportunities for Russia.

According to the deputy prime minister, talks on the project will be held in May and in June, during the St. Petersburg International Economic Forum.

"This format is suggested to be discussed on the political level, and our leaders will definitely discuss this topic on May 8, in Moscow," Shuvalov said.

Russia Welcomes China’s Silk Road Economic Belt Initiative
The Silk Road Economic Belt stipulates the implementation of multiple energy and infrastructure projects in various countries, including the construction of new railroads, highways and industrial parks that will start in the coming years. This will facilitate the flow of goods from the East to the West on preferential terms.

"All counties willing to participate could be included, they are being included in this cooperation so that a variety of infrastructure and economic possibilities are created for the participants of the business project," Shuvalov said, adding that the Silk Road Economic Belt will create new opportunities together with the Eurasian Economic Union (EEU).

The EEU is an international organization aimed at regional economic integration. The union facilitates the free movement of goods, services, capital and labour on the territories of its member states.

The Silk Road Economic Belt project was initiated by Chinese President Xi Jinping in 2013 seeking to boost cooperation between China and Central Asia. The Silk Road projects, numbering in the hundreds, will be implemented in several regional states, including Kazakhstan, Kyrgyzstan, Tajikistan and Pakistan.