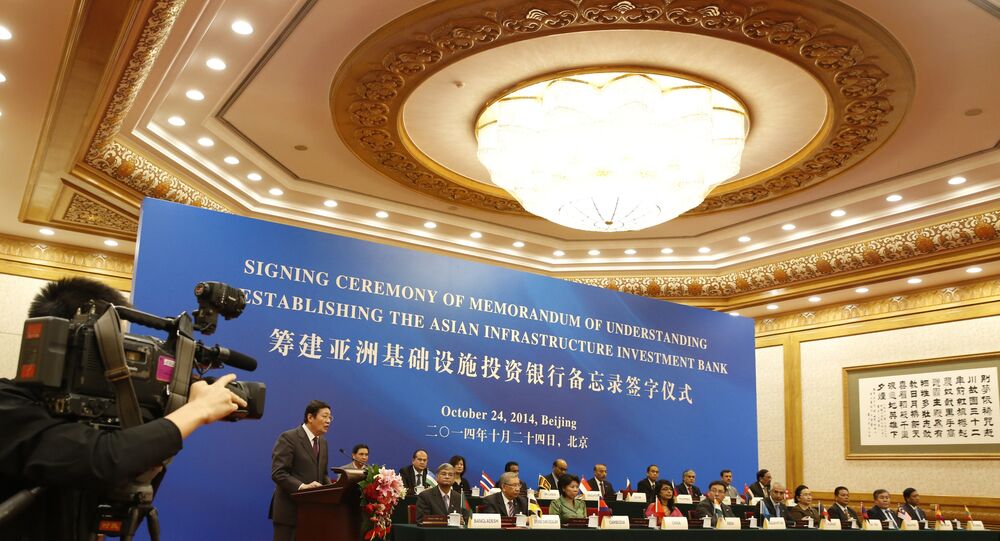 The United States administration made a major mistake in its opposition to the Chinese Asian Infrastructure Investment Bank (AIIB), according to Paul Haenle, director of the Carnegie-Tsinghua Center in Beijing.

© REUTERS / Takaki Yajima
IMF Welcomes China-Led Asian Infrastructure Investment Bank
MOSCOW (Sputnik) — With less than two weeks before the deadline for accepting founding members to the Asian Infrastructure Investment Bank (AIIB) it is already clear that Washington has failed to prevent many of its long-term allies in Europe and Asia from joining the China-led venture.

The AIIB is an international financial institution proposed by China and aims to invest in infrastructure projects in the Asia-Pacific region. The bill establishing the bank was signed by 21 countries in October 2014. March 31, 2015 has been set as the deadline for accepting founding members to the AIIB.

New Zealand became the very first non-regional member to join the bank in late November, 2014 and the United Kingdom – the first European state to announce its decision to join last week.

On Tuesday, Germany, France and Italy announced they would follow Britain and join the AIIB. Luxemburg and Switzerland announced similar intentions on Thursday and Friday respectively. Officials in Australia and Japan have also said that they are not ruling out joining the bank.

© Flickr / Holly Golabek
Europe Gets ‘Foot in The Door’ in Asia by Joining AIIB
Experts questioned by Western media believe that Washington took the wrong stance from the very beginning — by choosing to oppose the creation of a new financial institution instead of joining it so as to secure itself a role in future Asia-Pacific megaprojects.

“The [US] administration made a major mistake in its opposition… The bank was going to go ahead whether we supported it or not,” Paul Haenle, director of the Carnegie-Tsinghua Center in Beijing, told the New York Times.

David Sedney, a senior fellow at the Atlantic Council and former senior State Department official told the Washington Post that putting pressure on US allies not to join the project was another major mistake made by Washington.

In a commentary titled “Washington, what are you waiting for?” the Chinese Xinhua news agency welcomed the new European members to AIIB and referred to Washington’s position on the Asian bank as “petulant and cynical.”

© AFP 2020 / Takaki Yajima /POOL
Luxembourg Seeks Membership in Asian Infrastructure Investment Bank
Xinhua said that “the brave yet rational” decision by European countries to join “sends clear signals to the whole world, and particularly to the United States, who is trying to forge an anti-AIIB front within its allies.”

The news agency also said that as more and more European countries join the bank, the United States “will feel lonelier” – and stressed that the project remains open for all interested parties including Washington.

Together with the BRICS New Development Bank, the AIIB is seen as an alternative to Western-led financial institutions such as the World Bank and the International Monetary Fund. In October, 2014 US State Department spokeswoman Jen Psaki said citing Secretary of State John Kerry that Washington welcomes the idea of creating an Asia development bank but urges for it to “meet international standards of governance and transparency.”