Russian Energy Minister Alexander Novak said that Ukraine made no progress in settling gas debt to Gazprom. Ukrainian side still considers the Gazprom's letter demanding to repay the debt.

"No progress has been made. As you know, Gazprom has sent a letter demanding repayment of the debt and it is still being considered by the Ukrainian side," Novak told journalists during his visit to Hungary.

Kiev's massive gas debt, exceeding $5 billion at the time, forced Moscow to suspend gas deliveries to Ukraine for nearly six months in 2014. Deliveries resumed on December 9 under the so-called winter package deal, mediated by the European Union and signed by Russia's Gazprom and Ukraine's Naftogaz.

In January, Gazprom head Alexei Miller stated that the company had sent Kiev a letter regarding its outstanding debt.

Despite the slump in global oil prices, the Russian gas price for Ukraine may still grow in April because the sides are yet to agree on a discount, Russian Energy Minister Alexander Novak said Tuesday.

"It [the price of Russian gas] is unlikely to be less than in the first quarter [of 2015], when discounts were still in force," he said. "The issue [of a discount] has not been settled to date."

The current contract between Moscow and Kiev ties the price of gas for Ukraine to global oil prices, which have been falling in recent months.

In summer 2014, Russia's energy giant Gazprom suspended gas deliveries to Ukraine over Kiev's debt, which at that time exceeded $5 billion. Deliveries resumed in December, under the so-called winter package deal, after Kiev began to pay off its debt.

Russia has granted Ukraine a temporary discount of $100 per 1,000 cubic meters under the winter package, which expires on April 1, 2015. In December, Novak said that Moscow is ready to consider a request for a new discount, but so far Ukrainian authorities have not asked for it.

On February 15, Ukrainian Prime Minister Arseniy Yatsenyuk said that the country should reduce its consumption of Russian gas to zero. According to Yatsenyuk, in 2014 Ukraine purchased 33 percent of the gas it consumed from Russia, which was three times less than in the previous year. 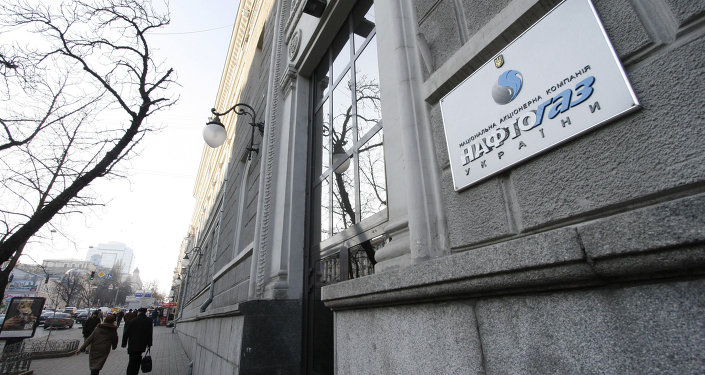 “Theoretically, everything is possible. In my opinion, the talks should continue,” Novak told journalists.

Last month, Naftogaz turned to an arbitration court in Stockholm to demand $6.2 billion from Russian gas giant Gazprom over a contract for gas transit between 2009 and 2019. The Ukrainian company is seeking $3.2 billion in damages for the gas it allegedly has not received for transit from Gazprom, and another $3 billion in interests. Naftogaz demands that the transit tariffs on gas be changed in the contract that was signed in 2009, according to Gazprom.

After Kiev returned $3.1 billion gas debt to Russia last December, Gazprom resumed gas deliveries to Ukraine following a six-month-long break. The Russian company is supplying Ukraine with gas under the so-called winter package agreement, which stipulates that Ukraine pay for supplies in advance. The deal, mediated by the European Union, was agreed in October.