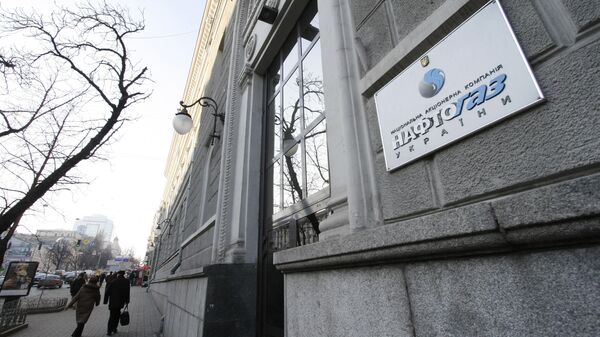 Naftogaz claims that it transferred $1.65 billion to Russia's Gazprom energy giant to cover some of the unpaid Russian gas deliveries.

KIEV, December 24 (Sputnik) – Ukraine's Naftogaz has transferred $1.65 billion to Russia's Gazprom to cover some of the unpaid Russian gas deliveries, the company has announced in a statement.

"Thus, in accordance with the agreements reached in Brussels, Naftogaz has paid $3.1 billion, in two transfers, for 11.5 billion cubic meters of gas delivered by Gazprom in November-December 2013 and in April-June 2014," the statement said.

"The first payment amounting to $1.45 billion was transferred on November 4," the statement added.

Naftogaz has also paid $378 million to Russia for the delivery of 1 billion cubic meters of gas. The payment was made earlier this month.

On Tuesday, Russian Energy Minister Alexander Novak said that Russia would not supply gas to Ukraine in January, 2015, if Kiev failed to repay $1.65 billion of its gas debt to Russia.

Russia resumed gas sales to Ukraine on December 9, after a six-month break. A temporary agreement between Moscow and Kiev, in force during the cold season, says that Ukraine must repay $3.1 billion of its $5.3-billion gas debt to Russia.