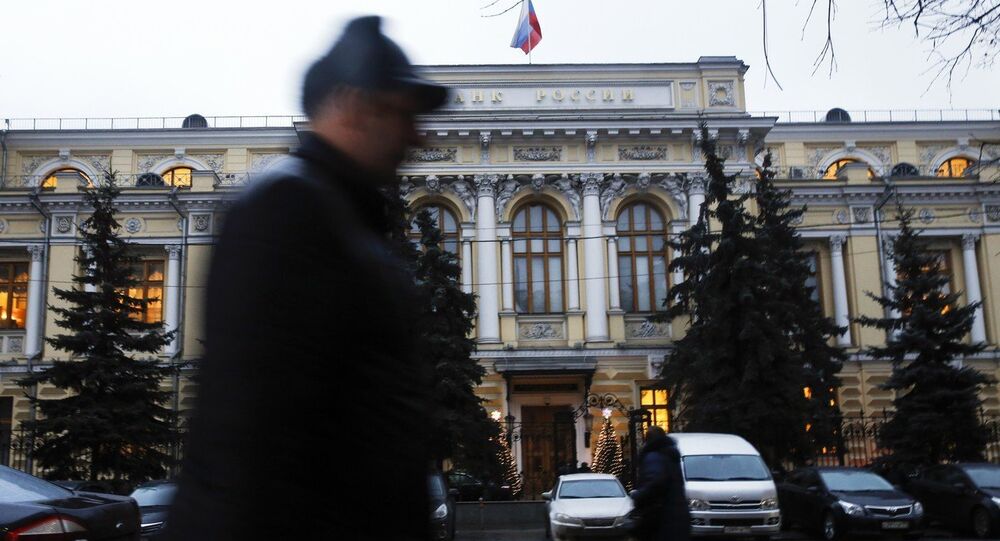 The Russian Central Bank on Friday decided to lower key interest rate from 17 percent to 15 percent following a meeting of its Board of Directors, according to a press release by the Bank.

© Sputnik / Grigory Sysoev
Deputy Prime Minister Says Ruble Float Extremely Painful But Necessary
MOSCOW, January 30 (Sputnik) — The Board of Directors of the Russian Central Bank has decided to lower interest rates from 17 percent to 15 percent, noting that the decision accounted for changes in the balance of risks, the acceleration of inflation and the cooling of the economy, the Bank announced in a press release Friday.

"The Board of Directors of the Central Bank of Russia has decided to cut its key interest rate from 17 to 15 percent per annum, accounting for changes in the balance of risks resulting from accelerating growth in consumer prices and the cooling of the economy. The decision made December 15, 2014 to sharply increase interest rates has led to the stabilization of inflationary and devaluation pressures to the extent expected by the Bank of Russia," the statement by the Bank noted.

The move came as a surprise to some experts, who expected the CBR to maintain interests at 17 percent at least until the summer, given that inflation remains high, and the ruble unstable, Russian economic news service Prime explained.

© Sputnik / Ruslan Krivobok
Central Bank Says Profits of Russian Banks to Be Lower Than $15 Bln in 2015
The CBR notes that inflation is expected to peak in the second quarter of 2015, and that the surge in inflation caused by the rapid adjustment of prices to the weakening of the ruble is a temporary phenomenon. In the medium term, conditions exist for a significant reduction in inflation, the statement by the Bank says.

"In the future, inflationary pressures will be restrained by a decrease in economic activity. According to the forecast of the Bank of Russia, the growth of consumer prices will fall below 10 percent by January 2016."

The Bank's press release adds that "the prevailing monetary conditions are creating the preconditions to reduce inflation in the medium term. The annual rate of growth of the money supply (M2) has declined significantly. Interest rates on deposits have increased significantly, which will create the conditions for an increase in the propensity to save and to stimulate the flow of funds to bank deposits. Rising interest rates on loans and banks' increasing demands [to ensure] the quality and solvency of borrowers has resulted in a slowdown in the growth of credit in the economy."

© AP Photo / Michel Euler
Structural Crisis Plagued Russian Economy Long Before Events in Ukraine
According to statistics from the Bank, inflation for 2014 amounted to 11.4 percent, with core inflation at 11.2 percent. The growth in GDP for 2014 amounted to 0.6 percent. Prime notes that the tightening of credit markets and the decline in oil prices is expected to reduce growth further in 2015, declining real wages and a slowdown in retail lending resulting in a decline in investment in fixed assets, and in lower aggregate demand. The Central Bank expects GDP to fall by up to 3.2 percent in the first half of 2015.

On December 15, the Central Bank made the largest single interest rate increase since 1998, raising the rate from 10.5 to 17 percent. The Bank noted that its decision was aimed at limiting risks of ruble depreciation and inflation. The Bank’s decision came amidst the currency's loss of nearly half of its value in December 2014, in part due to a sharp decline in oil prices. Oil price declines directly and significantly affect the Russian economy, which is heavily reliant on energy exports. After the interest rate was increased, the national currency partially stabilized.

US Federal Reserve Signals Patience as It Maintains Interest Rates