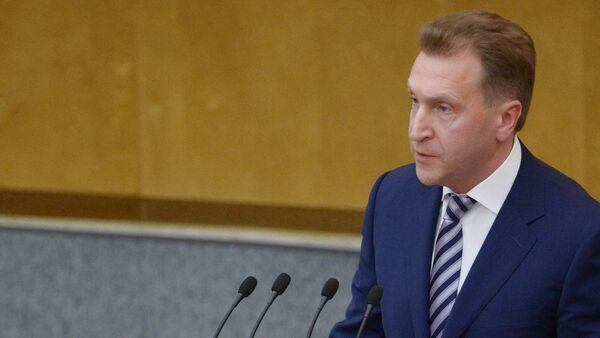 "We believe that [free floating the ruble] was done extremely painfully, but completely justified and correct," Shuvalov said during a parliamentary session.

Russia's Anti-Crisis Plan to Be Based on Current Oil Prices
The currency slumped to record lows in December, following months of economic downturn that resulted from sliding oil prices, as the Russian economy is highly dependent on oil revenues to fill its budget coffers.

At one point, the ruble was trading at 80 rubles to the dollar and 100 to the euro after losing 20 to 26 percent in a single day of trading.

"I should tell you that while we are looking at new budget realities, we take into account that there are areas that the government will not suggest cutting expenses. This is of course the country's defense capabilities and agriculture," Shuvalov said, during a parliament session.

Russia Prepares 2015 Budget Amendments Over Oil Prices at $60 Per Barrel
The government is preparing a package of amendments for the 2015 federal budget, to be unveiled in February. The new budget is expected to take effect April 1, the minister added.

"In February, we will give the parliament the package of the federal law on the budget for 2015. We will discuss it with you and we think that with our joint efforts we can finish this work in March so that both the government and the State Duma, as well as regional governments can begin working with it starting from April 1 by leaning on the new possibilities of the budget changes for 2015," he said.

Shuvalov warned that the government's new macro-economic forecast for Russia was "extremely tough."

"We need to do this work in the first quarter and will lean on the new forecast of the social-economic development, which will literally be brought before the government from the Ministry of Economic Development in two days. This forecast will be extremely tough," Shuvalov said during a parliament session.

The Russian budget relies largely on oil revenues, which slumped in the second half of 2014 due to global overproduction.

On Wednesday, the Russian finance ministry unveiled a revised anti-crisis plan envisioning deep spending cuts. The ultimate goal is to quickly offset the deficit and balance the books by 2017.