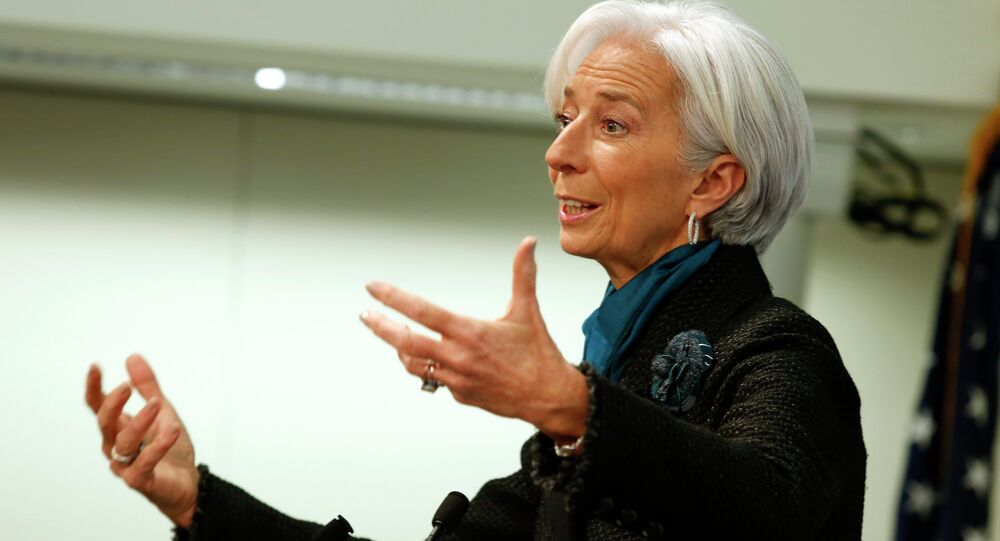 Managing Director of the International Monetary Fund said that the United States is the only major economy that will continue to show steady growth in 2015 amid an overall low global economic recovery.

WASHINGTON, January 16 (Sputnik) — The United States is the only major economy that will continue to show steady growth in 2015 amid an overall low global economic recovery, Managing Director of the International Monetary Fund (IMF) Christine Lagarde said on Thursday.

“If you look at the overall map, the United States is probably the only major economy that is likely to buck the trend this year, while others are being held back,” Lagarde stated during a speech at Council on Foreign Relations.

IMF director said that low oil prices and a stronger recovery in the United States do not signal of global economic recovery.

© Flickr / Javier Ignacio Acuna Ditzel
IMF Says Pressure on Russian Currency Can Impact Whole Region
“Despite the boost from oil and despite a stronger US growth, we see the global recovery continuing to face a very strong headwind,” Lagarde said. “There are powerful factors, legacies of the crisis that are still with us and that are weakening our economies.”

The majority of countries are weighed down by high debt and high unemployment today, the IMF director explained.

“Too many companies and households keep cutting back on investment and consumption today because they are concerned about the growth tomorrow,” Lagarde added.

The economic growth remains low in the European Union and Japan, and the emerging economies that were the “drivers for growth” couple of years ago are slowing down, she said. However, there may be a promising recovery in the United Kingdom in 2015, she added.

The IMF will release its latest economic forecast for 2015 next week.

Since June 2014 the oil price has fallen by more than 40 percent and now is at a point of less than $50 a barrel. The Organization of Petroleum Exporting Countries failed to agree on production curbs during a November meeting, and prices continued to fall.