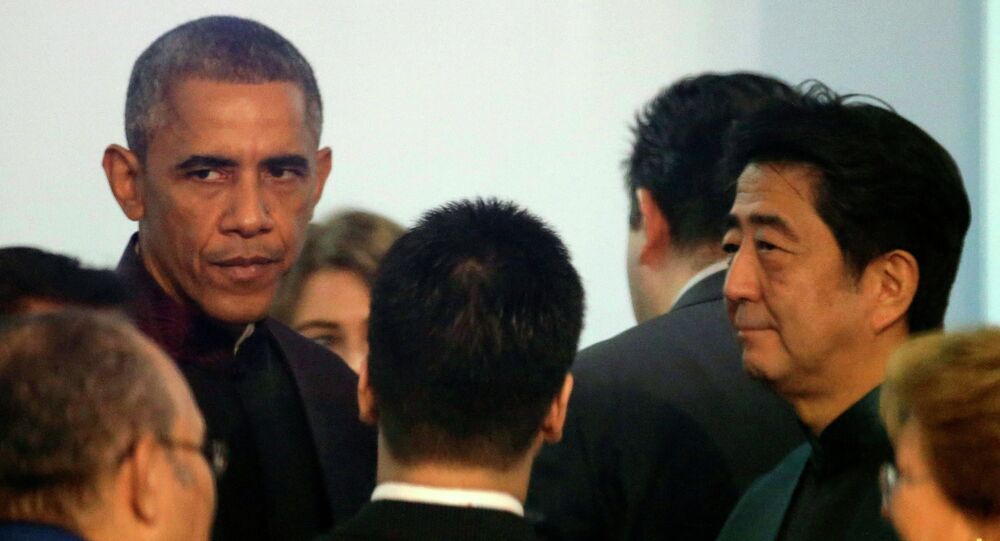 US President Barack Obama and Japan’s PM Shinzo Abe have said the Trans-Pacific Partnership (TPP) agreement is close to be finalized, with the main obstacle being US-Japan differences on trade in agricultural goods, about to be overcome.

MOSCOW, November 10 (Sputnik) — US President Barack Obama and Japan’s PM Shinzo Abe have said the Trans-Pacific Partnership (TPP) agreement is close to be finalized, with the main obstacle being US-Japan differences on trade in agricultural goods, about to be overcome.

US President Obama said the driving force behind the TPP is to strengthen trade relations. Obama made his remarks soon after he arrived in Beijing to participate in the Asia-Pacific Economic Cooperation (APEC) forum and meet China’s leader Xi Jinping as part of his eight-day Asia tour, as reported by Reuters.

Obama previously said that no major decision on the TPP will take place during the APEC forum, adding that the most significant obstacle for the further progress is a US-Japan trade dispute regarding the island nation’s agricultural imports. He said the obstacle would soon be overcome however.

"During the past few weeks our teams have made good progress in resolving several outstanding issues regarding a potential agreement. Today is an opportunity for us at the political level to break some remaining logjams," Obama announced during a gathering of TPP-involved leaders at the U.S. embassy.  “What we are seeing is momentum building around a Trans-Pacific Partnership that can spur greater economic growth, spur greater jobs growth, set high standards for trade and investment throughout the Asia-Pacific.”

Obama’s sudden optimism at the TPP progress may be motivated by China’s advances in luring Asia-Pacific nations into a similar multilateral trade initiative, the Free Trade Area of the Asia Pacific (FTAAP). The TPP excludes China, offering the nations of Indochina, Latin America and Oceania greater trade benefits with Australia, New Zealand, Japan, Singapore, South Korea, Taipei, the US, Canada and Singapore.  The China-backed FTAAP project, in turn, is based on the ASEAN plus China, Japan and South Korea principle, excluding the Americas and Oceania.

The leaders of the TPP negotiations said in a statement today that “Ministers and negotiators have narrowed the remaining gaps on the legal text of the agreement and that they are intensively engaging to complete ambitious and balanced packages to open our markets to one another… With the end coming into focus, we have instructed our Ministers and negotiators to make concluding this agreement a top priority.”

The now-Republican-controlled Congress surprisingly will not be an obstacle to Obama’s push for the conclusion of the TPP. GOP congressmen have welcomed the initiative for international trade liberalization, a move particularly important for the broader US strategy of ‘rebalancing’ its political and economic focus to Asia-Pacific. The TPP will come in handy as a tool to support America’s politics in the world’s fastest-growing region.

Japan’s PM Shinzo Abe said earlier that his government is instructed to conclude the deal with the US. “I think it (TPP) is arriving at the final stage,” Abe said as quoted by the Washington Post. Abe is hoping to boost growth and get Japan out of its 15-year deflationary period through liberalized trade. Along with the massive stimulus, the TPP will help Japan flood the less industrialized nations like the US, Australia or Peru, with its electronics and other manufactured goods.

“My mission is to make sure that the Japanese economy really gets out of the deflation that has continued for more than 15 years,” Abe told the Washington Post.
For his part, Obama is meeting his APEC counterparts. The US President will also attend a regional summit in Burma and a G20 summit in Brisbane, Australia. Several diplomatic victories won during these meetings would sure make up for his party’s recent midterm failures.

US Economy Expands 3.5% in Q3, Still Far from Prosperity