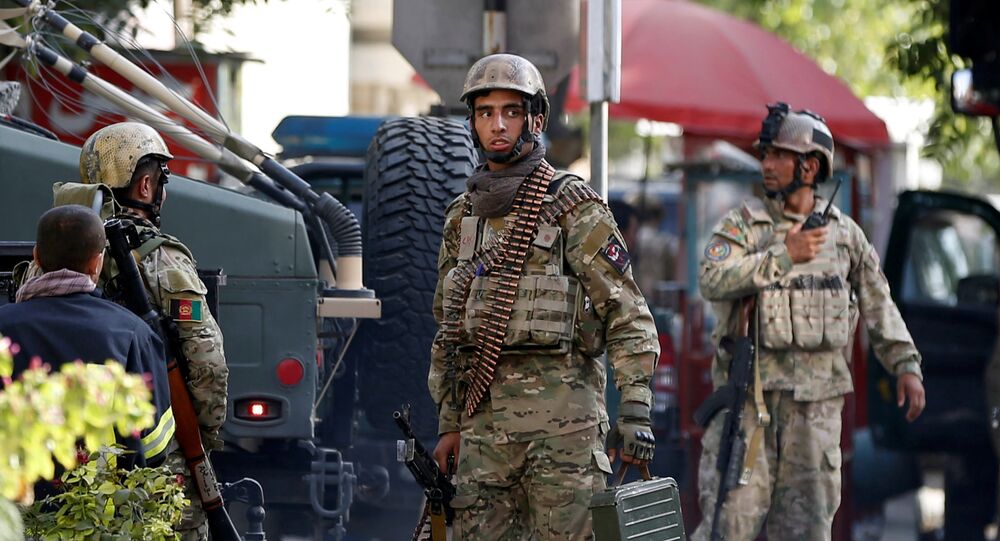 Afghans Using Weapons Transferred by US to Defend Their Country, Security Adviser Says

MOSCOW (Sputnik) - The United States has already handed over to the Afghans most of the weapons it was planning to give, and they are using them to defend the people and territorial integrity of the country, the Afghan president's national security adviser, Hamdullah Mohib, told Sputnik.

"So, they will be handing over some equipment, but most of it has already happened. And we're using it as we speak and defending the Afghan people and Afghanistan's territorial integrity", Mohib said when asked if the US would transfer the remaining military equipment to Afghan government forces after leaving the country.

Most of the US troops have already left, with only a limited number of soldiers left, "and those troops were involved in training and advising and assisting capabilities", the adviser said.

© REUTERS / STRINGER
Armed men attend a gathering to announce their support for Afghan security forces and that they are ready to fight against the Taliban, on the outskirts of Kabul, Afghanistan June 23, 2021.

The United States and NATO officially began withdrawing from the country in May. This comes more than a year after the United States and the Taliban radical movement reached an agreement, where the pullout of foreign forces from Afghanistan was one of the conditions. They also agreed that the Taliban and the Afghan government should begin talks.

At the same time, the national security adviser noted that the government is struggling to see a positive response from the Taliban militants.

"We, unfortunately, have not seen enthusiasm or good faith efforts from the Taliban for peace talks so far", Mohib said.

He noted that Afghan forces expect to retaliate against the Taliban movement's recent offensive.

The government forces are "absolutely" planning a counterattack, Mohib said.

"The Taliban used the vacuum in which the Americans and other international troops were retrograding and launched an unannounced offensive. And that took many of the Afghan security forces by surprise. Because like I said, we were expecting peace, not war", he said.

Yet, the people of Afghanistan are "determined" and want to "live in freedom", Mohib continued.

"We want to see the Taliban included in the government and be represented, but Afghans are not ready to have the Taliban dominate all of Afghanistan and dictate the way Afghan people must live", the security adviser said.

As serious as the situation is, the government hopes that it will not completely lose control of the north, Mohib said.

"The Afghan national defence and security forces along with the people who have come to support them are working to manage the security situation there", the security adviser said.

In the last few weeks, the Taliban has intensified its offensive amid the gradual pullout of international forces. The withdrawal of foreign troops was one of the points in the deal the Taliban and the United States reached in February of last year. The beginning of the dialogue between the Taliban and the Afghan government was another point.

Balance of Power in the Region

"As far as I am aware, this is not the case. I think, there has been some misreporting about it. In our own discussions with the Americans, they are not seeking any kind of bases anywhere", he said, adding that "if there is a discussion of that nature, I am not aware of it".

At the same time, Afghanistan does seek technical support from the region, according to the official.

"For example, we have helicopters that are Russian-made, Mi-17 helicopters. We seek to repair them when they need repair, and for that we are looking to Central Asia, as they also use these same facilities and have borders with us, to see if they can assist", Mohib explained.

The adviser stressed that in relations with Moscow, Kabul wants to focus on the threats both countries face, rather than secure supplies of weapons.

"We are not talking about military support in that nature, but what we had our discussions about is how do we have a shared vision and shared understanding of the threats that we are all faced with, Afghanistan and the region", Mohib told Sputnik, when asked if there were discussions of arms supplies from Russia.

The understanding between the two countries could include sharing information as well as technical capabilities, the Afghan security adviser said.

"But it doesn't need to be the kind of support that everybody is thinking about, perhaps. We, in Afghanistan, are not seeking for someone else to intervene," Mohib told Sputnik.

US troop pullout from Afghanistan presented the government with an opportunity to join forces with Russia and regional powers to deal with the extremist threat "in a more collaborative manner," the adviser said.

"It is our responsibility. We think that there is a good understanding that exists but it can be improved, and we talked about how we can put in mechanisms to better our understandings", he said.