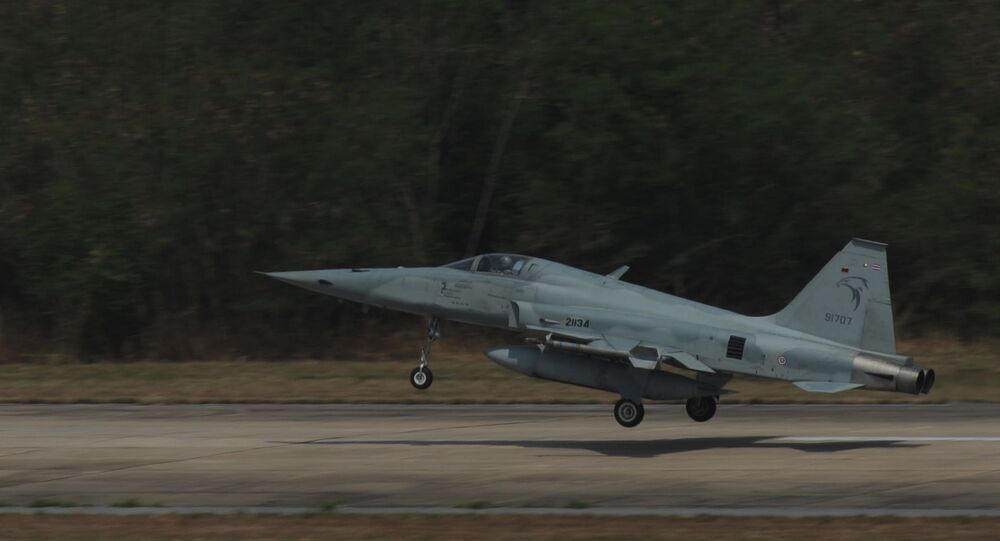 Taipei ordered all of its F-5E Tiger II fighter jets grounded on Thursday after a jet crashed shortly after takeoff and the pilot died in a parachuting mishap.

During a routine training mission early Thursday morning, a Taiwanese fighter jet suffered an engine failure and plunged into the sea shortly after takeoff, the Taiwanese Ministry of National Defense announced. The F-5E Tiger II fighter jet was just two minutes out of Chihhang Air Base, on the island’s eastern side.

The pilot, 29-year-old Chu Kuan Meng, safely ejected from the plane but became tangled in his parachute strings amid heavy winds and drowned after landing in the sea, China’s Global Times reported.

Sputnik Screenshot
The tail section of a Taiwanese Air Force F-5E Tiger II fighter jet that crashed on the morning of October 29, 2020

Taiwanese Air Force Chief of Staff Huang Chih Wei told reporters at a news conference the jet was engaged in "basic combat and defense training" and under normal circumstances would not have crashed due to the loss of just one of its two engines. However, such a loss does reduce maneuverability, he noted.

A UH-60M Black Hawk search helicopter located Chu’s body roughly 45 minutes after his plane went down and transported him to a local hospital, where he was pronounced dead.

“We are still investigating the exact cause of the crash,” Huang said, noting the entire F-5E fleet was grounded until further notice.

The F-5 is a twin-engine light fighter jet introduced by Northrop in 1962, intended as a cheap, reliable fighter jet that US allies could purchase instead of advanced interceptors like the F-4 Phantom II. Northrop built close to 4,000 F-5s in various configurations, and the jet served as the starting point for designing what became the F/A-18 Hornet, now the US Navy’s bread-and-butter fighter jet.

The F-5 was also notoriously featured in the 1986 film “Top Gun,” in which it played the fictitious “MiG-28” interceptor.

In the 1990s, when Taiwan received more advanced F-16 Falcon fighter jets from the United States and Mirage 2000 jets from France, the F-5Es became second-line reserve aircraft that will be phased out in the coming years as the new T-5 “Brave Eagle” trainer jet enters service.

Retired Taiwanese Air Force Lt. Gen. Chang Ting Yen told the South China Morning Post the service has roughly 40 F-5Es. “They have been used for more than 40 years, and mechanical problems would be inevitable,” he said.

The defense ministry noted the ill-fated aircraft had been manufactured in 1980 and flown for more than 6,260 cumulative hours over the course of its life.