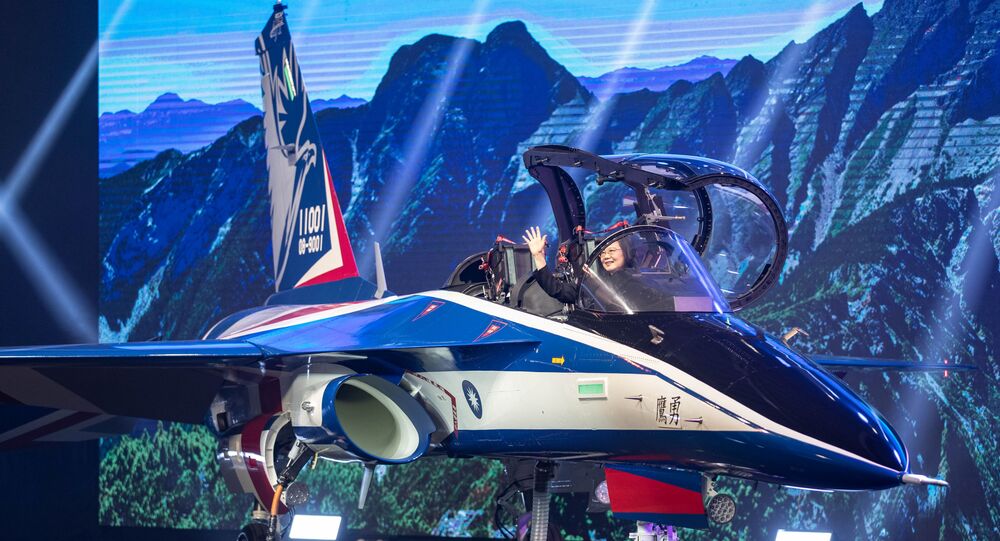 Taiwan debuted its “Brave Eagle” jet trainer prototype on Tuesday in the city of Taichung as part of its strategy to boost its defense program amid tensions with mainland China.

“Through the construction of the [Brave Eagle], we have not only increased global exchanges [on production], but have also created job opportunities ... to promote talent at home,” Taiwanese President Tsai Ing Wen said during a Tuesday ceremony, the South China Morning Post reported. The Taiwanese Defense Ministry also revealed Tuesday that its new trainers would replace the country’s aging AT-2 Tzu Chug jet trainers and F-5E/F Tiger II fighters, which were made by the US.

"If we still relied on importing advanced jet trainers, our research and development capability of military aircraft and vessels would stand very little chance of surviving,” Tsai is also quoted as saying on Tuesday, Kyodo News reported.

According to Tsai, the $2.2 billion project to build the Brave Eagle prototype has generated 1,200 jobs at the Aerospace Industrial Development Corporation (AIDC) in Taichung since 2017. The project is expected to create another 800 jobs by 2021. The jet trainer is expected to embark on its maiden flight next summer, while at least 66 other Brave Eagle trainers are expected to be built at the AIDC by 2026, according to the South China Morning Post.

An AIDC manager, whose identity was not revealed, also said that the corporation plans to build four prototypes of the jet trainer: two for ground testing and two for flight testing, Kyodo News reported.

Beijing considers self-governing Taipei - lying just 100 miles or so off the Chinese mainland - to be part of its territory and claims sovereignty over the island. Taiwan, however, still bears the name of the pre-Communist-era government, the Republic of China, whose territorial control was confined to the island at the conclusion of the civil war in 1949, when the People’s Republic of China was established on the mainland. Taiwan has repeatedly rejected Beijing’s claim.

In May, the US House of Representatives unanimously passed the “Taiwan Assurance Act of 2019,” which urges Taiwan to increase its defense spending. Additionally, the act states that the US should allow “regular sales and transfers of defense articles” to Taiwan and should defend the island’s participation in international organizations.

Last month, the Pentagon formally approved an $8 billion contract for the sale of 66 upgraded F-16C/D “Viper” Block 70 fighter planes and related equipment and support to Taiwan, despite earlier warnings from Beijing not to do so, Sputnik reported.