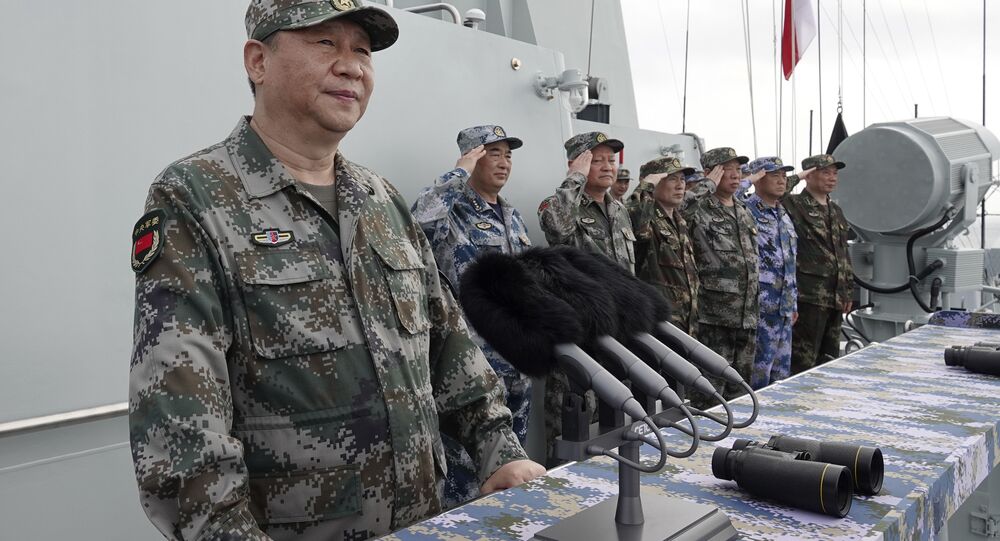 The tensions between Washington and Beijing have been escalating amid the US continuing its military operations in the disputed South China Sea, developing ties with Taiwan and accusing China of allegedly being responsible for the global coronavirus pandemic.

Chinese President Xi Jinping has urged People's Liberation Army servicemen to "maintain a state of high alert" and "put all (their) minds and energy on preparing for war" during a visit to the Marine Corps in Chaozhou City in the southern province of Guangdong. He continued by calling on the troops to be "absolutely loyal" and "reliable" in these times without elaborating on the reason for such an address.

Xi Jinping's statements come amid continuing tensions between China and the US on a variety of issues. In the most recent development, Beijing condemned Washington after one of its destroyers, USS John S. McCain, was spotted sailing in the area near the Parcel Islands in the disputed South China Sea. China, which controls most of the sea riddled with territorial claims from five countries, blasted the ship's actions, as the US Navy never requested permission for its vessel to enter territory Beijing deems as being within its territorial waters.

Such incidents, which China lambasts as "provocations", are not rare, as the US regularly sends its ships to the region under the pretext of freedom of navigation operations. The Chinese authorities have repeatedly warned Washington that one day its actions might lead to an incident at sea and accused the White House of militarising the South China Sea and preventing the local governments from sorting out their mutual territorial claims.

TAIWAN PRESIDENTIAL OFFICE
Taiwan 'to Issue Wish List of Weapons From the US' Amid Rising Tensions With Beijing
In addition to the South China Sea tensions, the two states have been in a row over Washington developing unofficial diplomatic ties with Taiwan, as Beijing considers the island to be an inalienable part of its own territory. The White House recently announced its plans to supply Taiwan with advanced weapon systems, including High Mobility Artillery Rocket Systems, triggering a harsh condemnation from China and essentially violating the One-China policy Washington has adhered to for decades.
...
Reddit
Google+
Blogger
Pinterest
StumbleUpon
Telegram
WhatsApp
9016