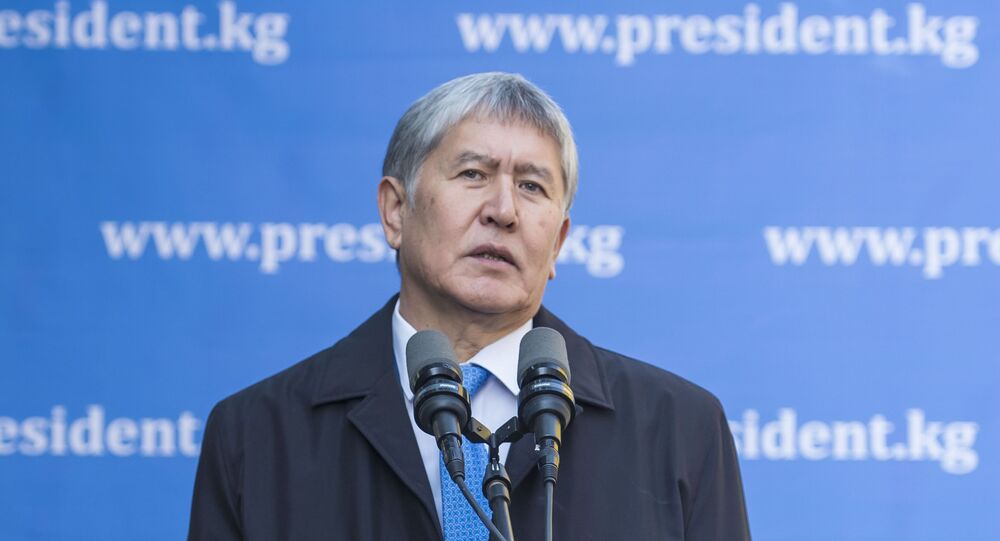 Atambayev was recently released from prison by protesters, who took to the streets of the Kyrgyz capital after dissatisfaction with the results of the parliamentary election on 5 October.

Aide to former Kyrgyz President Almazbek Atambayev, Kunduz Zholdubaeva, has stated on her Facebook page that the ex-head of state survived an assassination attempt. She shared that his car was shot at with live rounds as it drove through Bishkek, but the former president was not injured in the attack. The news of the assassination attempt comes in the wake of reports of shots being heard amid ongoing clashes in the country's capital.

Zholdubaeva, also shared several videos featuring Atambayev, one of which appeared to show marks purportedly left on his car by the bullets shot at him.

In another video, shared by the aide, Atambayev said that information about an assassination attempt in the works had been known to him since 8 October. He alleged that some of the top members of the Kyrgyz State Committee for National Security helped to organise the assassination attempt. The former president specifically linked the organisation of the attack with a "clan" headed by the former deputy head of customs Raim Matraimov and President Sooronbay Jeenbekov.

"They think that if they kill Atambayev, all [of the protesters] will scatter. It will not work that way", the former Kyrgyz president alleged.

Atambayev added that despite an attempt on his life, he is not planning on leaving the country.

Kyrgyzstan's capital has been engulfed by protests since 5 October, when the first results of the parliamentary elections were published, revealing that almost none of the opposition parties made it past the threshold needed to be in the legislative body. Protesters accused the government of rigging the election, prompting the government to announce a new election and Prime Minister Kubatbek Boronov to resign. Demonstrators also seized several government buildings in Bishkek, including the parliament and managed to free Atambayev from prison.

The former president was detained in August 2019 on charges of corruption and was accused, among other things of allegedly plotting to overthrow the Jeenbekov government. He denied the accusations and successfully fought off the initial raid on his residence, but surrendered to law enforcement the next day. His prosecution became possible after he was stripped of his presidential immunity by the Kyrgyz parliament in 2019.

One of Injured Kyrgyz Protesters in a Coma, Doctors Say