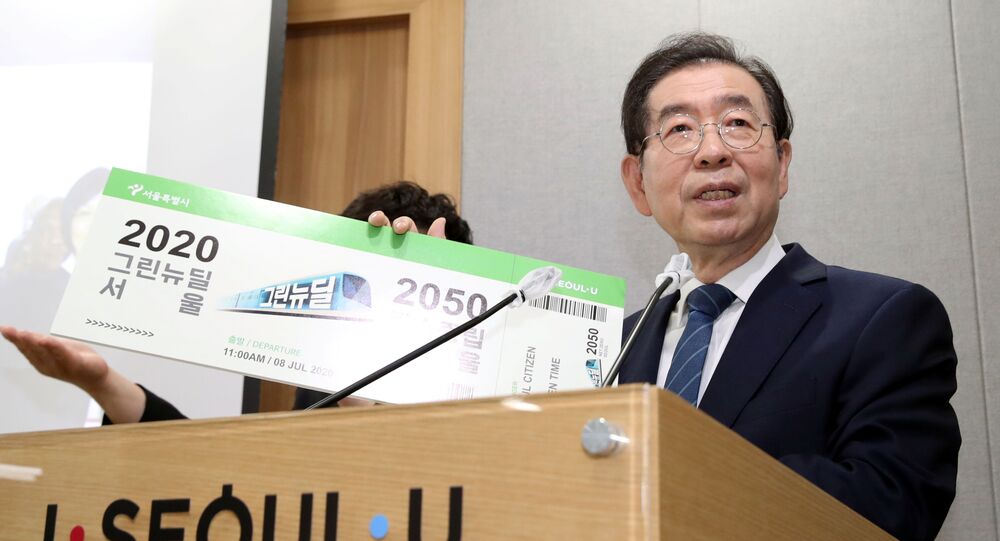 TOKYO (Sputnik) - Seoul Mayor Park Won-soon, who was found dead in the woods of Mount Bugak not far from his residence, cancelled a working lunch with South Korean Prime Minister Chung Sye-kyun on the day of his disappearance, saying that he was feeling unwell, the Yonhap news agency reported on Friday, citing officials.

Park’s body was found late on Thursday after an hours-long search involving hundreds of police officers, dogs and drones. The 64-year-old's daughter reported him missing four to five hours after he left home.

She said he left her a "will-like" verbal message. According to Yonhap, the mayor is presumed to have committed suicide as he left a note in his residence where he said that he was "sorry" to everyone, mentioned that he was sorry specifically for "causing only pain" to his family, and asked to be cremated.

The mayor called the prime minister on Thursday and cancelled lunch, which was scheduled well in advance, but the officials were not planning to discuss anything specific, the news agency continued.

Chung and the ruling Democratic Party lawmakers have offered messages of condolences to Park’s family.

"Mayor Park, who has served Seoul citizens for a decade, was found passed away. I pray that the deceased rest in peace," Chung said, as quoted by the news agency.

The Seoul government said that the mayoral funeral ceremony is scheduled to start on Monday and will be held for five days. Usually, funerals in South Korea last for three days.