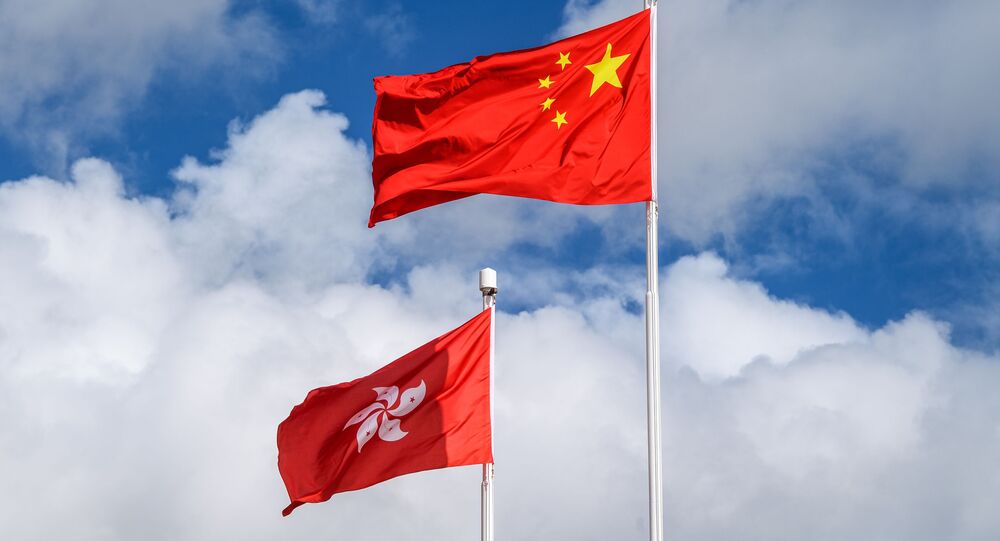 Experts said these arrangements showed the spirit of the "one country, two systems" and the cooperation between the central government and the HKSAR government for better law enforcement.

The law clearly defines the duties and government bodies of the HKSAR in safeguarding national security; the four categories of offences - the act of secession, subversion, terrorist activities, and collusion with a foreign country or external elements to endanger national security - and their corresponding penalties; jurisdiction, applicable law and procedures; office of the central people's government for safeguarding national security in the HKSAR; and other contents, according to Xinhua News Agency on Tuesday.

"Dedicated units in the Hong Kong Police Force and the Department of Justice will be responsible for implementing relevant legal provisions stated by the National Security Law," Lam said. According to the law, the new committee includes a national security advisor that will be designated by the central government to assist, advise and supervise the chief executive to handle national security affairs in Hong Kong. This arrangement is different from the national security committee in Macao, another SAR of China that is also implementing the "one country, two systems."

"Hong Kong has been used as a centre for international intelligence exchanges since long ago, but unfortunately, whether before or after 1997, officials in Hong Kong have not been trained to handle national security affairs in a very long time, so they need special assistance from the central government," Li noted.

The advisor's role will be significant as he/she will provide unique support to the HKSAR government's decision-making on anything related to national security, and "to some extent, just like the National Security Advisor to the US President," Li said.

According to the law, the central government office for safeguarding national security has the power of jurisdiction in the HKSAR, and the office is beyond the administration of the HKSAR government.

The HKSAR must provide the necessary convenience and coordination to the office while the office executes its duties. Observers said this makes the central government the ultimate authority in the SAR when handling national security cases, and such authority has been forced upon by foreign forces and local separatists due to last year's massive turmoil.

Li said now the central government believes "there is no need to be gentle anymore."

The central government office, rather than Hong Kong law enforcement departments, will handle cases under the following three conditions: involvement from foreign forces with the HKSAR government being deemed unable to handle the case； the HKSAR government failing to properly enforce the law, and the national security is seriously threatened, the law stipulates.

Tian Feilong, a legal expert on Hong Kong affairs at Beihang University in Bejing, said that the Committee for Safeguarding National Security will verify the cases to see whether the HKSAR government or the central government office in Hong Kong should handle the case, the advisor will help the chairman and the whole committee to make a decision, and if they can't come to a conclusion, the central government office for safeguarding national security would make the final call.

"Once a decision has been made, if the case goes to the central government office, from the first page of the case file, it would be irrelevant to the HKSAR government and jurisdiction organs, so there will be no extradition," Tian noted.

Observers said this kind of situation is unusual and would occur only under special circumstances; and if it does happen frequently, then it means national security issues in Hong Kong are extremely serious.

Lau Siu-kai, a vice president of the Chinese Association of Hong Kong and Macao Studies, said national security cases are not normal criminal cases, because they are closely related to the security and development of the country, so it's an international norm in most countries around the world that agencies responsible for national security affairs have special and even ultimate authority.

As the law has come into effect, the Hong Kong Police Force will set up a national security branch on Wednesday to handle related work, according to Xinhua.

And the law states that the new branch can recruit special professionals and technical personnel from regions outside Hong Kong. Observers said this means those police officers from the mainland can also join this branch and serve as Hong Kong police, which is a significant breakthrough for filling in the gap of talent regarding the Hong Kong Police handling national security cases.

Tang King-shing, a former commissioner of the Hong Kong Police Force (2007-11), told the Global Times on Tuesday that there is no denying that, over a very long period, Hong Kong has had a shortage of talents handling cases regarding national security, and Hong Kong police and officials have not been trained for this and have no vision on national security, so it's essential for the new branch to recruit talent from outside.

The duties of the new branch include intelligence gathering and analysis, investigation, and other missions from the Committee for Safeguarding National Security.

The branch and the central government office are law enforcement agencies handling similar cases but observers said they would cooperate with each other rather than conflicting with one another.

© REUTERS / Laurel Chor
Hong Kong National Security Law Gives Right For 'Final Say' to Central Gov't
The ties between the two will be cooperative and complementary because the Hong Kong Police are more professional regarding law enforcement in Hong Kong, and more familiar with the local situation, while the central government office is able to handle foreign forces and capable of gathering intelligence and even executing operations outside Hong Kong, said Tang.

"Hong Kong police can only enforce the law in the SAR, but sometimes, a national security threat from outside may emerge, so in order to detect and eliminate the threat, the central government office's role is essential. The coexistence and cooperation of the two law enforcement agencies show the spirit of the 'one country, two systems'," Tang noted.