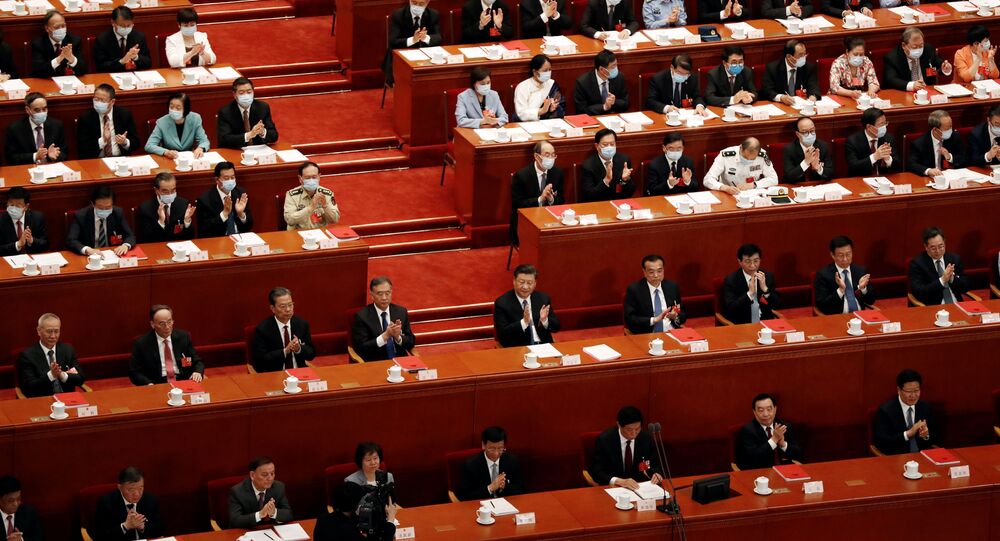 Protests have erupted in Hong Kong in recent days over two controversial bills, which are being reviewed by the Chinese parliament. One of the bills seeks to outlaw secessionism in the territory, while the other stipulates hefty fines or jail terms for those ridiculing China's anthem.

China's parliament has overwhelmingly passed a resolution to draft a law on national security in Hong Kong. In total, 2,878 lawmakers supported the resolution, while one voted against it and six others abstained.

Under this resolution, the National People's Congress Standing Committee will be in charge of developing a bill on security for Hong Kong.

The South China Morning Post had reported earlier in the day that the law could enter into force by August.

© AP Photo / Kin Cheung
US Reportedly Poised to Strip Hong Kong of Preferential Tariff Rates Amid Rising Tensions With China
A senior legal source told the newspaper that offenders under the new law will face open trials in Hong Kong after the law is passed but won’t be sent across the border to the mainland for trial.

According to the newspaper, the new legislation would require Hong Kong’s regional government to set up new institutions that would guarantee the safety of civilians. Chinese Foreign Minister Wang Yi has called for the legislation to be enacted without delay, and the bill has the support of leading Hong Kong politicians, including Chief Executive Carrie Lam.

The security legislation, as well as another bill that would forbid Hong Kong residents from disrespecting the Chinese national anthem, has triggered a wave of protests over recent days. More than 500 demonstrators have been detained over the past week, including many individuals carrying deadly weapons, law enforcement officials in the region have said.

US Secretary of State Mike Pompeo has told Congress that Washington will be forced to reassess the level of autonomy in Hong Kong while the new legislation is being discussed. National Security Adviser Robert O’Brien has already hinted that Beijing may face sanctions if Washington concludes that Hong Kong’s autonomy has been compromised.
Russian Foreign Minister Sergey Lavrov has hit back at Washington for getting involved in China’s domestic affairs. Beijing considers the ongoing political situation in Hong Kong to be a purely domestic matter.