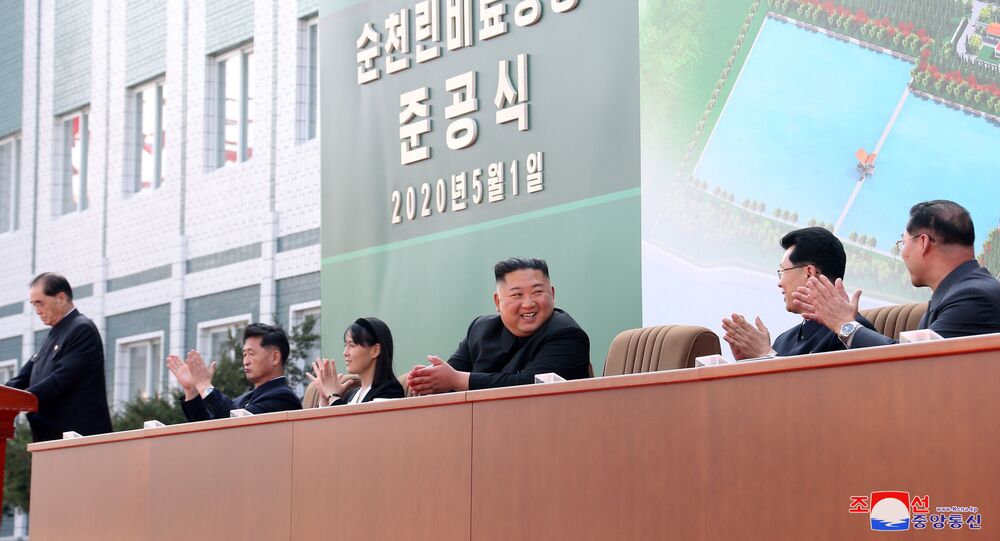 The leader of the DPRK has been absent from the public eye for 20 whole days, which fueled rumours on various social media that he was gravely ill or had even died.

The North Korean media has published pictures of North Korean leader Kim Jong-un from 1 May celebrations after reports of his first public appearance in 20 days.

The images show Kim opening the Sunchon Phosphatic Fertilizer Factory in the city of Sunchon, north of Pyongyang. The North Korean leader smiled, gesticulated, and talked to other people, who wrote down his remarks.

© REUTERS / KCNA
North Korean leader Kim Jong Un attends the completion of a fertiliser plant, together with his younger sister Kim Yo Jong, in a region north of the capital, Pyongyang, in this image released by North Korea's Korean Central News Agency (KCNA) on May 2, 2020

Close-up of Kim at the ribbon-cutting ceremony leads page 1: pic.twitter.com/5dePPk6a8W

Kim was accompanied by his sister Kim Yo Jong and many senior North Korean officials. However, the ceremony was not attended by Choe Ryong Hae, the president of the Presidium of the Supreme People's Assembly, who is considered to be the second most powerful politician in the country.

KJU was reported to have attended a ribbon cutting event at the Sunchon fertilizer factory to mark May 1’s International Labor Day, making it his first public appearance in state media in 21 days. https://t.co/LAeDR8b2DE pic.twitter.com/0FBVlUWgZF

Earlier in the day, South Korean state news agency Yonhap reported that Kim had made his first public appearance in 20 days.

His previous appearance took place on April 12. After media reports about Kim's surgery, some news outlets reported about the leader's death.

US President Donald Trump earlier indicated that he had "a very good idea" about Kim's status but could not publicly disclose it. Trump also said he wished Kim well.